Royal Commission Synopsis So Far – And Other News

With the public hearings at the royal commission on hiatus for the next few weeks it’s a good time to take stock and have a brief look at what was revealed. 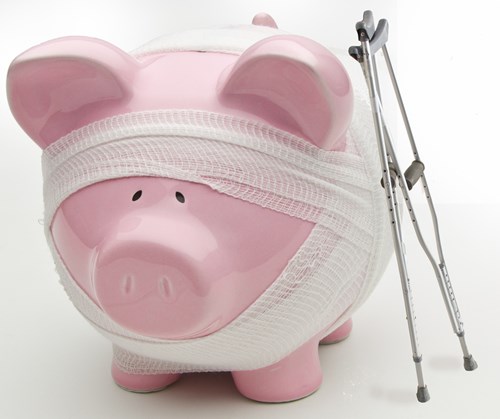 With the public hearings at the royal commission on hiatus for the next few weeks it’s a good time to take stock and have a brief look at what was revealed. There was plenty of eye watering stuff from individuals and institutions for the average punter to get their head around. Remember – the last couple of weeks have only looked at financial advice, we still have quite a few months of the RC to run yet! We’ve got some of the high and low lights here - and a little bit more to boot...

Here’s a brief run-down of some of the bad form displayed by the institutions:

NAB - Thousands of National Australia Bank customers have had their planners falsify documents relating to their finances, a senior executive has told the banking royal commission, admitting that the practice was a "social norm" within the bank.

AMP – Charged fees for no service, misled ASIC (hastening the departure of their CEO and Board Chair), making customers self-request refunds for advice they hadn't received (but didn't know they hadn't received). Manipulated an external investigation into itself.

ANZ - forged signatures, impersonation of customers, fraudulent use of power of attorney, remuneration structures for advisers not in consumer's interests (eg. remunerated on revenue, even if that meant writing the consumer into debt or the wrong product for them)

Westpac - Potential class action challenging the basis for loan security, high risk lending to consumers for mortgages - only one out of 10 lending controls required by the prudential regulator were operating effectively.

Dover – Appeared not to comply with RC requirements, employed planners who had been terminated by other financial institutions for misconduct, allowed planners to audit themselves. All this mentioned before the Dover chief collapsed on the stand after being accused of lying, which cut short his testimony.

AMP, National Australia Bank and Westpac have all made payments that breached a 2013 ban on banks and wealth management businesses from paying kickbacks to advisers

Big Players Moving Out Of Wealth

The news was pretty much all bad for the institutions put in the dock at the royal commission. While they are loathe to admit it, expectations of the public revelations from the RC, combined with poor performance will have played a part in the fact that the big banks – with the exception of Westpac all appear to be preparing to exit the “wealth management” businesses.

Whilst the RC findings have made very public the suspected bad behaviour of elements in the finance sector, industry has been well aware of the problems involved for a long time. As NAB chief Andrew Thorburn has said – “there was nothing new, to NAB, in what had emerged in the royal commission about the failings of the advice sector. It was all known to NAB and the regulator, the Australian Securities and Investment Commission.” Given the repeated reviews and inquiries into the sector – it is a pity, and a black mark against all those concerned, that the issues haven’t been able to be dealt with appropriately previously. In fairness, this CEO was probably directing his comments not to “Joe Public” – but to anxious shareholders who may have been spooked by the commission’s findings. With months of the RC yet to run, there is no doubt investors, along with bank executives will be as nervous as a long tailed cat in a room full of rockin’ chairs, awaiting further revelations from this particular inquiry.

Is Vertical Integration a Problem?

One of the most hotly contested issue is that of “vertical integration” of the industry. VE is the strategy where a company expands its business operations into different steps on the same production path, such as when a manufacturer owns its supplier and/or distributor. This makes sense for some industries, but in financial advice, when there are regulations around “best interests” about the products that are sold – it can be said the banks and other independent groups who manufacture their own products, might not be the ones best placed to do the selling – this may mean at the end of this Royal Commission the traditional benefits of vertical integration could become redundant, and in fact, start making VE work against the owning company because the suppliers it “owns” are selling opposition product.

It has been interesting to hear some of the commentary around vertical integration as industry ties itself in knots downplaying its effects. As one CEO said;

“…the problem for the banks generally isn’t so much the vertical integration of their wealth management units, nor particularly the co-existence of banking and wealth management. The rotten core of the issues aired at the royal commission is the character, conduct, competency and conflicted behaviours of some advisers and the financial incentives that drive/corrupt some of the advice.”

However, Morgan Stanley and others have oft stated that the vertically integrated model is here to stay. The argument is that it provides broad research teams, a stringent approach to what products are created and sold on an advisers approved product list and economies of scale, not the least access to technology and other in-house efficiencies.

Time will tell as to how the consumer will react...

The industry has tried to self-regulate and explain away the criticisms, saying that aligned advisers were able to sell financial products from other suppliers (other banks) and most advisers had an average of 80% of products they sold originating from other suppliers. However, a recent ASIC study of the largest players showed that in practice, that figure meant little, as nearly 70% of money invested by advisers was directed to in-house (owner supplied) products. In this sense, vertical integration was working at about 70% capacity. Not bad from the owners point of view, particularly in a market where competition is mandated. 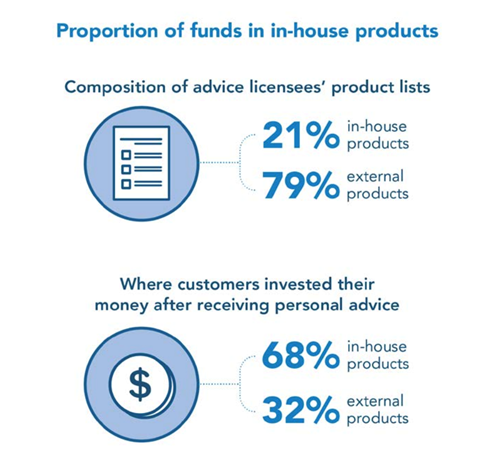 The shake-up in the wealth management sector that is to come, will almost certainly see the number of “aligned” practices decrease. Currently, around 35% of all advice practices are owned or affiliated with the 6 major institutional players, including the big 4 banks. The table below shows "these Big 6" players in the advice space, by adviser numbers. 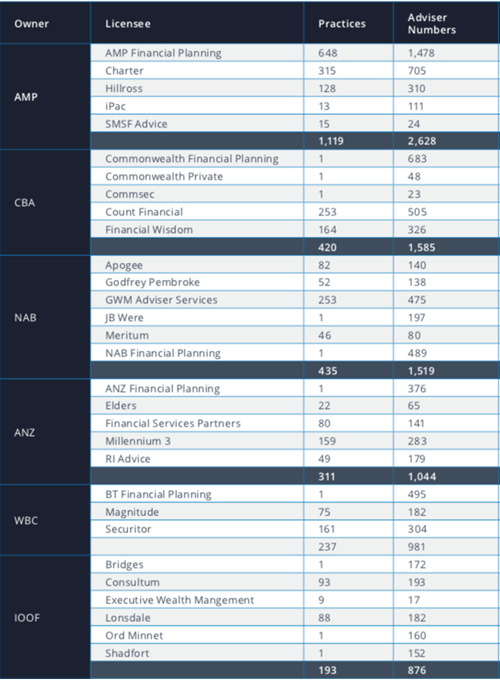 Note - iPac practice numbers have been consolidated; Commonwealth Private and Commsec have been included under CBA's remit for this table.

How it pans out remains to be seen. There will undoubtedly be growth in the size of smaller licensee’s and we are seeing an increase in the number of smaller firms holding their own license.

With all that said, we know many of our subscribers to this newsletter are far better off by seeking financial advice than those who have not, $90,000 on average in fact.

For now, we’re just thankful there is a break in the public hearings – we’ve been pumping out plenty of commentary over the last two weeks and our fingers are pretty keyboard weary. If you’d like to check out some of our other musings, have a look at the latest article in our DIY Personal Finance tab – where all our articles are housed. Some of the more recent popular ones on the revelations and proceeding from the royal commission are here, here and here.

"All planners should be independent of product providers,with products being approved by ASIC or an affiliate. ASIC should be staffed by forensic planners or accountants and not lawyers Audits should be risk based and ASIC held accountable for its performance by the Parliament."

"For the CEO quoted in this article about the “rotten core...”, he / she has hit the nail on the head. Working with advisers everyday, I see the advice they provide that is conflicted because of the incentives and subtle pressures from their licensee to sell an in-house product. It leads to lack of objectivity in product recommendations to clients and lack of research on other non - licensee related products that would have been more appropriate. As for the introduction of BID, that obviously hasn’t worked. Vertical integration definitely plays a big part but ethics and an industry that has a long history around ‘making a sale’ and being paid via a product, over providing a valuable service, is just as much to blame."

"1_I know over 400 advisers under Dover that have their SoAs and RoAs audited on a daily basis. The AFSL is vetting the advice before the AR can then present it to the client. By the way the SoAs are vetted from Lawyers qualified financial advisers. NOT IN VIETNAM. 2_Dover has always been following a very strict procedure when taking on board new advisers in fact only 1 out of 4 ultimately is taken on board. Within the on-boarding process advisers have to provide( 2 SoAs, Audit reports, reference check from previous dealer groups & Compliance Manager and BDM's from different product providers, Bankruptcy check, Police check, qualification of FP, CV and much more. Apparently someone is upset because of the quick growth of Dover in the industry but in fact they don't understand that Terry McMasters has established a business that is making the difference to a lot of families and retail clients from all over Australia. Dover Doesn't impose KPI's to the advisers nor does have any relationship with any product. They charge a flat fee based on the service provided to the adviser. 6 client complaints in 10 years are pretty damn good to show how strict is the compliance team when reviewing every piece of advice!!! "

"Hopefully the Royal Commission will be the needle that lances the boil of festering content in this industry. The banks should get out of ownership and leave larger licensee as the main arbiters of whether a financial product is good or not. If commissions have to be paid - as they are accepted for insurance because we're chronically underinsured - make it a flat rate across the industry so advisers are not tempted to advise on one over another based on what they'll get. Removing this potential conflict allows the advisers to recommend a product based solely on it's benefit to the client. Fee for service will dominate and the advisers, practices and licensee's that come up with an effective pricing model will be the winners in the new landscape."