The AMP brand has faced mounting challenges since the Hayne Royal Commission delivered its final report in February 2019. Concurrent with the rest of the industry, adviser numbers at AMP, Australia’s largest advice group, are continuing to fall across all of their aligned brands. The reasons are manifold, but AMP has experienced a range of problems including structural and cultural issues that can help illustrate the changes effecting the advice industry at large. Where this leaves tens of thousands of clients who were formally advised by AMP licensed and aligned advisers remain open to question.

The AMP brand has faced mounting challenges since the Hayne Royal Commission delivered its final report in February 2019. Concurrent with the rest of the industry, adviser numbers at AMP, Australia’s largest advice group, are continuing to fall across all of their aligned brands. The reasons are manifold, but AMP has experienced a range of problems including structural and cultural issues that can help illustrate the changes effecting the advice industry at large. Where this leaves tens of thousands of clients who were formally advised by AMP licensed and aligned advisers remain open to question.

The fee-for-no-service scandals which initially tarnished the company in the eyes of the public were followed by a radical restructuring of the company’s wealth division including BOLR changes that put AMP off-side with hundreds of their advisers. The adviser exodus that followed has continued, with the company facing class actions on a number of fronts. The most recent crisis, relating to AMP’s handling of sexual harassment allegations has seen the Chairman David Murray and another director resign, and again called into question the culture at AMP.

Adviser Numbers
The headline of a recent piece in Professional Planner titled ‘I don’t mention I’m from AMP’ was emblematic about how many current and former advisers feel about AMP. That article did also point to some positive feelings from advisers still with the group and mentioned that AMP still holds the largest number of advisers in the country. However, the numbers at AMP are approaching levels not seen on over a decade. 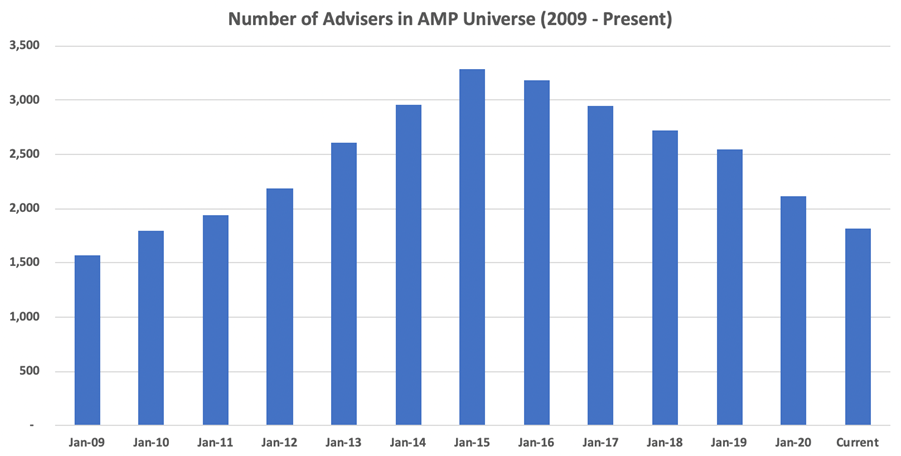 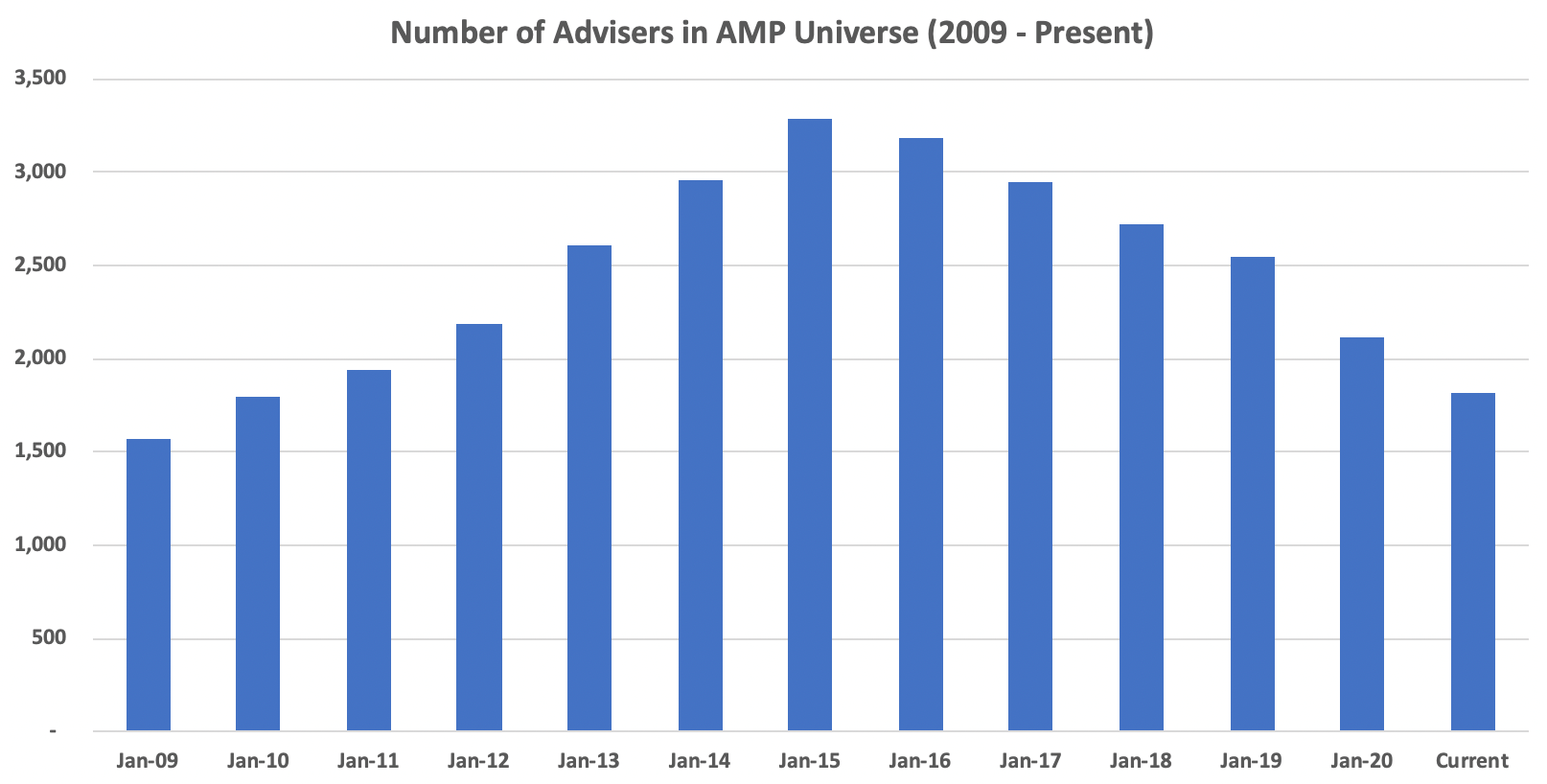 Our chart shows that from a high point of 3,286 advisers in January 2015, AMP adviser numbers have been reduced to a total of 1,814 at latest count, a decline of nearly 45%. The trends indicate that AMP may lose another 100-200 advisers before the end of the year.

When looking at the breakdown of current and former AMP aligned brands, our second chart mirrors that of the overall universe for AMP. Two licensee’s with formally hundreds of advisers, in Genesys and SMSF Advice, have disappeared in recent years, while all other licensee numbers are also trending down. IPAC securities has been re-branded as AMP Advice with advisers now being employed directly by AMP. 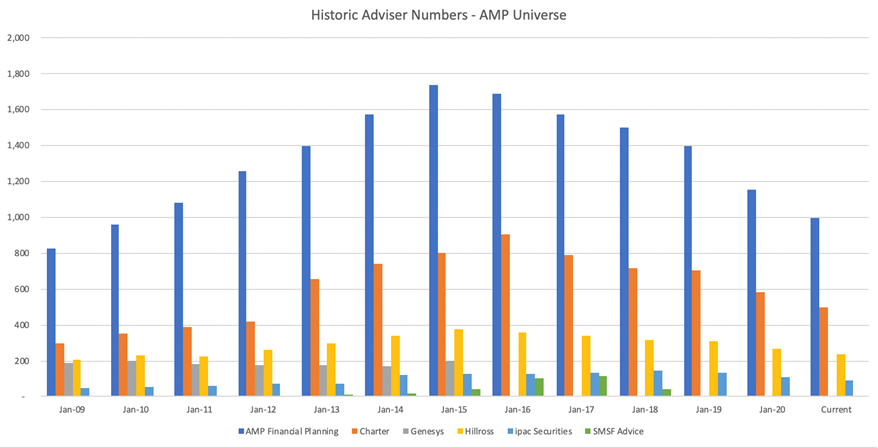 What will this mean for the clients of AMP advisers? It is understood that in many cases, contractual obligations mean that AMP retains ownership of the client once an adviser leaves the company. Based on research that contributed to our Landscape and Musical Chairs reports that indicated the average adviser across the industry had 138 clients (and understanding many AMP advisers would have had much larger books), the loss of around 730 advisers since January 2019 could easily equate to over 100,000 clients needing to be re-housed. This orphaning issue is one challenge that the industry must meet and find a viable solution for if we are to maintain and grow the reach of financial advice into the Australian community. We have more on the orphaning issue in our latest Musical Chairs report.

Heads Begin To Roll for AMP
It was back in April 2018 when the Royal Commission claimed its first big scalps after AMP’s chief executive, Craig Meller and Chair, Catherine Brenner announced they would be leaving their roles after the commission revealed that AMP had misled ASIC over 20 times regarding customers who were charged fee for services they were never provided. It also emerged that senior executives within AMP had repeatedly interfered with an “independent” report on the scandal by law firm Clayton Utz. At the time, then Treasurer, Scott Morrison responded by warning that AMP executives could face gaol time for their role in the scandal and senior counsel assisting the Royal Commission recommended criminal charges against AMP for breaching section 64 of the ASIC act.

Class Actions
A year later, after their share price had tumbled 70% and the company delivered a $2.3 billion net loss in the half year to June 30 (2019), AMP announced it would engage in a new strategy aimed at rationalising and repositioning the company’s outdated business model towards “new industry realities”. This included an aggressive restructuring plan which lowered the agreed guarantee to its aligned advisers to buy back their client registers from 4 times revenue to a maximum of 2.5 times under their Buyer Of Last Resort (BOLR) agreements. Last month AMP confirmed that a class action had finally been filed against it by advisers who were affected by this decision.

It is not the only class action that AMP is currently facing. Legal firm Maurice Blackburn is prosecuting allegations that AMP Trustees and AMP Group “contravened a number of statutory and/or general law obligations which resulted in AMP members being overcharged administration fees for an extended period of time”. Earlier this month another legal firm legal firm Piper Alderman announced it is preparing class actions against AMP, and other banks and dealer groups arising out of a failure by the institutions to properly engage with the changes designed to be implemented by the FoFA reforms.

Harassment Scandals
AMPs problems have continued with the resurfacing of sexual harassment allegations against Boe Pahari stemming from his interactions with a subordinate in 2017. AMP investigated the allegations at the time, which resulted in Mr Pahari being penalised $500,000. The issue blew up again following AMP's decision in July to promote Pahari to a new role as chief executive of AMP Capital, one of the company’s highest paid and most important positions. The decision garnered outrage from within AMP and led to an AFR investigation that revealed sexual harassment complaints against top executives. Chief Executive of AMP’s Australia division, Alex Wade left AMP amid allegations he had sent explicit photos to female colleagues. AMP's two largest individual shareholders, Harris Associates Allan Gray, signalled their unhappiness with the company's top managers and Mr Murray's board and the Australian Council of Superannuation Investors also said Mr Pahari's position was "untenable". The result was the resignation of Chair David Murray and board member John Fraser, and the demotion of Pahari.

The challenges faced by AMP are both unique and common in the wealth industry today. There is no doubt legislative and structural changes are forcing the hands of both the largest wealth player in Australia, and most smaller players. These issues will require much of the attention of the advice industry to deal with. But the cultural issues that have recently received attention at AMP are just as, if not more important. If the "behaviour" of some of our leading corporates had been better, arguably the industry would not be facing the tremendous regulatory environment that it currently does. These issues are not only confined to wealth and financial organisations, and are apparent, to a greater or lesser degree across much of corporate Australia. The tin ear that has been displayed by AMP in this particular matter and the resultant leadership carnage should be a warning to other large businesses across the country to pay more than lip service to their social and governance policies or face the consequences.

Then they can get back to the fundamental issues of dealing with structural change, and servicing their clients again.