Studies indicate the financial services industry has the largest payment gap between women and men of any industry in Australia (33.5%). Monday the 4th of September marks Equal Pay Day as promoted by the Federal Government Workplace Gender Equality Agency (WGEA). Read on to find out how your business can tackle gender inequality and encourage a more equal workplace environment for your staff.

A month or so ago we ran an article called Is Superannuation Biased Against Women. It got plenty of views and generated some interesting comments particularly in regards to the preposition in the title. Seeing as studies indicate the financial services industry has the largest payment gap between women and men of any industry in Australia (33.5%), we decided to follow up with you, the advice community to see what you might think about the issue of the Gender Pay Gap. We encourage you to leave a comment below if you have anything to say on the issue – even if you think it is a non-issue and have given it little though to this point.

Monday the 4th of September marks Equal Pay Day as promoted by the Federal Government's Workplace Gender Equality Agency (WGEA). September 4th was chosen because it marks the additional time from the end of the previous financial year that women must work to earn the same as men. This year that time amounts to around 5 weeks’ extra work on average (across all industries) that a woman must do to be paid the same amount as a man. 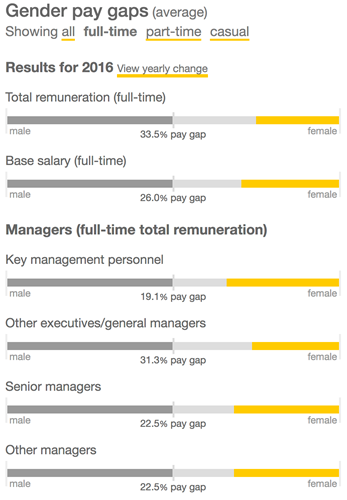 There are multiple issues contributing to the gross Gender Pay Gap including types of work done (full-time/part-time/casual), participation rates, time out of the workforce and our societies conscious and unconscious bias against paying women equally. The results are manifold and their corollary effects influence most aspects of our lives including superannuation, work/life balance and even how much time we get to spend with our children.

Annabel Spring, the head of wealth management at the CBA, recently told The Australian that “closing the gap between men’s and women’s pay, superannuation balances and workforce participation could generate an extra $460 billion in savings for the economy”. She said women needed to get better access to financial information and advice to build their financial capacity.

There is undoubtedly a role for financial advisers to help inform strategies for women (and men) who are changing the way they conduct their working lives. Women spending more time at work and an increasing number of men taking time out of work to become their children’s primary carer will become more commonplace in the future, and planners and their clients would do well to be cognisant of these changes.

Ms Spring also said Australia needed to turn the debate about achieving financial security for women from a “specialist gender research topic to a mainstream economic narrative”. And we agree. This shouldn’t be a topic specifically about gender, although framing the issue about gender is a great way to get attention – it also releases the bias against the well-formed social and business arguments promoting pay equity and the positive outcomes it can achieve.

Some people will ignore both the mountains of data showing it exists and the beneficial outcomes projected to result from closing the gender pay gap. These people will probably cry – “it’s all a load of PC garbage!”, because that seems the latest fad for people who refuse to entertain the idea that society changes and recognise that cultural norms are forever fluid.

If you are not one of these people, we encourage you to check out the WGEA’s highly informative site that is chock full of data and statistics, as well as case studies, toolkits and resources for both large and small businesses, showing how you can tackle gender inequality and encourage a more equal workplace environment for your staff. Your business stands to benefit if you do.

"The statistics do not paint a very good picture of womens pay in this country, however, as a small enterprise I do not believe I need to take too many steps for myself, as long as when I employ someone I remember to do so on their merits. Whether they are male or female should not come into the equation."