Despite the significant challenges, self-licensing continues to hold appeal for a large proportion of the adviser market. However, cost pressures and compliance risks often see AFSLs surrendered after a few years. Is it worth going down the self-licensing route? We look at the pros and cons.

The reputational crisis at the big end of town has driven many advisers to exit institutions in favour of privately-owned licensees.

In the past five years, the volume of advisers licensed by large entities has plummeted, as practising advisers either leave the industry altogether or move under the privately-owned model – either to bigger firms or boutiques.

In 2016, there were more than 14,000 advisers licensed in the diversified, industry super fund or not for profit, stockbroker or bank sector; now there are just over 7500.

While a significant proportion of those losses are due to industry departures, the number of advisers operating under privately-owned licensees has lifted from just over 10,000 to 11,500.

Despite the numerous challenges, the self-licensing model continues to hold appeal for a significant proportion of the market.

Adviser Ratings analysis shows that just under 20 per cent of practices are self-licensed.

Given the high volume of small licensees relative to the industry juggernauts, licensees with one practice now make up about 80 per cent of the market (1670 licensees in total). 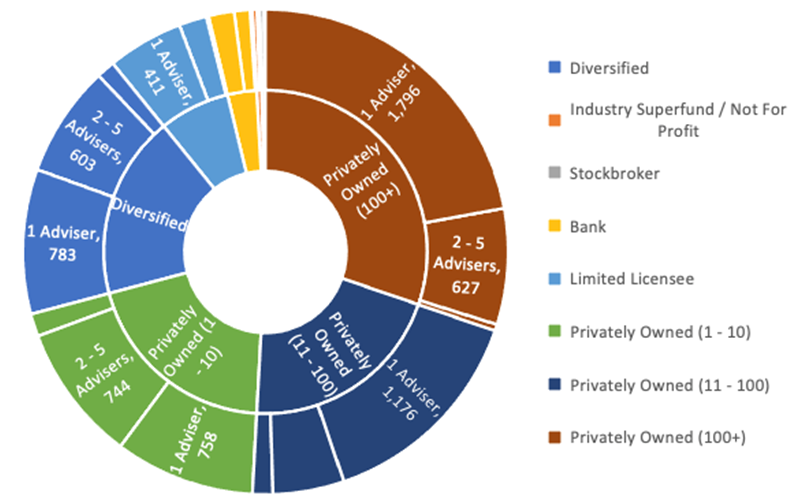 The pros and cons of self-licensing

As an adviser, operating under your own AFSL or joining a self-licensed boutique may tick a number of boxes. Here are a few of the major advantages:

- You are unshackled from your dealer group’s obligations and product list;
- You can dictate the direction of your business;
- You can market yourself as an independent entity, where the client’s best interests come first.

However, self-licensing also has a number of downsides. Some of the recurring ones are:

- You don’t have the resources or backing of a big licensee;
- You’re responsible for the initial and subsequent licensing costs;
- You take on all of the compliance obligations;
- PI insurance is costly and difficult to obtain.

Why going solo is so difficult

While there is still a strong appetite from advisers to go it alone, the reality of running a small, self-licensed practice means that many don’t make it beyond the five-year mark. Our analysis shows often AFSLs are relinquished in favour of larger, privately-owned options.

As the chart below shows, the past year has seen licensee discontinuations continue to outstrip new formations.

In the past, we’ve also reported the AFS register is also made up of hundreds of “zombies” – licences that are still listed on the AFS register but have been removed from the ASIC Financial Adviser Register. Many of these were created in the past few years.

Despite looking promising in theory, the licensee model has long been criticised for being economically untenable for many. On a smaller scale, running costs, coupled with PI insurance and compliance, make it difficult for many to stay afloat.

The second element working against self-licensed boutiques is the risk management. Balancing reporting obligations and general compliance with business growth is a difficult ask.

Despite this, there is still demand for self-licensing. Third-party providers are coming to the table with compliance and paraplanning solutions to free up a bit of time, but more change is needed to reduce the model’s cost burden.

"The three assessments that should determine whether you obtain your own AFSL or seek a License that offers what you're looking for... The Cost, The Time and The Risk. Here's a start on the cost. Circa the following: ONGOING AFSL ADMIN COST Cost of Compliance Updates $15,000 Compliance Audits $6,000 2 x AR AFSL ASIC Audit $10,000 License Audit (Independent for PI) $8,000 Revenue collection and Payment $5,000 Research $8,000 Training $2,000 ASIC Fees $2,000 AFCA Membership Fees $1,500 Maintenance of ASIC Register $1,000 Industry Association Membership $10,000 PI Insurance $20,000 2 x AR Cost of RM $36,000 ($1500 per day for 24 Days) RM Training $3,500 Legal Fees - Industry and Licensee Developments $5,000 Total fixed Costs Circa $133,000 No provision for: Client Compensation Ombudsman Conference Addition Legal Fees Investment into proprietry software The Cost is the least of the assessments. Practitioner Time and Business and Personal Risk are the big two. "

"I have been in the stock broking industry advising on shares from 1981 and running MDA products since 1997.. I acquired the MDA license from the Sydney futures exchange trading on real time basis for 2 years in 1998. This FASEA exam is an abominable product as 75% of the questions relate to Financial planers . Absolutely nothing to do with what I have studied and trained for. There should be 2 separate exams one for financial planners and one for stockbrokers and professional traders."

"Very interesting article; thanks. As someone who has held my own AFSL for 10 years, there is one factor you didn't cover. Tax. The new Liberal government imposed taxes being imposed on the industry is much more costly for those with their own AFSL. The Liberal ASIC tax was $5,200 for me; just me. This is because I had to pay the per adviser fee, as well as the flat fee for AFSL's offering life insurance and then also financial advice. In addition the Liberal government imposed Tax Practitioners Board tax (#TPBtax) costs sole-practitioner AFSL holders three times what it costs everyone else. One registration and fee for the adviser, for the trading business and for the entity holding the AFSL. Perhaps the Liberal government is deliberately trying to tax small people out of holding independent AFSL's. If so, this will just get worse. "

"PI costly and hard to come by? Truth is the couple of insurers that actually do this just quote the same for everyone. 12.50K per adviser or there abouts. This isn't that much more than paid within a huge licensee.. Not hard to figure out the rest"

"These articles are all well and good. But where are the articles showing how much it actually costs and what those costs are?"