Royal Commission – FPA And AFA Under The Pump

The royal commission today looked at the major financial advisory membership associations, the FPA and the AFA. The particular focus was about what role the organisations have with regard to policing adverse behaviour by their members and the extent that the public would benefit from their actions.

This morning’s proceedings at the royal commission focussed on the major financial advisory membership associations, the Financial Planning Association of Australia (FPA) and the Association of Financial Advisers (AFA). The heads of both organisations stumped up to the commission to answer questions about their place in the industry, in particular about what role their organisations have with regard to policing adverse behaviour by their members and the extent that the public would benefit from their actions.

First up was Dante De Gori, who was quizzed about the FPA’s handling of the complaint against one of its high profile members, Sam Henderson. The commission had previously detailed how one of Henderson’s staff had impersonated the client several times on telephone calls in order to obtain details about her super, then did not pass on advice that rolling over her super would have incurred a half a million dollar penalty.

After the client made a complaint to the FPA, Henderson began contacting it’s investigating officer, described the issue as a “storm in a teacup”, asked that the investigation be kept secret and later told De Gori that his “peers would be very interested in his organisations handling of the complaint”.

Asked why the FPA had not just imposed sanctions on Henderson, De Gori said the complaint resolution process needs “confirmation and agreement of terms” by the subject of the complaint. The complaint is yet to be resolved. It terms of the FPA’s potential actions regarding the complaint, De Gori said “expulsion” from the FPA is the most serious available action.

Council then pointed out that even on expulsion, an adviser is still free to ply their trade and pointed out several instances where sanctioned FPA members have had their identities kept secret and not displayed at the FPA’s website, despite a 2011 update to FPA regulations that made the publication of expelled advisors’ names standard practice. De Gori emphasised the FPA’s role in educating their members and working to “improve and change their conduct” and agreed that the FPA does not have the right to stop someone practising but said the threat of publication…is the strongest mechanism to ensure compliance.

Chief executive of the AFA, Philip Kerwin was next to front up. He says The primary function of the AFA is to promote the value of financial advice. Council pointed to a recent amendment to the AFA’s constitution to get the AFA on the way to becoming a co-regulator of the industry. In terms of regulation, Kerwin admitted that “There’s not a lot” the AFA could do for regulation that ASIC or a licensee couldn’t already do.

He was then asked about proposed conflicts in being a “regulator” of industry whilst at the same time it is competing with rival bodies for members? Kerwin replied saying he was looking through the lens of what is known of professional standards and that you can have multiple codes and bodies to monitor them.

It was revealed that the AFA has discussed with ASIC about receiving notifications of compliance concerns about its members but the regulator said they couldn’t for confidentiality reasons while investigations were ongoing, and that the AFA had just one formal agreement in place – with the CBA, which asks the licensee to notify them of suspensions or terminations of their members.

Kerwin also alluded to the prospect that suspension of its members then means the organisation has no further way of influencing the behaviour of that member saying “if you suspended the member they’re no longer an active member”.

What the commission exposed was the limited role the main member organisations have in terms of the actions they can take in dealing with their members who are subject to complaints or who are found guilty of misconduct. The role they play is important in promoting advice and offering assurances that their members abide by their respective codes of practice.

In a regulatory sense, the threat of expulsion from the organisations is the main “stick” they have to get their members to comply, the main “carrot” being that it’s members are able to leverage their membership in order articulate that they have voluntarily signed up to these organisations and comply with the publicised standards regarding professional and ethical behaviour.

Whilst expulsion from these organisations would carry a professional price, it would be greater if they were highly publicised. The fact that expulsion does not limit an adviser’s ability to practice, tempers the role that these member organisations can play in a strict regulatory function.

Further to our research regarding qualifications and their relationships to being banned or disqualified that we have previously published, Adviser Ratings has noted a moderate correlation that advisers who are members of an association with a code of ethics will behave more ethically than those who are not members. The correlation is stronger when membership to the accounting organisations is included in the membership body analysis and weaker when only the financial adviser membership associations are included. 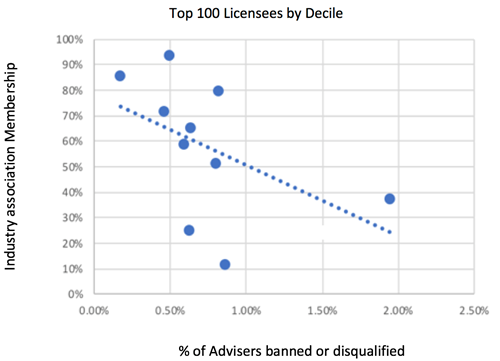 Source: Adviser Ratings 2018 Advice Landscape Report, Y Axis – Average % of members who are members of an recognized industry or professional association with a code of ethics (FPA, AFA, SMSF Assoc, CPA, CAANZ), X Axis – Proportion of advisers within licensee who have been banned or disqualified.

We note many advisers are members of multiple associations

"Why on earth are the professional associations charged with regulating the industry. Isn't that what ASIC, APRA, The Financial Ombudsman service and licencees are for???? do financial Planners seriously need another regulator??? These stories from the royal commission are just about individual misconduct, Porr advice relating to a technical topic or just flat out mistakes. As far as this royal commission goes it is just another witch hunt to burn financial advisors, nothing more. Why don't the professional bodies earn their money and stand up for the industry instead of cowering in the corner bowing to the government. The government is supposed to be the servant of the citizenry, not the other way around. Absolute garbage the whole thing. "

"So is it worth doing the CFP - or shall we just wait and comply with the new FASEA standards? I am starting to think the latter..... This whole RC has been very disappointing, I came into this 'profession' for the love of it (yes lower pay for me, no commissions) and to help people, now I feel like I have joined a crime syndicate"

"And we call ourselves a profession...."