Banks And Advice: The Continued Devolution Of The Industry

Banks once dominated the wealth space but have largely left the sector following the Hayne royal commission and associated regulatory risks. From the IOOF acquisition of NAB’s MLC to the Commonwealth Bank’s recent AIA deal, the moves away from financial advice have been decisive. We look at the changing landscape and the whispers banks will re-enter the space in new ways.

Australia’s largest banks were once the biggest players in the wealth scene, but the landscape has rapidly changed in the past few years.

The Hayne royal commission exposed a multitude of serious shortcomings from the Big Four and AMP, from vertical integration to fees for no advice.

The final royal commission report included a raft of recommendations to weed out wrongdoing, including the inclusion of annual fee reviews by the client, the repeal of grandfathered commissions, and tougher penalties for malfeasance.

Since the release of Hayne’s report two years ago, we’ve seen a significant withdrawal from the big banks from the advice scene.

In one of the biggest moves to date, the IOOF takeover of NAB-owned MLC saw more than 400 advisers move under an IOOF-owned license and a further 131 move to other licensees.

Analysis by Adviser Ratings shows a stark contrast in the wealth landscape over the past five years, with banks virtually unrepresented in the current market. 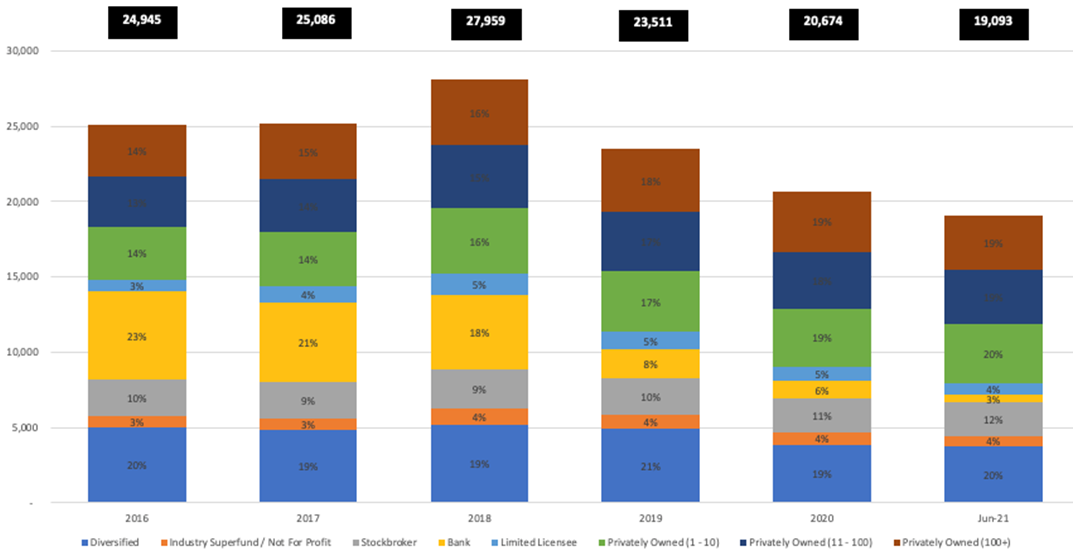 Similarly, the volume of bank licensees has fallen from 25 to seven between 2016 and 2021.

Over the same period, the number of privately-owned (1-10 advisers) licensees grew from 1,210 to 1,372. Every other type of licensee has contracted over the period.

It goes without saying that the banks’ retreat left funds under management (FUM) in freefall. Adviser Ratings analysis shows the banks’ FUM fell from $175bn in 2019 – the year of Hayne’s final report – to $40bn this year. Meanwhile, FUM per adviser for the segment fell from $91mn to $70mn over the same period.

Once again, banks FUM losses have been picked up by the privately-owned and diversified segments.

A return on the cards?

While we’re unlikely to see banks re-enter advice in their traditional capacity, pundits have speculated we’re likely to see a return from some of the Big Four – most likely performing new functions. Similarly, we may see the arrival of new international players to try and snatch a share of the multi-billion dollar retiree market.

One of the likely options is digital advice, but the major players are likely awaiting further regulatory certainty around the provision of piecemeal and digitally delivered advice.

Banks recognise the demand from clients and potential clients is now massively outstripping supply and an opportunity awaits. Watch this space.