What do we yield from the yield curve? If you're an avid reader of The Australian Financial Review, CNBC or really any mainstream financial publication, you would be well aware of the recent commentary about the inverted yield curve and its ability to ‘predict’ recessions. Indeed, every recession over the last 50 years has been preceded by an inversion in the yield curve. So why is this the case? Scott Shuttleworth explains...

What do we yield from the yield curve?

If you're an avid reader of The Australian Financial Review, CNBC or really any mainstream financial publication, you would be well aware of the recent commentary about the inverted yield curve and its ability to ‘predict’ recessions. Indeed, every recession over the last 50 years has been preceded by an inversion in the yield curve.

Given that equity prices will usually fall by about 40 per cent to 60 per cent during a recession, it's no surprise that an indicator with such a good track record has been studiously noted by investors.

For those unfamiliar with the yield curve, it's a rather simple concept. It simply presents the yield rates on US treasury bonds and bills for increasing lengths of duration (in years). As investors, we typically expect a higher return per annum if we commit to an investment for longer, and this is normally what the yield curve will show. Our first chart shows a normal Yield Curve with hypothetical data. 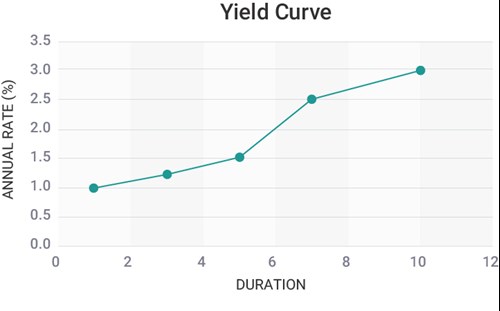 Occasionally however, the opposite is true, as in our second chart which shows an inverted Yield Curve with hypothetical data. 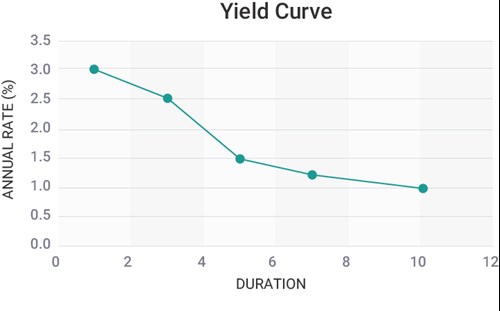 So why is this the case? In short, it's because investors believe that interest rates are going to fall in the future. As such, near term yields are unchanged but long-term yields fall and thus we see an inversion.

When short term rates exceed that of long-term rates, profitability is squeezed which disincentivises banks to lend, or when they do, it's under onerous conditions.

Because lending volumes are a key driver of consumption, this puts downside pressure on production in an economy (since what is consumed must be produced). Reduced economic production over a long enough timeframe is of course the literal definition of a recession. And hence why there is a link between an inverted yield curve and a recession.

As has been made abundantly clear in the popular press, the yield curve has inverted. So, what does this mean for advised portfolio's? If the yield curve is anything to go by, a recession is on the horizon. Clearly a recession could spell considerable downside risk for investments such as equities and other risk assets with positive beta exposure.

But whilst the yield curve has inverted, it's not clear yet that bank profitability has come under pressure. Indeed, as reported by S&P Global Ratings in July:

“Credit Conditions remain supportive for banks even if trade and geopolitical tensions are undermining confidence and economic momentum…..The Fed and ECB’s responses to counter the slowdown are positive for banks’ funding conditions.”

Hence before a recession can unfold, it appears that we'll need to wait for further news.

However, being complacent right now would likely be a mistake. There is often a lag between the inversion and the commence of the recession. Hence, with equity markets at all times highs and the cost of insurance being low, it's an opportune time to consider portfolio insurance to protect or even profit from large falls in equity markets. Indeed, at Vega Capital, we aim to utilise such instruments to generate high returns for our clients through recessions.

Waiting until the recession begins will likely result the price of insurance rising, mitigating its benefits and thus reducing portfolio returns.

Scott Shuttleworth is the Founder and Portfolio Manager at Vega Capital. He holds a Master's degree in Financial Mathematics from the University of New South Wales.

"How do interest rates at historic lows worldwide (something that has not been seen for 50 years - or ever for that matter) impact this yield curve predictor? Japan has had interest rates below 2% since the 1990's? Are the recessions talked about here only referring to the US because it looks at US treasury bond yields?"