Will a Royal Commission Help Consumers?

If you put stock in the banks’ own measures of customer satisfaction, a Royal Commission might be surplus to requirements. But stop people in the streets and odds-on, most will think a Royal Commission will uncover even more malfeasance in the financial services sector. A focus on cultural change in the industry might be far more attractive to consumers than the protracted and expensive showbiz of a Royal Commission...

If you put stock in the banks’ own measures of customer satisfaction, a Royal Commission might be  surplus to requirements. But stop people in the streets and odds-on, most will think a Royal Commission will uncover even more malfeasance in the financial services sector.

This conflict might be resolved by reframing the question and asking: "just what is it, beyond the sentiment the ‘banks are bastards’, which needs fixing?" I’d wager if there was a multiple choice answer, which included 'changing the culture' or 'changing some technical requirements', most people would opt for the former.

And given many commentators and experts seem to focus on, and blame ‘the culture’ in banking, it seems fair to ask if a Royal Commission is the best way to fix it. 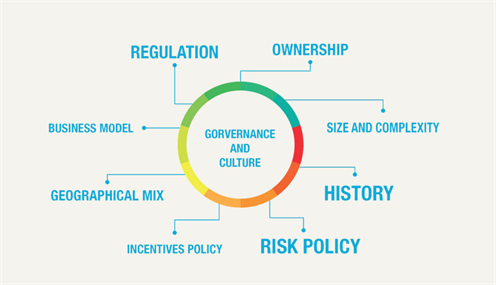 Graph from Worldfinancialreview: The diagram above presents a framework to explore the drivers of a bank’s culture, whilst retaining the important link with governance. Regulation is included here not in its capacity as rule setter, but as a potential influence on culture.

The people seem to trust former RBA chief Bernie Fraser (if the number of advertisements he fronts is any indication) and on Wednesday, on ABC Radio, he doubted the wisdom of any commission, given the time in years it would take to see any recommendations implemented, and given the existence of regulators such as ASIC, to drive change more quickly and efficiently. He said (as many would acknowledge) the problems are well-known and he sees it as the ‘maltreatment’ of customers due to a breakdown in governance.

Customers, he says, are rated a distant third to the interests of shareholders - and the management and the boards of the banks are either responsible or negligent. He argues a few independently-minded people (perhaps himself?) charged with working with the regulators and stakeholders could drive more change more quickly. Properly explained, this approach might be far more attractive to consumers than the protracted and expensive showbiz of a Royal Commission.

Yet the demands of party politics, and the interests of some in the media who delight in the conveyor-belt of news produced by such inquiries, might yet clamour louder.

"As somebody that worked inside the bowels of "The Millionaire's Factory" for so many years - Macquarie Bank - I can tell you now that clients are the last thing they think of. It is profit, greed, profit, greed, profit, greed. Everybody is focused on their annual bonuses and what little quirky products they can come up with to offload to the poor mum and dad investor, home buyer, whatever they are. They think they are superior and it is their arrogance that attracts supposed high net worth individuals. Like attracts like I guess, but at the end of the day, these clients don't realise they are actually getting screwed. My personal observations only."

"As someone who worked in banking for over 30 years the problems started when the banks went down the American path (Marty Cohen training) of sell, sell, sell and paying bonuses to staff who sold the most products or referred the most customers. Huge targets were put on the staff to conform and perform otherwise their jobs were under threat so what do you think they did? Sold at all costs, even though in a lot of cases it wasn't the correct or right thing for the customer..............."

"All this debating about "culture" is a convenient diversion for the banks as it is such a grey concept that the debate can go on for years, without anything changing!"