Where Will New Advisers Come From? - Part 2

Regular reports of declining numbers due to adviser’s cessation, along with very few numbers of new advisers entering the industry have led many to ask, “where will any new advisers come from”? With the new educational pathway and professional year requirements becoming established, we decided to take a look at how new advisers are coming into the industry, their experience with the new protocols involved and how they linked up with the firms they are now working at. In this, the second part of the report, we look at more adviser PY experiences, and hear from a business that is placing new advisers with firms.

Regular reports of declining numbers due to adviser’s cessation, along with very few numbers of new advisers entering the industry have led many to ask, “where will any new advisers come from”? With the new educational pathway and professional year requirements becoming established, we decided to take a look at how new advisers are coming into the industry, their experience with the new protocols involved and how they linked up with the firms they are now working at. In this, the second part of the report, we look at more adviser PY experiences, and hear from a business that is placing new advisers with firms.

Read Part One of this report.

Continuing our look at new advisers currently in their professional year (PY), we spoke to Harry Baker from Eureka Whittaker McNaught. Like other new starters, Harry began his career in an advice firm before to starting his professional year. He actually began his “approved” degree – a Bachelor of Commerce with a Financial Planning Major in 2015 at Griffith University, well prior to the new regulatory regime dictating the approved pathway. One year into his degree, a close friend working at Eureka Whittaker Macnaught brought him into the business, so Harry spent the next few years in different back office roles getting a “really good view of all aspects of the business” while completing his degree.

Sourcing clients as new advisers is obviously a major concern for those entering the industry. Harry had to show a fair degree of flexibility. After working as a client services officer (CSO) for an adviser in his base in Brisbane, he took the plunge and moved to Sydney to help take on one of the firm’s vacant client books. Following that, an opportunity came up back in Brisbane to become the adviser to the clients he already had a relationship with from his former position as a CSO, so Harry moved back again and is now settled and focussed on his advice role there.

At 25, Harry is younger than all of the other new advisers we have spoken to. One of the key issues facing younger advisers is the fact that anecdotally at least, many clients are somewhat circumspect when face with taking advice from someone less than half their age. A common refrain in the industry is that clients will be comfortable taking advice from someone up to 7 years younger or older than themselves. With the large number of experienced advisers departing from the industry, this facet of the advice process should not be ignored and strategies to deal with such realities with older clients facing new younger advisers should be explored.

A Different Path?
The new advisers we spoke to all had connections in the industry prior to engaging in their professional year. But what of those with no prior experience – how do newly qualified advisers get their foot in the door with an appropriate firm? One way this is possible is though engaging with a professional services firm such as Striver. The firm, previously known as Grad Mentor, has placed hundreds of students in the Financial Planning and Accounting professions since 2013.

We spoke with Striver’s founder Alisdair Barr, about the process of placing new graduates in financial firms. Alisdair said Striver are planning to place 120 students in the financial planning profession in the next 12 months, in roles including admin, client services and paraplanning. He was adamant that the transition for graduates into financial planning was not a linear process. “You’re not going to get new graduates, 21-22 year olds going straight into advice, it doesn’t happen…it’s not a straight line, it takes a few years after graduation to get to the stage where they are experienced enough to work as a financial planner”. 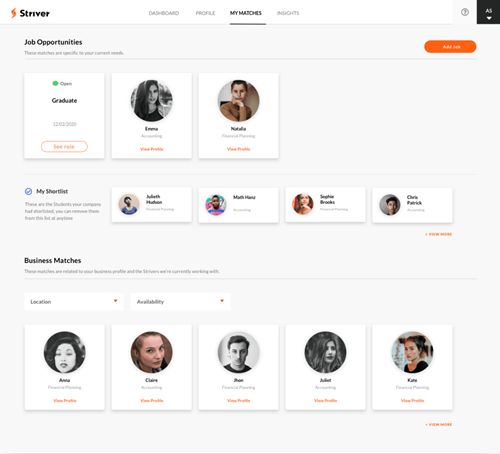 Barr said that it is free for students to join the Striver platform, and that firms pay a flat fee for a placement. Students go through a range of testing and filtering based on their university coursework and subjects. “We have 8 or 9 different filters that we put students through, the first 6 are done by technology, and we also do psychometric testing and sit-down eyeball to eyeball with them”. Advice firms can set up a profile with us, search by vocation, put up job descriptions, select candidates through filters (see image) – and the platform finds the most appropriate graduate. The whole process can take less than 2 weeks from the firm’s initiation, to placement.

Barr was aware that most firms wanting to grow their adviser numbers would “cannibalise their own” staff first, but that his platform offered a great pathway for firms and graduates to connect. “It’s as much about finding a business with the right culture for the students as it is for the business. Firms we deal with understand that hiring a new graduate is not a short-term process, so they need to make good choices on employment with regard to culture, suitability etc – we get technology to do the legwork and filter people to get it right".

Hard Numbers
A key obstacle in getting new advisers into the financial planning industry, particularly in the form of graduates was, according to Barr, the lack of awareness of financial advice as a potential career. “FASEA have said we have 900 people currently doing relevant degrees. That’s just 300 new grads per year and if this was the only pipeline, at that rate it would take 15 years to replace the advisers who have left the industry in the last 18 months”. About the graduate potential for the profession, Barr said we should be “singing about it from the rooftops” in terms of raising awareness of financial planning as a career path. On the state of the industry at the moment, Barr said he’s obviously aware of the massive ructions and disturbances in the industry in recent times, but that there is “lot of buoyancy” from his business clients at the moment. This is unsurprising as Stiver would generally only be dealing with firms who are looking to grow and would have a positive outlook for the future.

There is much still to play out in terms of professional pathways and entry into the advice industry for potential young advisers. It seems that so far, existing employment, or a key contact in a firm is a significant part of the entry process, though firms such as Striver are working to evolve that component. As time goes on it appears that a smoother transition into the industry will become more conceivable, and clearer pathways will develop. In terms of where the future of advice might lay, from this point it could be more auspicious and encouraging, than looking back over the industry’s recent past. It might be conceivable to say, “the only way is up”.

"I don't hate anyone enough to entice them into the abyss that financial planning has become."

"on my way out is correct . I just dumped a dr from one of the marvelous new GP CLINNICS Talk about wet behind the ears, he needed a bucket. The same will happen in the industry, It will become more electrified and personal contact will be lost.Surely these young people are capable of writing up a life policy or starting a Superfund for a young newly self employed tradesman That doesn't need a lot of work?'OH I FORGOT WE HAVE TO CONSIDER WHAT HE MIGHT WANT TO DO WHEN HE IS 50 SOMETHING.MIGHT GO OFF AND BECOME A BUDIST MONK? What is actually being implied is we dont want him the we only want the one's who survive the business world and are worth talking to. The industry is being decimated their will be a lot of people who will not be able to afford planning at any price. The people who got us to this point should be hung drawn and quartered for crimes against the population."

"Good luck to any graduates looking for a practice for their professional year. Most practices either don't have the time due to the post grad requirements, and how busy we all are with clients already. Let alone be willing too take on the indemnity Risk of a graduate who needs Financial Advice experience to fulfill their professional year requirements. I wouldn't be letting a graduate near a Financial Advice process with clients, until they have worked a year minimum as an admin. So after a 4 year degree, they are starting on Level 1 banking/finance/insurance award. That will be a surprise for them."

"The pathway is not as straight forward as many theorists predicted. What we have, is not exactly comforting. In fact it is alarming. There has not been much thought gone into the real impact of experienced advisers being forced from the Industry due to the explosion of unworkable and restrictive conditions placed upon them. Then to make it an obstacle course for Businesses to employ new entrants, seems to have caused the blindingly obvious result of thousands exiting and a handful entering the Industry. Leadership is lacking in Australia and what has taken it's place, is a world of compliance with little regard for the real world. The funnel has widened and more advisers will be gone unless there is an overhaul of the Regulatory maze and restriction of trade that is Australia today. It might sound simple, but simple is what Business owners need. Complexity leads to mistakes and today, a simple mistake can cost a lot."

"My friends, clients and I are in their 70's. Many have had management and professional careers. A common topic of conversation is the problem of finding a new doctor/dentist/other professional when their present person retires. There seems to be general agreement that you do NOT want a new/recent graduate without significant working/life experience. So I am sceptical of this article's claims of success from a "potted" course."

Thank you. You have successfully subscribed.