What Will You Expect From The Surviving Licensees?

Stressed licensees have lost hundreds of advisers in the past two years, as the shift to the privately-owned market continues. Given the increasing operational demands, advisers are expecting more from their licensee to justify their value. Licensees who cannot rise to the occasion risk losing more advisers as the market contracts.

Licensees have been under pressure to evolve for several years, with advisers increasingly voting with their feet if their AFSL doesn’t offer the right support or match their values.

The stress on licensees has seen hundreds fold over the past couple of years, with declines in almost every segment of the market, our analysis shows.

However, the most noticeable trend has been in the bank sector, which has made a swift exit from advice following the royal commission and the scandals that pre-empted it. The already small number of bank licensees has fallen 59 per cent in two years as banks made their exit from advice. Advisers licensed by banks fell from 3900 in January 2019 to 575 in July 2021. Bank-licensed advisers now make up just three per cent of the adviser universe.

Banks’ losses have been private licensees’ gains, as the post-royal commission demand for autonomy drove a decisive shift towards the private licensing model. The mid-sized privately-owned licensee has bucked the general trend with 11 per cent growth in the past two years, but private licensees of all sizes have gained advisers. In fact, large, private licensees now oversee almost a fifth (19 per cent) of the adviser universe. 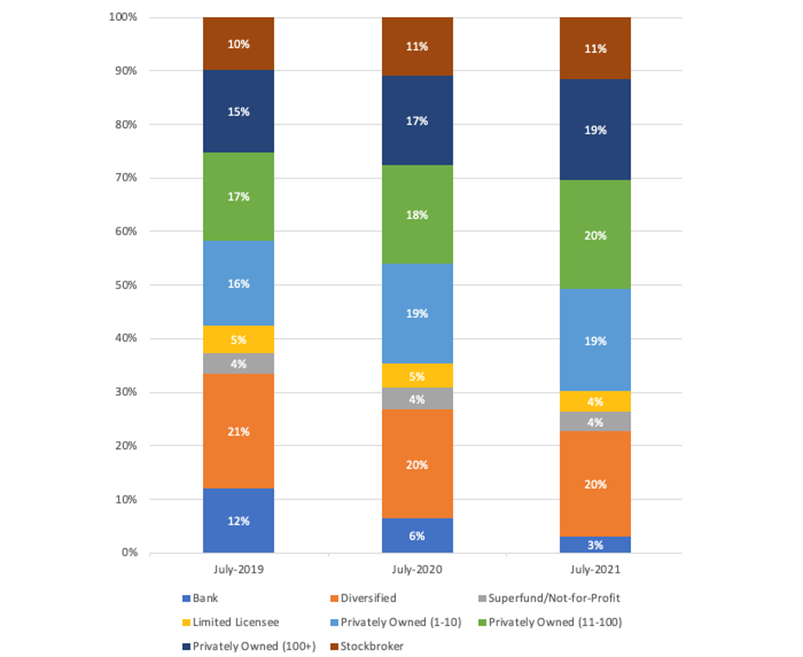 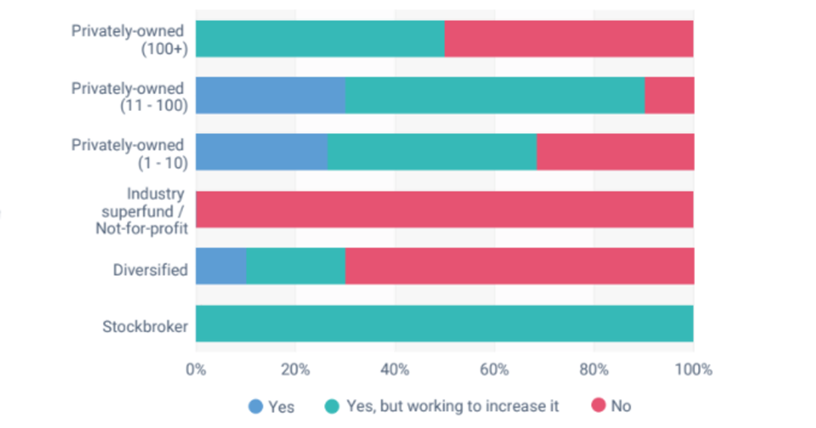 With institutional licensees in rapid decline, the government’s plan to introduce a new regulatory framework has prompted renewed questions about the future role of licensees beyond the APL and insurance.

Our research shows most licensees offer PI insurance and regulatory liaisons, but around half offer business growth support or paraplanning. Support around growth and profitability are becoming desired add-on services.

Advisers also tell us they were looking to licensees to foster collaboration and community within the emerging profession before COVID, but such efforts have been hamstrung by a series of lockdowns across all states and territories.

Given advisers are showing little hesitation about moving licensees in a shrinking market, the onus will be on licensees to prove their new value proposition to advisers – or risk losing them.

"Over a decade ago I wrote an essay, "Power and Profit" and declared FOFA was not about better advice but rather ensuring fund managers would make more profit by paying less in fees and the Industry Super Funds would get more control of FUM and use that power to leverage corporations. What have we witnessed? I advise clients as to the benefit of using a Platform for example, and that entity gets my labour for free. The recent change to ensure one super account follows a member is good, but Industry Funds still have the advantage and we have seen them wielding their economic power over the boards of the companies they invest in. The cost of providing advice and earning a margin worth working for has sky-rocketed so we can no longer serve the public good, but rather the economically elite. Who cares? Not our policy makers, that is for sure. "

"Like an FDS or OSA requires an Adviser to look back and forward confirming to Clients the Services to be delivered and what has been delivered licensees should be held accountable to their Advisers. They are a Service Provider but can’t confirm to an Adviser what value the add related to the Fees they charge. It’s a lot like Fee for some Service but at what Cost. "

"The trend to advisers getting their own AFSL is about to be reversed due to the Josh Frydenberg's love of red-tape and taxation of small business. Examples include the new ASIC tax which imposes a flat fee on AFSL's, and hence benefits larger AFSL's over small ones, and the latest news that ASIC is making AFSL's have similar financial reporting obligations as publicly listed company. "