This week ASIC released an update on compensation for financial advice related misconduct for six of Australia's largest banking and financial services institutions. Although the amount paid or offered to clients is nearly $750 million, the remediation still has a long way to go, with the current payments being just a fraction of the ultimate estimated cost to be borne. What will happen when smaller firms are targeted?

This week ASIC released an update on compensation for financial advice related misconduct for six of Australia's largest banking and financial services institutions. Although the amount paid or offered to clients is nearly $750 million, the remediation still has a long way to go, with the current payments being just a fraction of the ultimate estimated cost to be borne. What will happen when smaller firms are targeted?

Most remediation so far is for Fee-for-no service (FFNS) at $607.85 million, and another $141.87 million is for non-compliant advice, according the corporate watchdog’s data. These figures amount to the compensation payments made or offered by the institutions as at 31 December 2019 and include Macquarie, but not IOOF – who will continue customer review and remediation for non-compliant advice in relation to the ANZ Aligned Dealer Groups they purchased using the same independently assured framework implemented by ANZ.

The big institutions are all at various stages of implementing their remediation, and the total estimated liabilities continue to rise as more work is done. According to estimations by Shaw & Partners toward the end of last year, the total cost of remediation provisioned for by the four banks and AMP / IOOF is approaching $10.6b. 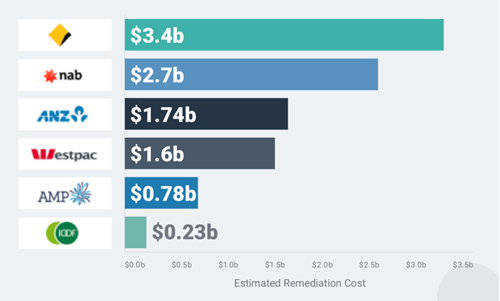 This includes the cost of determining the extent of the problem as well as customer compensation. The total bill for the industry may be substantially greater as original estimates have been easily surpassed, and when ASIC turns its attention to other institutions and the larger privately-owned licensees.

To conduct this exercise the banks, AMP and IOOF are looking at all advisers who are current or were previously authorised representatives at any stage over this period, as well as practice principals who were in charge at the time and who may have access to the same files that the firms are attempting to secure from the advisers. These past advisers and practice principals are in various stages of transition: still practicing (somewhere else); in new careers and industries; retired; or deceased, highlighting the challenge of getting back in touch with them.

In each institution there are many hundreds of people each making contact with the advisers and in turn sampling SOAs from their client base. If certain key reporting indicators are triggered the sampling could move from 20-30 clients per adviser into the vast majority or all of the adviser’s client base. This is exposing the difficulties of retrieving files (often paper- based) from the past. This exercise is continuing and there are also indications many larger, privately owned licensees are also receiving these notices from ASIC. This issue has added to the overall pressure felt in the market. Many practices report feeling squeezed on costs and overwhelmed by compliance request and requirements.

The internal teams assembled for this remediation work are reaching breathtaking proportions. It is not unusual to see teams of well over 500 internal compliance professionals, contractors, paraplanners, ex-advisers and major accounting firms. 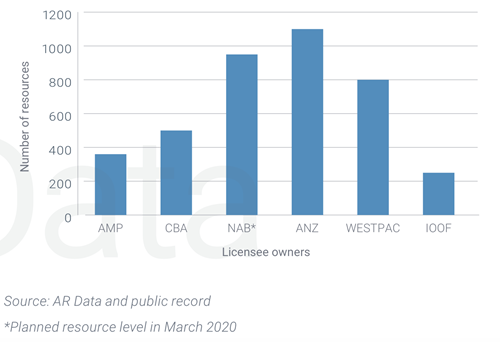 It’s a huge drain on risk and compliance talent and it is driving substantial demand for retired advisers and younger paraplanner resources as expert eyeballs to review SOAs. This is contributing to a spurt in recruiting costs and upward pressure on salaries, for junior staff in particular.

Conversations with advisers have revealed more negative externalities that have surfaced with this process. Several advisers we’ve spoken to have lamented that the additional review and compliance work associated with this process is being carried out by junior and/or inexperienced staff who are making the entire process more complex and ungainly. One adviser noted that it was like some of those charged with reviewing advice seemed to be running through a checklist and flagging many issues that were not warranted, potentially because they did not have the experience or skill to correctly read an SOA document. Advisers are thus burdened with providing much more accompanying material than they need as a result of this situation, adding to the cost and angst of the entire process.

The large institutions have the resources to be able to undertake this process (CBA has just delivered a first-half cash profit of $4.47 billion) but when ASIC start coming for the smaller end of town, the review process, let alone any potential remuneration may be a cost many smaller firms may struggle to meet.

"I love it how all these advisers on forums blame everything on the big 4. Ive worked for two IFA's and they were far less compliant than my experience over the past few years with a big 4. Blatantly ripping people off with ASF of 1.1% and hadnt talked to the clients for years, getting opt ins signed by the accountant completing the clients tax return, hidden in the pack of documents. thankfully ive moved on to a new profession, FP wont survive this."

"Not sure about: "The internal teams assembled for this remediation work are reaching breathtaking proportions. It is not unusual to see teams of well over 500 internal compliance professionals, contractors, paraplanners, ex-advisers and major accounting firms". AMP have enslaved via blackmail their own Advisers to undertake this work with no recognition of the associated cost to do their own Audits. Not to mention the remediation they will then claw back from the same adviser."

"This situation is a taint on Government and Society After sitting in the living rooms of many clients and explaining to them what's going on with our profession makes me feel sick. To say that what is happening is to the good of the consumer is ludicrous at best. The Governments who have made these decisions should be truly ashamed and If anyone ever thought it was easy to become the custodian of a families Financial well being then go try it out it might surprise you just how hard it is. This Country should be truly ashamed of what is happening to a great profession trying to help everyday Australians. RIP Financial Planning Profession"

"The whole situation is one big nightmare. It's interesting that the big companies that caused all the problems, have now left the industry by selling their wealth business or spinning them off and so, as usual, the small business adviser that values the relationships they build with their clients and actually services them, are burdened by the ridiculousness of the extra/new compliance based on failures that happened by companies no longer operating and from years ago. "

"The Big instos have the deep pockets to pay for their sins but the stench they have left on the industry will ultimately be paid for by other. Firstly by advisers who will be forced out due to having to comply with regulations designed to counter what the instos were doing. How ironic they're all getting out already. The second group to pay will be the Australians who can't afford advice. Congratulations to all concerned."