The Elephant and the Gathering Software Herd

In terms of new players, the promise of Advice Intelligence, CCUBE and Intelliflo has not materialised to date. Disappointingly, after a reported $20m investment, CCUBE was sold and re-emerged in parts under OpenMarkets, while the other two remain works-in-progress and continue to push back their launch plans.

It wouldn’t be a conversation about financial advice software without referencing XPLAN’s domination and the challengers and pretenders. Market share hasn’t materially changed, although with major banks exiting advice and the ongoing fragmentation of the adviser market into a largely micro-business community, this is challenging XPLAN’s service and pricing model to “go small”.

In terms of new players, the promise of Advice Intelligence, CCUBE and Intelliflo has not materialised to date. Disappointingly, after a reported $20m investment, CCUBE was sold and re-emerged in parts under OpenMarkets, while the other two remain works-in-progress and continue to push back their launch plans.

The early league table of software NPS scores paints a familiar picture to last year, as judged by advisers in our current 2020 Financial Advice Landscape benchmarking study. The original giants in XPLAN and COIN are scoring poorly so far, while some new and established players are well regarded.

This year we have extended our definition of financial planning software to include a broader range of offerings, including the SMSF family (BGL, Class), Roar Software and Astute Wheel, as well as two choices previously only available internally within the owner-licensee (namely Fiducian FORCe and Infocus PlatformPlus) that are now being sold externally. Most of these new additions do not currently appear in our preliminary league table because they have not yet received sufficient votes from advisers to be statistically significant, although some are scoring very positively behind the scenes. 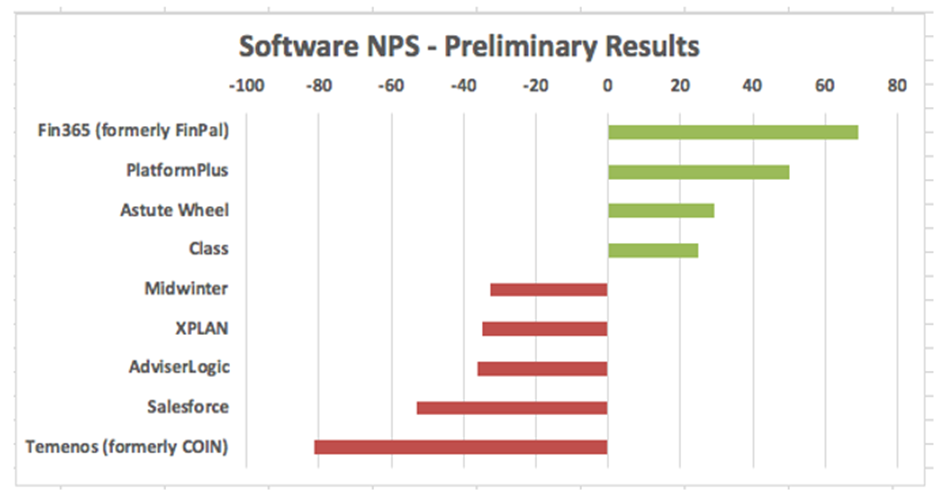 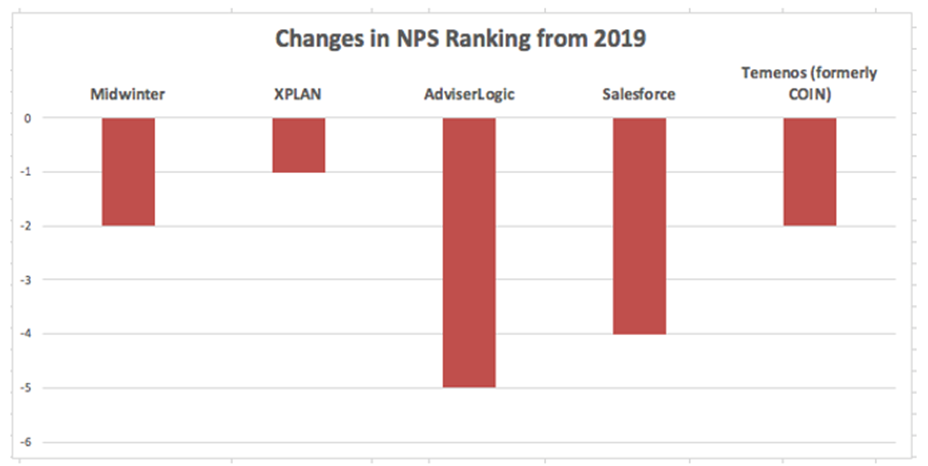 In reviewing adviser qualitative comments, some interesting perspectives are emerging:

Corporate actions
The purchases of Adviser Logic by Morningstar and Midwinter by Bravura have not yet translated into improved scores, rather the opposite, with both firms dropping down the rankings. It could be that the promises made by their acquirers were over-egged and have not met expectations, or that advisers are overly ambitions about the speed at which these firms can execute the technical and service improvements they no doubt have in train. The well-publicised wind-down by Temenos of the COIN software continues, with limited support noted by advisers.

Best Interest Duty (BID) Execution
The increased attention to BID by advisers means that they are holding software providers to even higher standards to get their data feeds, research and ratings right. There were many comments from frustrated advisers that expressed concerns in the legitimacy and reliability of the comparative analyses performed for clients, not just in terms of product comparisons but also for cashflow modelling scenarios.

Founder Pedigree
Advisers are tending to make a correlation between the quality of the software experience and the pedigree of the software founders. Infocus and Fin365 both were both roundly applauded for these reasons, but also because they were highly responsive to making software changes based on feedback from advisers.

The Elephant In The Room
It’s tough being a very dominant player like XPLAN in terms of market share - there is generally only downside to your market position, and everyone is having a go. The comprehensiveness and complexity of XPLAN has always been its strength when dealing with the larger organisations, but for the micro end of the advice industry, this translates into higher third party implementation, configuration and training costs that in many cases are beyond the pale. The challenge for XPLAN, and this also came through in surprisingly negative feedback on Salesforce (after a great arrival in our 2019 survey), is to find ways to chunk-down the service offering, or make the availability of individual modules more easily accessible while also streamlining the connectivity with other applications. More easily said than done, no doubt.

If you have some strong views on how software providers are adjusting to support your business, please have your say at www.adviserratings.com.au/yoursay and be in the running to win from a $30,000 prize draw.

"Are we the only business that still uses COIN? Everywhere I turn it seems someone is writing that it is being shut down, yet their support desk is still fully operational. I had high hopes for CCUBE and Advice Intelligence but when we looked at them they both seemed like an undercooked cake - they look great from the outside but when you cut into the middle they aren't ready yet. I guess we'll keep dancing until COIN turn the lights out......."