On 6 August, the next round of the Banking Royal Commissions will focus on Super Funds. Some of the focus will be on life insurance within Super (Group Life). Echoing the significant change occurring in finance in general, the life insurance sector is undergoing massive changes in terms of ownership of significant players as well as the potential for regulatory change.

On 6 August, the next round of the Banking Royal Commissions will focus on Super Funds. Some of the focus will be on life insurance within Super (Group Life). Echoing the significant change occurring in finance in general, the life insurance sector is undergoing massive changes in terms of ownership of significant players as well as the potential for regulatory change regarding the governments push for an “opt-in” policy for group life. Changes to this particular policy will have an impact on both the life insurers and the super funds.

The makeup of the life insurance industry has undergone significant change in the last few years. Foreign investment into the industry has seen 80% of MLC Life sold to Nippon Life, Zurich acquiring OnePath in 2017 after buying Macquarie Life in 2016, MS&AD acquiring a minority stake in Challenger Life in 2017 and AMP entering into a reinsurance deal with Munich Re to quota share 50% of $750m annual premium income.

There has been concern for some time regarding the erosion of super due to “unnecessary” or “surplus” insurance cover. The Insurance in Superannuation Working Group (ISWG), which is backed by both industry and retail funds, found that an overload of insurance within super risks a "rapid erosion" of some retirement nest eggs. The group’s chairman, Jim Minto said that while insurance within super is valuable for some, younger Australians in particular are paying for insurance they do not need and often cannot afford. "It's great that it's there, but younger people in society have more than one superannuation account and so you can have life insurance in each account when you don't need that much life insurance," Mr Minto said.

The key for the industry is to balance the need for retirement savings with default benefits such as life insurance and income protection insurance.

The government could potentially make life insurance cover “opt-in” for those under 25, or those with super balances below a minimum threshold (say $6000). As a strategy, this part of the answer to the problem of erosion of super balances has come under fire from both industry and consumer groups.

Australia’s largest super fund, AustralianSuper said that while acknowledging the issue (erosion of super) and supporting appropriate initiatives, they believed there was “a better way to overcome the issue without denying cover or forcing gaps in cover for the majority of members." The fund, which last year itself made life insurance voluntary for all members under the age of 25, said a  "simple addition to this would be for the ATO to instruct all the funds except one to instigate a cessation of cover process, either immediately or after a suitable warning to the member".

Consumer group Choice said that there are "more targeted ways to meet the policy objective of ensuring people paid low wages are not over-insured".

Changes to the regulatory environment will have a proportionate effect on group life insurers. AIA and TAL are the largest group life insurers in the country. These two insurers are partnered with various superfunds whose membership extends to almost 10 million Australians. In the retail life space, these two super funds are very highly regarded by advisers, with a NPS of 24 and 23 respectively. We see a doubling down in efforts through this channel to make up a potential shortfall of Group Life premium income. A potential win for advisers on the service front as this battleground plays out.

Obviously, any new government policy will no doubt result in insurers and superfunds entering into a negotiation period, amending their agreements and re-pricing them. Re-setting the terms may result in premium rises if the insurers feel the changes increase the cost.

These agreements used to be multi-year in term, but increasingly, neither insurers nor superfunds want to be caught holding the baby in an environment where there is increasing reporting of mental health concerns and an increasing flexibility in the workplace. In terms of Life policies, both of these developments are fairly new and the product, performance and pricing of these policies is likely to continue to evolve.

Outside of the group life sector, foreign players in the space will no doubt be keenly aware of this and will be looking at all possibilities to firm up their investment, including exploring digital implementation, and this may have a significant impact on who advisers prefer to use in this new market.

The next phase of the Royal Commission, Superannuation and the Group Life sector, will be a fascinating one for advisers (perhaps temporarily taking the heat off). Industry funds will be in the spotlight – in recent years they have encroached on adviser’s APLs and they will be looking even more to shore up support in this sector. 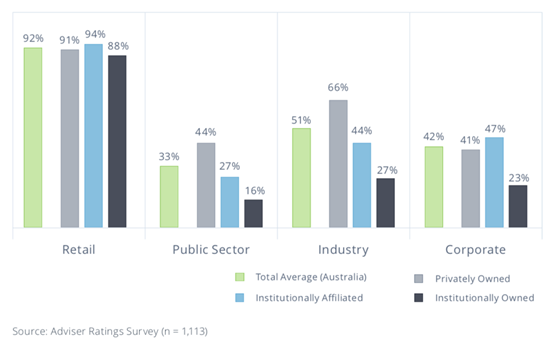 In the meantime, as the insurance market consolidates, all the players are spending significant sums on insuretech, re-evaluating their propositions in both group and retail life (especially in light of LIF reforms) and battling for the ever dwindling risk adviser – the race is on for the adviser market. 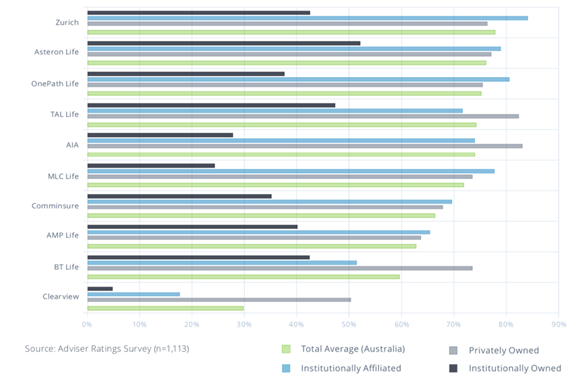 Adviser Ratings’ 2018 Advice Landscape Report explores these themes in detail across the top licensees and 59 regions in Australia. To purchase a copy of the report, please contact CEO Of Wealth, Mark Hoven at mark@adviserratings.com.au.

"I would like to know how a significant proportion of industry, corporate and retail funds rarely, if at all, pass on the annual tax credits from investments to their members."

"The suggestions made by Choice and AustSuper seem reasonable enough. If the government wants to address this problem, why don't they do it properly instead of making another problem with a half-arsed solution? Chronic under insurance should be able to be solved at least in part by a super system that is the envy of the world. If people aren't covered by insurance - who picks up the tab when things go South. Either the Govt or no-one, the latter which can leave people desperate and impoverished and which should never happen in a wealthy country like Australia."

"Superfund execs are paid extraordinary amounts for businesses that claim to be not for profit. many other things should be in the spotlight as well."

"Hopefully it will be more than just group life on the radar as far as industry funds are concerned. It will be a great opportunity to make public the corrupt (or should I say conflicted) arrangements between them and the unions."