Social Media Use in Australia

It doesn’t matter whether you’re taking a commute in a big city or at lunch in a small town. You’ll have noticed that everyone’s got their eyes glued to a screen of some sort, and chances are they’re on social media. You know it’s ubiquitous, but you still might be surprised by some of the stats around Australian’s using the internet and social media...

You may be surprised that Australia has one of the highest rates of Internet and social media usage in the world*. But then again, if you look around at people on trains, busses or even waiting in queues in the bank, you’ll notice that there will be a fair percentage of people looking at something on their phone.

Australia has a population of just over 24 million people. We can count 21.2 million of those (or 88% of the population) as active internet users. Despite derision for social media in some quarters (former PM Tony Abbott casually dismissed it as electronic graffiti), 14 million people or nearly 60% of the total population, were users of Social Media.

A summary of Australians online

It might be hard to fathom, but the iPhone, one of the first phones to feature the multi touch display that has become the norm today was introduced under ten years ago, in 2007. In less than a decade, smartphones have become so common now that there are more mobile connections in Australia than there are people and over 13 million people are active users of social media on their mobiles.

Frequency of internet use

Nearly 80% of us access the internet at least once a day and a whopping 69% of the adult population use some form of social media. Facebook has far and away the largest share in the social media space with more than 9 in every 10 social media users accessing it. This is followed by the professional networking site Linkedin (28%), photo-sharing site Instagram (26%) and even Twitter claims nearly one in five social media users. 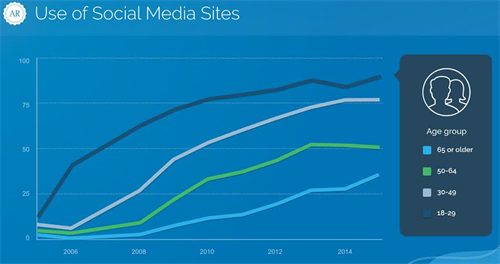 One of the most interesting aspects of our use of of Social Media can be seen when we look at it's use among different age cohorts. Not surprisingly, among the younger generations, Social Media engagement is at it's heaviest. As our chart shows more than half of those aged between 50-64 and nearly 40% of those aged over 65 use Social Media. In fact - the very latest data (not included in the chart) indicates that it's use for people aged 50-64 has actually increased to 63%.

These stats are not being lost on wealth industry professionals. Data from the US indicated that 40% of all investors surveyed said they use social media as a key investment information source. The ease of communication that Social Media offers is having implications on adviser-client relationships that works both ways - advisers reaching out to potential clients and clients researching advisers.

A recent study in the US indicated over 80% of advisers are using Social Media for their business in an effort to engage potential clients in a non-traditional manner with over half reporting they have used Social Media successfully to convert a prospect into a client. Another study by Linkedin and the US FPA showed that for those in the 18-44 age bracket, more than half did an online search of advisers before making contact and 10% even searched out the advisers social profiles after meeting them, but before they made the decision to engage their services or not.

Given that most social media sites are less than 10 years old, these engagement statistics described above are actually quite stunning. In a very short periond of time, social media has, and will continue to fundamentally change the way people communicate and build relationships.

For older consumers, particularly those who are yet to engage with Social Media, it may be hard to fathom exactly what benefits arise from its use. But as the years tick over we can see more and more people, especially in the older demographics trying out things like Facebook and instagram and appreciating the connectivity it offers. This connectivity initially might mean being notified of a friends wedding or a party. However as the technology matures, further normalisation of this behaviour will mean it filters into other areas of peoples lives, including communicating with professionals outside of the "traditional Social" sphere.

Both consumers and advisers would be wise to recognise this trend and certainly should not write Social Media off as some kind of electronic graffiti!

"I think it is inevitable that increasing numbers of people will be communication via different social media platforms in the future. Facebook is here to stay. Other specialist platforms may come along. Smartphone and similar technologies encouraging further penetration of the internet into our everyday lives will mean that these types of communications and connections will only increase, whether it is purely social, b2c, c2b, b2b or c2c. In the not too distant future, from a business point of view I believe if your not connected, you will not last."

"As an adviser I think if you're having to resort to SM to get clients you're doing something wrong. Facebook and Twitter in particular are both full of numbskulls and narcissists who have nothing better to do with their time than look at and listen to themselves with a smug know everything attitude. I think Abbott was correct!"

"I can't believe that so many of people use Google+ it's rubbish!"