Adviser Rating Latest Data analysis indicates that the last year has seen the creation of 336 new licensee entities. During the same period, 118 licensees have been discontinued, affecting over 2,000 advisers. Of these advisers only 36% have been re-licensed meaning nearly two thirds of these advisers are yet to find a new home...

Adviser Rating Latest Data analysis indicates that the last year has seen the creation of 336 new licensee entities. During the same period, 118 licensees have been discontinued, affecting over 2,000 advisers. Of these advisers only 36% have been re-licensed meaning nearly two thirds of these advisers are yet to find a new home – or have potentially exited the industry for good. For all advisers from ceased licensees who have found new homes, 87% have gone to “privately owned” licensees that are not institutionally owned or affiliated.

Figure 1 shows the monthly numbers of new and ceased licensees over the last 13 months, to April 2019. On average, there have been 26 new licensees created per month, while an average of 9 licensees have been discontinued. 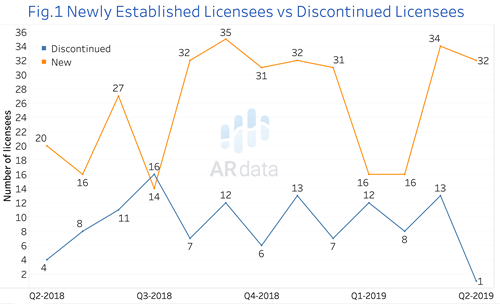 The 118 discontinued licensees represented a total of 2,172 advisers – around 10% of the total active advice community. Nearly two-thirds of these advisers are yet to be re-licensed. Of the 2,172 advisers effected, 1,392 are still not advising, inviting speculation that many of these advisers have left the industry for good. Adviser Ratings has been keeping longitudinal data on these and other adviser movements in the industry so we can analyse and better inform the industry of these movement trends. This will also enable the industry to critically evaluate the outcomes of sometimes contentious legislative and policy amendments such as FASEA educational requirements and commission withdrawals.

Our current data indicates that the median time period for an adviser to be unlicensed prior to getting back in the industry is just 37 days.

Only 36% - or 780 advisers who were licensed by now ceased licensees have found new homes. 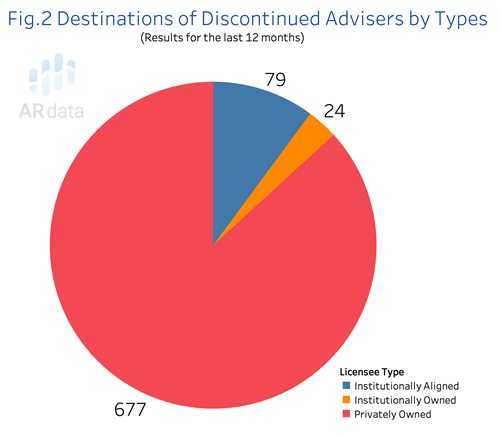 Figure 2 indicates that 677, or 87% of advisers from ceased licensees are now licensed by the privates. This and the fact there has been 336 new licensees created (none of whom are affiliated or owned by institutions) is further evidence of the further fragmentation in the financial advice landscape.

There are many conclusions to draw from this information, including the flight of advisers from the industry. Another interesting inference is that this data indicates a real challenge facing the ever more vigilent regulators. Considering the new “enforcment appetite” signalled by APRA and ASIC and the extra funding received by both to ensure compliance, this continued fragmentation will only make policing of the compliance regime more challenging and resounce intensive.

"I dont see this figure being so relevant. the big exodus is rolling. each long term contact ive spoken to recently has given notice to exit and thus a great many experienced advisers leaving and will not go back in. sadly i see this as a very poor outcome and RC will be highly critised in the future. Its not longer feasable to serve younger people or Mr average if a loading comes back on a underwriting assessment then a new SOA again! Yeah right, who pays for this? Bye, turning lights out that shone over 30 years."

"Lots of guys joining me at Boston Reed from Evermore Money. Learnt a few tricks from Peter Daly and his mates at Beacon too. Bonza. "

"Very interesting numbers, thank you. Could you perhaps advise how you generated those numbers? Are these numbers definite or could they vary substantially? Very interesting that of those forced to find a new licensee 87% go to privately owned ones. I wonder if that is an accurate reflection of sentiment? I have trouble with the 64% number for those who haven't found a new home? I am not aware of some 1,374 advisers making fire sales of their books. That would be noticeable. Is it because there are a large number of dormant advisers? I don't think so as it costs too much for an adviser to be licensed. "

"Lots of exiting adviser - lots of new licensees - lots of headaches for ASIC - lots of dust still to settle."