Subject to how many MLC advisers ultimately commit, IOOF will house the largest adviser network in the country with almost 1,900 advisers, overtaking the once dominant AMP. While much of the media attention has been on the advice metrics, IOOF will also become the largest retail wealth manager by Platform FUAdmin with nearly $200 Billion, or more than 25% of the platform market. With technology being a cornerstone of IOOF proposition for advisers, how do the combined IOOF and MLC platforms stack up?

IOOF’s takeover of MLC expresses two fundamental trends currently transpiring in the financial advice industry. The first is the continuation of the big banks extracting themselves from the wealth industry. The second is the consolidation at the top end of the licensee market. Subject to how many MLC advisers ultimately commit, IOOF will house the largest adviser network in the country with almost 1,900 advisers, overtaking the once dominant AMP. While much of the media attention has been on the advice metrics, IOOF will also become the largest retail wealth manager by Platform FUAdmin with nearly $200 Billion, or more than 25% of the platform market. With technology being a cornerstone of IOOF proposition for advisers, how do the combined IOOF and MLC platforms stack up? 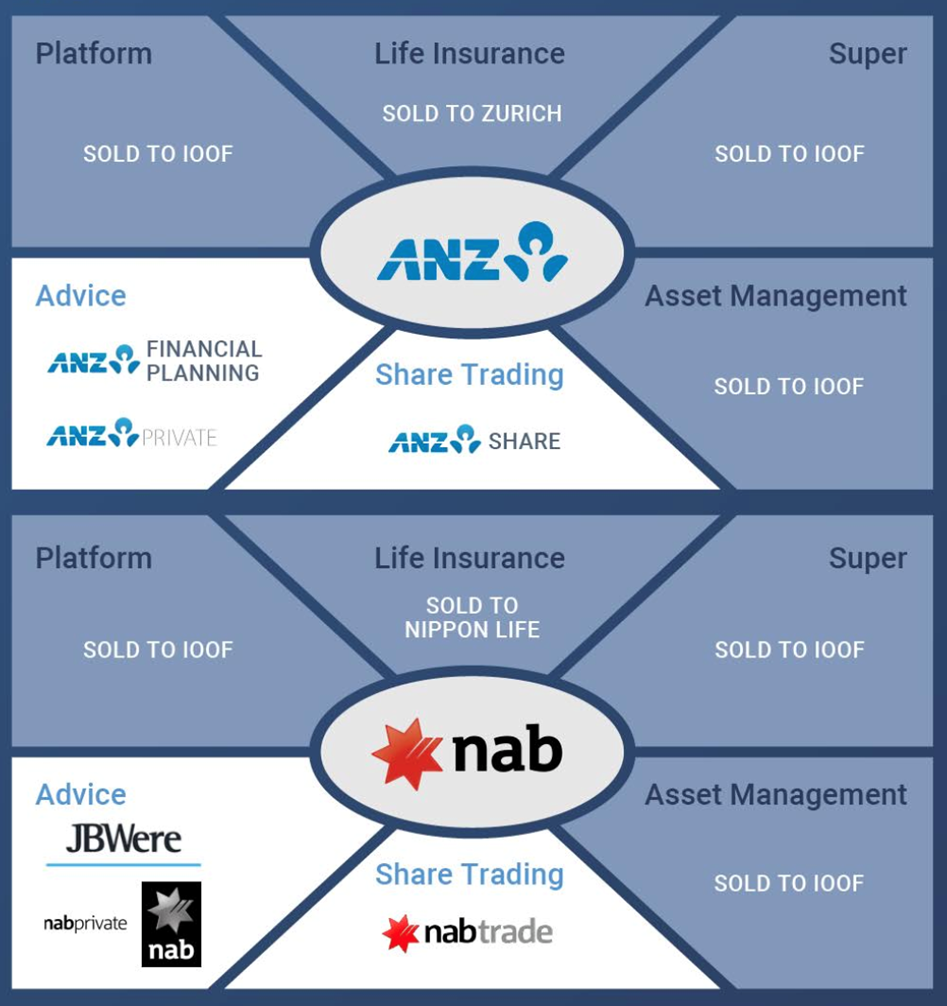 IOOF has embarked on an aggressive consolidation of wealth assets, taking advantage of the banks’disposition to exit advice. Our first figure shows some of the assets gobbled up by IOOF after recent acquisitions from ANZ and include the procurements from NAB in the new deal.

The integration of former ANZ businesses and the absorption of MLC has seen IOOF grow massively in terms of both FUM and adviser numbers. The new combined numbers being spruiked by IOOF are based on the assumption that all former MLC advisers will transition to IOOF - which won’t actually happen. IOOF head of advice, Darren Whereat admitted as much in an interview with Professional Planner where he said “We’re not arrogant enough to think we’ll get everybody…they don’t automatically come across as part of the transaction.”

IOOF is currently reordering its licensees under it’s “Advice 2.0” overhaul, rationalising them into integrated and holistic advice groups. The self-employed MLC advisers will be given the choice of transitioning over to any IOOF brand and Whereat believes IOOF’s value proposition will promise investment around areas including technology, tools, staff and processes and compliance. “We believe that our offer is compelling, particularly around our technology … one that is working and one that’s being used by advisers at this stage and we’ll continue to invest in that over the next number of years,” Mr Whereat said.

Since technology is given as one of the key inducements for MLC advisers to make IOOF their new home, and the potential dominance in the market, we thought it might be interesting to look at the historic view that advisers have had on the platforms housed by the new dominant player. 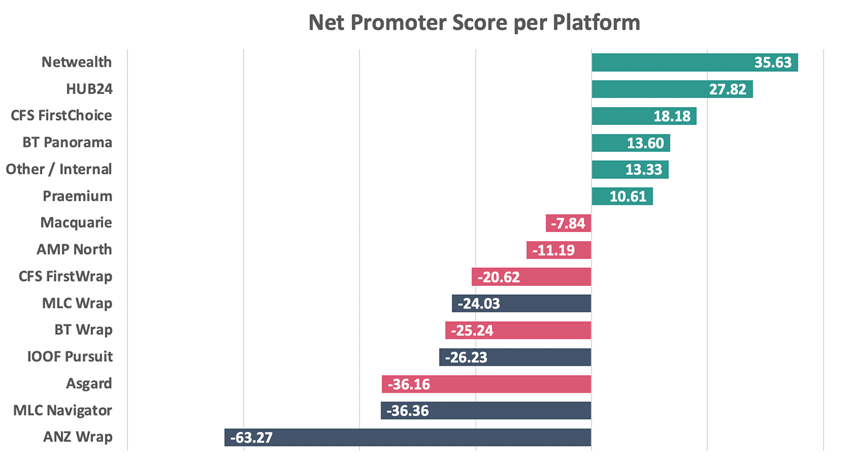 Results from our 2019 Advice Landscape survey have been updated with more recent responses. As our second figure shows, When advisers were asked how they rated the platforms they used, MLC and IOOF (including legacy ANZ) platforms were among the lowest rated in terms of Net Promoter Score (NPS)*. IOOF undoubtedly face a huge challenge dealing with the migration of clients and platforms into their operations. Not only with the new MLC acquisition, but with the continued absorption of former ANZ licensees.

Comments from advisers reflected the challenges facing IOOF with regard to the performance of their Platforms. Comments included “The platform has substantially grown after the acquisition of the ANZ licensee's, and I think that management are struggling to align all its business to work in a cohesive manor, bottom line is, they may have taken on more than they can handle and its affecting the advisers and their clients in a negative way”. Another said “It’s ok to use but good support. It is a bit outdated with the functionality of the platform and an update in technology would be good”. Criticism of the legacy technology was a consistent theme “Old technology that is in desperate need of a thorough overhaul to remain relevant” was illustrative of much adviser feedback. Updating platform technology is not an inexpensive walk in the park, as anyone with knowledge of BT Panorama would attest.

Of course, the feedback wasn’t all doom and gloom and there were plenty of advisers who had good experiences and said positive things, particularly about the service and support they received. Adviser Ratings also collected feedback on specific aspects of the adviser experience with platform, and as our third figure shows, here the IOOF and MLC platforms consistently scored between 3 and 3.5 out of 5.

There is no doubt IOOF are aware of the challenges they face. There will be massive amounts of work to do integrating and/or sunsetting these complex legacy technologies and indeed the massive customer migrationthat must follow. The economics around customer retention may also be challenged as increasingly open architecture models pursued by licensees together with application of best interest duty raises the potential for more IOOF / MLC advisers to transfer clients to competing platforms. Together, these are clear and present risks in this deal.

IOOF estimates that the addition of MLC means a doubling of their client base from 1.1 to 2.2 million. Regardless of the huge numbers being thrown around, the acquisition should only be considered successful if IOOF can prove to advisers and their clients that they are committed to improving the services that they offer both. If they can then they will have not only had a positive impact on the professionals in their network, they will have gone some way to regaining the public’s trust in the industry as a whole.

NPS is calculated by getting customers to rate a product or service out of 10.

"The article reference to platforms is out of date. IOOF are developing both the new eXpand and Essentials platforms and can be used now. So referencing a survey result to the old IOOF Pursuit Select platforms is irrelevant. Many IOOF licensees make platforms such as Macquarie Wrap, BT Panorama & CFS FirstChoice available on their APL, so planners are not forced to use an IOOF platform. MLC advisors should look beyond the platform choice debate and see whether one of IOOF's licencees are a good fit for them going forward."

"It is interesting IOOF think that scale makes them the best wealth adviser. They offer a vertically intergrated model that was shown by the Royal commission to be an absolute failure to clients. Not only that they say they have invested in technology - so is this the return of the plug in the client data spit out the plan. Furthermore if you look at the management positions held within IOOF - you see a number of promoted individuals who had cause to front the RC and even now have to front the High Court. Darren Whereat came from ANZ where he allowed a adviser to keep on practicing after he failed an audit that meant he could no longer practice so they could sell his valuable book of clients. https://www.afr.com/companies/financial-services/ioof-promotes-royal-commission-witnesses-20200302-p5462u Ethical behaviour can not be learnt and I would say IOOF fails at the first hurdle by promoting from within bank world where these type of behaviours were accepted for so long!"

"AR wouldn't have the information on practice management software and advice production, so they're just using information they do have on platforms as a proxy for tech in general. Not sure if it's a good one?"

"Isn't it an out of date 'vertical alignmentesque' presumption that advisers will migrate to IOOF / MLC platforms if they join IOOF? I'm aligned with MLC and use Macquarie (like many peers). They offer a significantly discounted rate card and this is better for my clients. I can't see how moving to a more expensive, poorer quality platform would be in anyone's interest? Surely as per James' point, the adviser technology around practice management and advice production will be paramount in any adviser decision to move. Other drivers would be, "Is the licensee going to be the target of ASIC" (in this case with 1900 advisers I suspect yes, not a great ingredient for practice efficiency) or "Will the licensee be around in years to come (i.e. the small / mid-tier AFSLs that are running at a loss or just scooping up the riff-raff). The decision on licensee is a tough one!"

"When considering tech it is very narrow to just consider the platform. A greater issue is the integration of practice management software and the delivery of advice that is timely and compliant. "

"How do I become an IOOF adviser?"