The volatility of asset prices, being based on the swinging perceptions and emotions of humans, is completely natural. For some, the ride is very uncomfortable and they want out; for others, the volatility creates opportunities and can actually be rewarding. If the foundations are strong, it becomes a very good time even when there is apparent confusion around. Justin Hooper from Sentinel Wealth in Sydney, has more...

As most people make their way to work while enduring their commute, I have the privilege of enjoying one of the world’s greatest commutes – Manly to Sydney city via the fast ferry. I’ve seen whales and dolphins, but the scenery alone is amazing.

I usually catch the fast ferry which is a high-powered catamaran and creates a pretty smooth ride. But when the swell is up, I catch the old ferry, a single hull which rocks and rolls and moves up and down like a bucking bronco. It’s a bit of fun and I feel safe in the knowledge that the ferry itself is a quality vessel and the crew know what they’re doing — and that gives me the freedom to enjoy the ride. 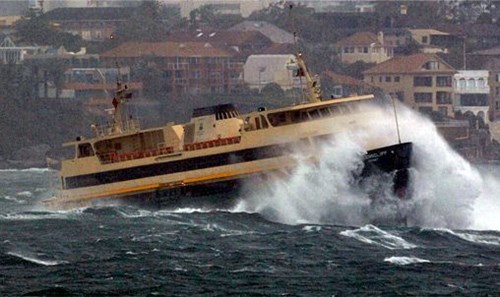 The volatility of asset prices, being based on the swinging perceptions and emotions of humans, is completely natural. For some, the ride is very uncomfortable and they want out; for others, the volatility creates opportunities and can actually be rewarding. If the foundations are strong, it becomes a very good time even when there is apparent confusion around.

The current market volatility can appear very confusing. There’s no denying that there are many real changes in play and it’s increasingly difficult to separate them from the noise. Investors, being focused on the future, have to not only separate the fact from fiction but also try to figure out the potential long-term impact of the real issues on asset prices. It’s easy to get confused.

Trade
Trade is the biggest factor for investors, and fully understanding all the implications is complicated, especially when trade issues are in the headlines daily. With worrisome headlines, investors sell. Optimistic headlines, and investors buy.

A truce negotiated at the G20 meeting delayed tariffs on $200 billion in Chinese goods from rising 10% to 25% on January 1. But now there’s a deadline to negotiate an accord, with a deadline of the end of February. Trump is looking for structural changes on a myriad of trade and technology issues. It’s a change to the rhetoric of the past 40 years – which was previously around free trade and the ‘global village’.

The Fed
The Federal Reserve has a very big role in the US economy and therefore a big impact on market prices. It is tasked with trying to keep the economy on an even keel, and uses monetary policy (mainly interest rates) as its lever. Although rates are still at historically low levels, the Fed has increased rates eight times and its chair Jerome Powell’s comments that rates are “a long way from neutral” and “just below the broad range of estimates of the level that would be neutral” has created some uncertainty.

It’s a delicate balancing act.
If the Fed raises rates too slowly, it’s possible that financial imbalances get embedded in the system. Raising too quickly and the Fed prematurely ends the economic expansion.

Investors are self-interested and generally short term so they worry that the current approach may be too aggressive, and will slow the economy too quickly.  A classic example was evident on the 19th December when the Fed raised rates by 0.25% and announced that they expected to raise twice in 2019. After being up 300 points, after the announcement the market fell around 600 points to close down for the day. All because the expectation was that the Fed would say there would only raise rates once in 2019.

The economy, and late cycle
In the quarter to 30 September, the biggest 500 companies had increased profits of 28.3% compared to a year ago, with 77% of companies beating analyst expectations.

Analysts expect profits for these companies to rise 16.2% for the next quarter but this is down from 20% when the quarter began. It’s highly likely that some of the market volatility we’re seeing is likely related to reduced profit expectations.

The Sydney property market is, in my view, somewhat of a phenomenon — not in itself, but rather in the way it is perceived. Those who have been fortunate enough to enjoy its benefits over a long period (and particularly over the past 10 years) argue that the recent price falls are irrelevant. They feel confident knowing that Sydney has a big future. These people may be surprised to know that the US stock market has outperformed Sydney property over the same time.

Price volatility is a part of life, just as the swells are part of commuting via ferry.

Justin Hooper in Managing Director of Sentinel Wealth in Sydney.

"US stock market has outperformed Sydney property in the last 10 years?? Has it doubled? That's hard to believe - maybe from the pits of the GFC?? Selective stats if true"