Magellan - Lessons Learnt in Due Diligence

Magellan's, and Hamish Douglass's personal issues have been more than well documented in the media over the past couple of months, so there doesn't seem to be much gained by repeating them. The facts are all well known, thanks mainly to the size and success of the business since being established in 2006, and the high profile given to the individual along the way. But when it comes to due diligence the lessons are often learnt in hindsight.

Magellan grew to be (and still is) a significant success story both in Australia and globally. It's easy to criticise, particularly for rival fund managers who might have struggled to attract FUM when so much was flowing into their rival in spite of Magellan's relative underperformance over the last 5 years. To build FUM of $10bn is no mean feat, getting to around $100bn is extraordinary, and reflects not only performance, but outstanding business management and marketing/distribution along the way.

However, there are some salient lessons to be learned - not only within Magellan, but also by other fund managers, investors, advisers and the industry as a whole, particularly the research houses, ratings agencies and consultants who have been part of the manager's success over the past 15 or so years.

The success enjoyed by Magellan’s business requires dedicated management, as does listing and running a public company. Whilst Hamish Douglass's ability is undoubted in both areas, there's only so much one person can do, and how far his focus can stretch. Granted, Magellan had (and still has) a depth of management and a talented team beneath the chairman, but the focus was all Douglass internally and externally, and as such he was wearing too many hats.

Lesson #2: Size matters, but small and nimble has its benefits.

Fundmonitors.com have frequently shown that as a manager’s funds under management grows, the ability to outperform one's smaller peers becomes more difficult.  A combination of size and concentration limits opportunity, and creates issues when or if the position, or the market turns against you. The Magellan High Conviction Fund has exposure to just 8-12 stocks, while the larger Global Fund has 20-40 stocks, which is still concentrated.

The benefit of size (apart from the very healthy income stream) is that it opens the door to institutional mandates, not available to smaller managers due to the investor’s own concentration limits. As seen with Magellan, this can create business risk in the event that a major institution redeems.

Fundmonitors.com have often quoted Harold Geneen's "words are words and promises are promises, but only performance is reality". The Magellan Global Fund has returned just short of 14% per annum over the last 5 years which is a solid result, but more recently the fund has underperformed relative to the market, and to many of its peers. However, the aura of Douglass, and his ability to hold an audience, was legendary, and the reputation of Magellan itself carried great weight with both investors, advisers, consultants and research houses. 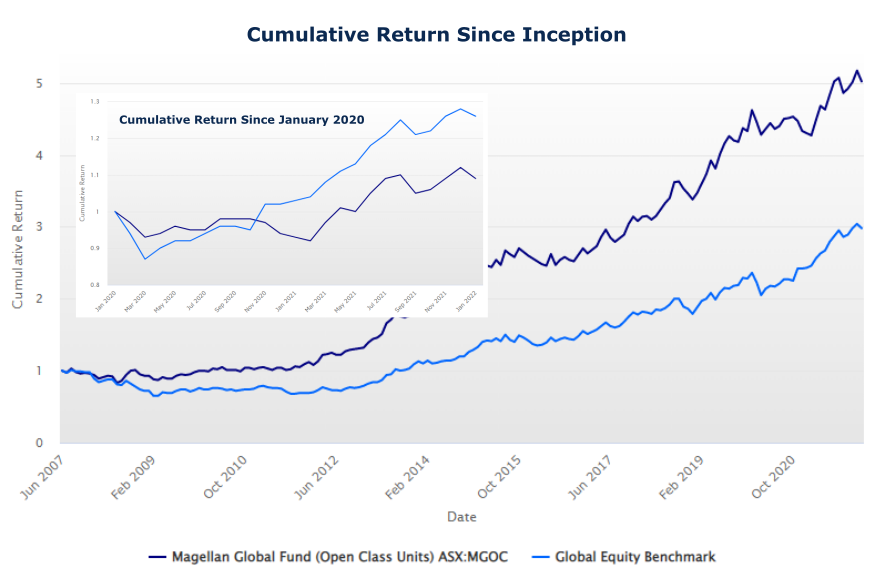 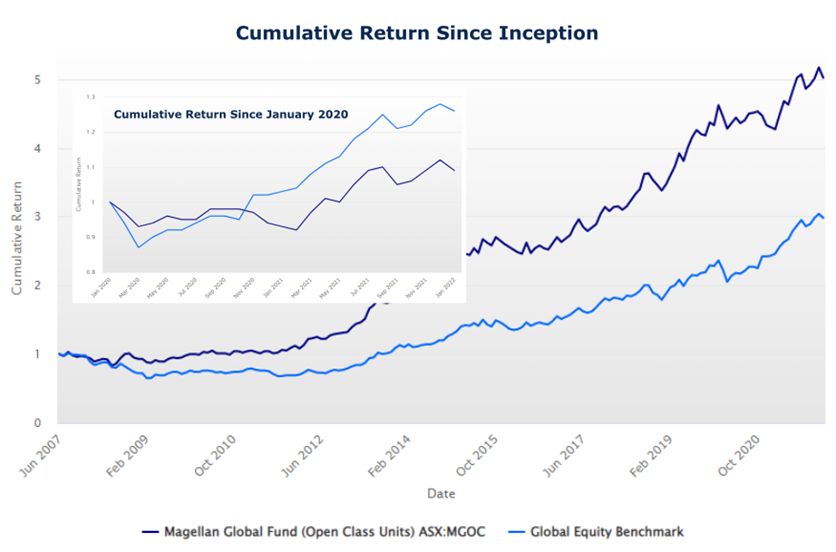 There used to be a saying in the early days of IT that "no one ever got fired for buying IBM". In the same way, an allocation to Magellan has been a safe option. The due diligence had been done by the rest of the market, making it easier to go with the flow.

That allowed the recent relative underperformance to be ignored, or at least not be given the level of scrutiny by the gatekeepers and so called experts whose job it was to know and act accordingly.

However, for a mere analyst within a ratings house, calling out that underperformance, or for that matter the key person risk involved in a star fund manager and consummate media performer, could be a brave, and possibly career defining act. Unless of course the proverbial has hit the fan and everyone's saying the same thing, and it's daily news in the financial press...

Adjusting your research rating AFTER the event is akin to closing the gate after the horse has bolted, but don't get us started on the potential conflicts of interest involved in the fund manager paying for the ratings they receive.

Lesson #4: Do your own research, and above all else, diversify.

Not everyone has the knowledge or skill to fully analyse a fund's performance numbers, risk factors and KPI's, but there's enough core information available to all users of www.fundmonitors.com to be able to compare, measure, rank and make good decisions as a result. Forget the names and reputations for moment, do the numbers, and then diversify across strategy, asset class, manager and fund - allowing for the fact that Magellan might well remain part of that diversification.

"You place too much importance and emphasis on short term noise. They still retain a large team of the same quality analysts and currently replaced the 'key man' with two significant and impressive people. Likewise, around 18+ months ago Hammish had warned ahead of time that they'd underperform while COVID19 was severe, so it wasn't the 'surprise' or big issue that the media jackals and yourself are trying to portray - look at performance from inception as opposed to the last two years in isolation. These article wreaks of contemporaneous-bandwagonism. We're more than comfortable being contrarian and remaining in place, placing new FUA with them as well as taking positions in their direct Magellan Financial company share on the ASX."