Licensee Losses: The Segments Tipped To Contract The Most

It’s no secret the adviser market is in sharp decline, but some segments are falling faster than others. We’ve surveyed advisers and have analysed which areas will contract the quickest.

Given the avalanche of change associated with the industry’s professional evolution, we’ve long predicted adviser numbers would fall below the 15,000 mark.

From a December 2018 peak of more than 28,000, Adviser Ratings analysis shows adviser numbers have dropped by almost a third in less than three years. Last month, they sat below the 19,000 mark.

The contraction will continue, due to a confluence of factors. These include impending education deadlines, the compliance burden, cost pressures and the limited pipeline of new talent to replace retirees or career changers.

Eventually, there will be a recovery and stabilisation in line with what happened in the UK after the Retail Distribution Review; however, we think this is still a while away. Our most recent forecast is that advice numbers will settle around the 13,500 mark.

Inside our licensee forecast

For our most recent Landscape Report, we surveyed advisers about their intent to depart the industry and/or complete the Financial Adviser Standards and Ethics Authority (FASEA) exam. Based on the responses, we have made predictions about the licensee segments that will lose the most advisers this year.

With one exam remaining, there are approximately 3,000 advisers still to complete the exam. Some will have a 9 month reprieve if they have failed twice.

As Figure 1 shows, the diversified segment (eg AMP, IOOF) – which was the second-largest segment at the start of the year – is tipped to continue to lose generally a higher share of pure financial advisers (32%) across the calendar year, as both AMP and IOOF consolidate their adviser bases.

However, if we look at the losses as a proportion of segment size, our Landscape Report analysis shows the limited licensee market is expected to contract the most. We expect more than 70 per cent of limited licensee advisers (ie accountants) to depart by year’s end.

At the other end of the spectrum, the privately-owned licensee segments – particularly at the smaller end – have been forecast to contract the least (ie 20%)

There are a couple of explanations for the polarity. First, the love affair we saw between accountants and limited licensees we saw after the removal of the accountants exemption in 2016 appears to have evaporated.

Second, we’ve seen a swift move away from institutions, towards the private licensing model, which can be partly explained by the reputational damage the big institutions suffered from the Hayne Royal Commission. 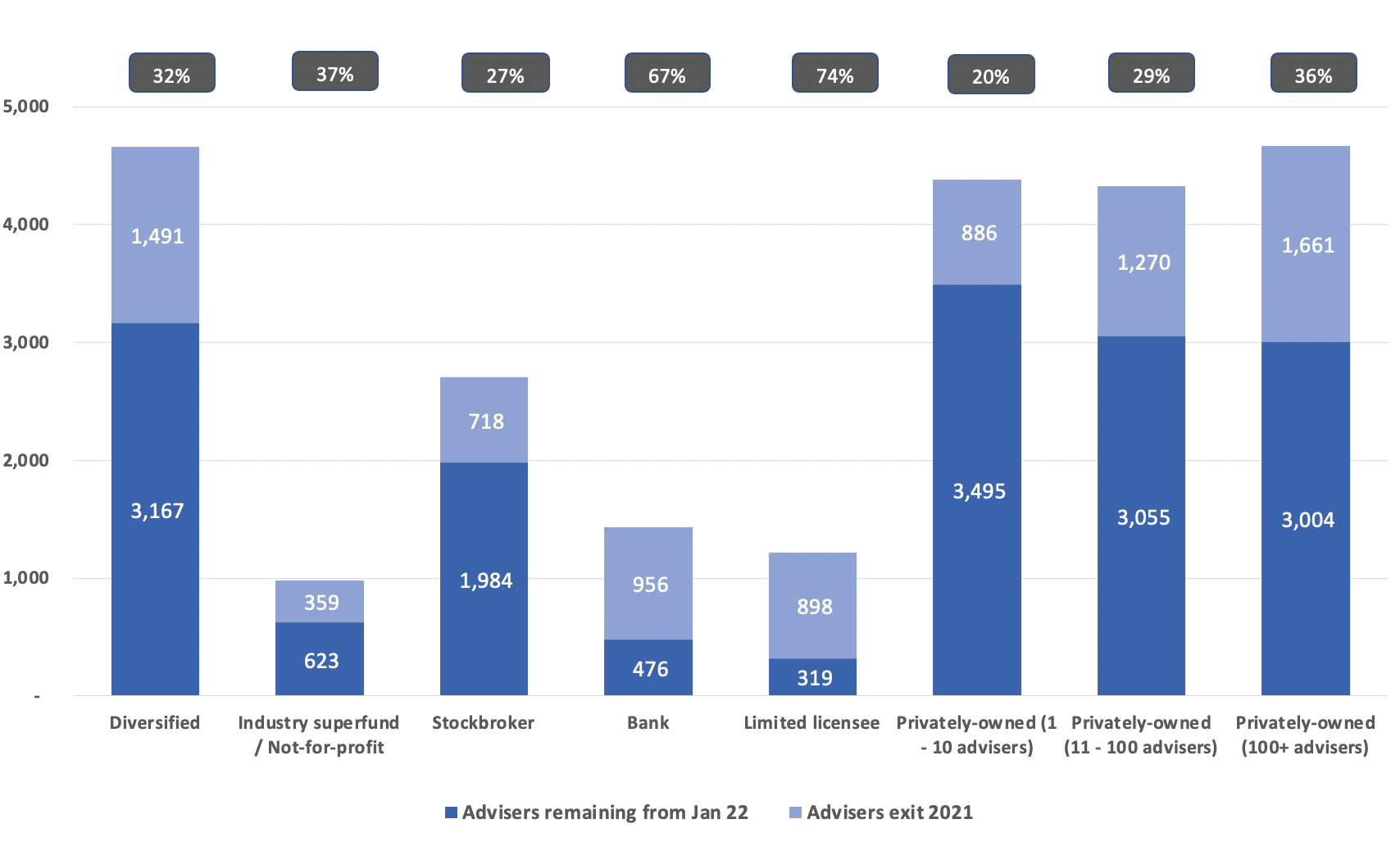 So where does this leave us - we predict, a further 2,000 advisers will hand in their licence on 31 December leaving just north of 16,000 advisers in the industry. Our number factors in the higher than predicted attrition of advisers leaving / retiring who have already passed the exam.

While there is still one quarter left this year, our forecasts have already started to materialise. The limited licensee segment has already declined even further than we predicted and now accounts for fewer than 700 advisers. Meanwhile, the privately-owned segment has held ground better than most, although larger privately-owned licensees have had a sharper downward trajectory than their smaller peers. Watch this space.

You can read about the latest licensee and adviser changes in our Musical Chairs Report for Q3, which will be released shortly.

"Howe do you account for the hundreds of advisers who have decided to focus on their HNW / Sophisticated clients & no longer advise Retail Clients ? Sure, they may no longer be in the Retail Advice business, but by the same token, they are still in the industry, probably advising the most profitable segment of the market."