Our latest research shows the potentially massive impact that new regulation has had on advisers joining and leaving our industry. All of the gains in adviser numbers last year have been wiped out in the first 6 months of 2019 as record numbers of adviser’s cease being authorised to provide advice. In terms of raw adviser numbers, the industry grew by 10% last year and has shrunk by the same amount this year.

Our latest research shows the massive impact that new regulation has had on advisers joining and leaving our industry. All of the gains in adviser numbers last year have been wiped out in the first 6 months of 2019 as record numbers of adviser’s cease being authorised to provide advice. In terms of raw adviser numbers, the industry grew by 10% last year and has shrunk by the same amount this year. 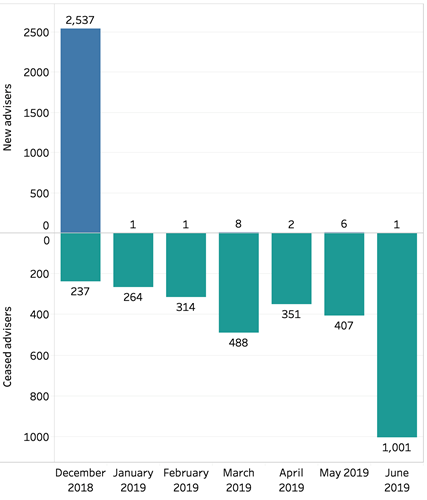 After 2,537 advisers joined the industry prior to December 31 last year in order to beat the deadline, in the time since then nearly the same amount have ceased being authorised to provide advice. The first 6 months of the year have only seen 19 advisers authorised as new advisers.

For the 2018 calendar year, we saw 8,843 new advisers joining the industry, and just over 6000 adviser authorisations (6,014) becoming ceased in the same period. This meant that there was a net increase of 2,869 advisers for the year, meaning there were about 10% more advisers at the beginning on 2019, than a year earlier at the start of 2018.

This adviser number gain has however, been effectively wiped out. The latest figures indicate that as a result of virtually no new advisers coming on board, total industry adviser numbers have dropped over 10%, decreasing by 2,825 in the last six months alone. The number of ceased advisers peaked in June with more than 1000 leaving the industry – more than double any other month this year.

The increase in cessation of advisers may be a result of the many advisers who were intent on leaving the industry having tied up their loose ends prior to the end of the financial year.

Although it will take time for any trend to be confirmed, the calls coming from sections of the industry warning of an adviser exodus due to the FASEA reforms appear at first glance to be warranted.

For a discussion on the startlingly low numbers of new adviser authorisations so far this year, See here.

We’ll keep crunching the data to bring you the latest figures and trends effecting the industry in an attempt to illuminate and makes sense of the disruption the industry is in the midst of and the instability it is causing.

"Yes the June outlier is due to WBC / BT ceasing to provide financial advice. I expect July and August will have some of these added back as advisers find a new home. That said as for the long term prospects of advice, this is definitely a period of change. I see many advisers leaving the industry, which will make those who are left behind more in demand and valuable to employers / businesses. If you can put up with this challenge for the next few years, I think things will look good in the long run. I am in my 30's and have already completed most of the study required (still need to do exam + ethics course) so this is ok for me and I would have been more frustrated if I hadn't done this study yet or done CFP like many of my colleagues. But if I was an adviser over 50, then I would most likely sell out and move into something else. The cost of time + money will be too great for many to continue. There will be many client books for sale I would assume in the coming years which also provides opportunity for those wanting to take the risk. The risks of further regulation including potential removal of insurance comms, additional SOA requirements and the costs to prepare advice going up will have to be considered. A time of change indeed. "

""For a discussion on the startlingly low numbers of new adviser authorisations so far this year" -- really? You were startled by the low numbers of registrations this year? Everyone else fully expected there to be almost no new advisers registered during 2019 given that all 'new' advisers now need to complete the professional year before being able to get registered. The 'scramble' for new entrants to finish off their requirements under the 'old' rules and get registered before 1 Jan 2019 was also no surprise. The large number of advisers ceasing in June might be due to the reality of the FASEA exam and educational requirements hitting home - for existing advisers the time has come to decide whether or not it is worth the effort and expense of doing additional education and the exam, or whether they will simply take 'early retirement'. Only after the transition years (2019-2022) have passed will we be able to look back at the data and see if the changes actually had a large overall impact on the number of advisers in Australia, or if it simply changed the timing of when new advisers were able to be 'registered' and when aging advisers decided to leave the industry..."

"No surprise at all. The impost of this ridiculous witch hunt doesn’t allow for advice commitments, service, running the business and heaven forbid family time. It’ll be repetition of knowledge already possessed by most committed Advisors. It’s clearly designed to cut numbers. A boon for Government as many many people will be paying too much tax and not receiving their full social security entitlements with no affordable advice being available in the future. The onerousness of providing simple advice has forced us to decline many clients as it becoming way too expensive to provide. This is only the start! As more and more people are priced out of the advice area only the well off will seek it. The very people who will be in the most need of advice will not receive it, but that’s what the Government wants, to target working Australians....again! "

"Wouldn't the June outlier mainly be because Westpac ceased operating? Sure some found a new home but a lot of others probably haven't."

"Having just received the course content for the mandatory Ethics subject (every adviser needs to complete this (and then potentially for some advisers seven more subjects)), I couldn't agree more with 'Adam was a boy'. There is a lot of work involved in the reading commitment, completing the Analysis, then the Assignment, and then the Exam - I believe far more study involved than what most advisers are expecting. Personally I have between 3 (best case) and 5 (worst case) subjects to complete (currently waiting for confirmation as to how many credits the 4 unit CFP will provide)."

"Not surprised advisers are fleeing. More to come"