If you’re thinking about switching licensee’s, you might like to know that nearly half of all such advisers had the switch formally sorted within 3 days. Continuing the trend, we note as well that our most recent information indicates while 40% of switching advisers came from privately held licensees, the privates were the destination for nearly 70% of switching advisers.

This week we take a look at those advisers switching licensees and returning to the industry in the first quarter of 2019. If you’re thinking about switching licensee’s, you might like to know that nearly half of all such advisers had the switch formally sorted within 3 days. Continuing the trend, we note as well that our most recent information indicates nearly 70% of switching advisers are going to privately owned licensees.

We previously reported that the average time “out” of the industry that an adviser takes when switching between licensee’s was 37 days. This figure, while correct is actually skewed by the small number of advisers who were out of the industry for extended periods (over a year).

In actual fact, almost half (47.86%) of advisers who switch licensees have the process finalised within 3 days. This no doubt ensures continuity for their client base and allows the adviser to keep servicing their clients with minimum disruption. 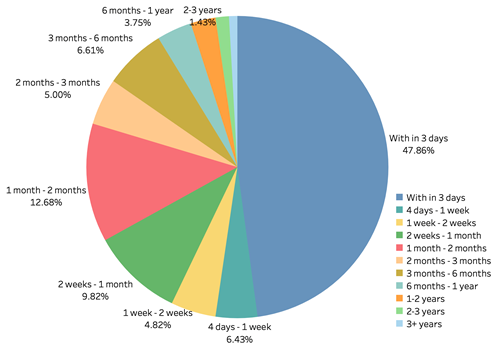 Our pie chart takes into account the 560 switching and returning advisers who have been licensed by a new licensee in the first quarter of 2019. It indicates the proportion of switching advisers and the different lengths of time they have taken from leaving one licensee to joining another. Adding the segments together, we can see that nearly 60% of advisers completed the transition within 2 weeks, and 80% were sorted within 2 months. Nearly all advisers (95%) who were re-licensed in the first quarter of 2019 were unlicensed less than a year, although there is a small tail of advisers (5%) who have re-joined the industry after more than a year out.

This data is a helpful guide to advisers to see what the norm in the industry is and is also useful for people who service the advice industry to get an idea of the generally quick turnaround most advisers make when they leave one licensee. 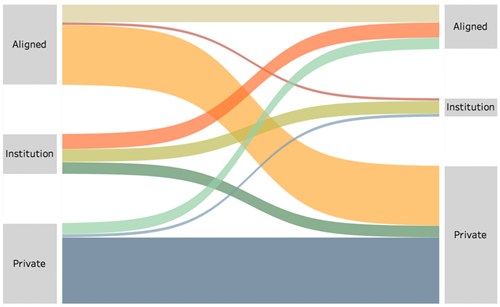 Many of the destination licensees are self-licensed firms, but with increasing administrative burdens and PI insurance rising rapidly for many, if self-licensing is off the table, the choice of an alternative licensee for advisers who are unsatisfied with their current arrangements is less clear than ever before.

Adviser Ratings will continue to bring you more insightful analysis of adviser movements and other industry trends. For more information about our insights contact mark@adviserratings.com.au

"Why don't you actually do a survey and find out how long it actually takes advisers to switch. This article just looked at the ASIC register and examines the time the licensees take to inform ASIC. Switching AFSL is not something done in 3 days. Changing licensees takes months. Most advisers are almost handcuffed to some AFSL's, due to the anti competitive policies and processes required by Australian Corporation laws, privacy requirements and worse still dealer group requirements. In short...months of thinking & planning, a good year to fully consider options, meetings with potential suitors, new SoA's, new fact finds, new risk profiles, new FSG's and disclosure documents, potentially new software, implementing contracts, notifying product providers, updating promotional materials, advertising and then talking to clients. If we asked any other industries to shut their doors for say three months... and stopped trading they'd be screaming blue murder. Three days...nope."

"Good to see most advisers are organised to maintain service to their clients with a minimum time of being unauthorised. Saying they change over the weekend is a little disingenuous and many would be spinning their wheels and going thru weeks if not months of preparations and due diligence to make the change a reality."

"The insto's are shrinking. This will only continue as the banks extricate themselves from wealth. How many licensee are we up to now 1000?"