Jump in Licensees Closing Down

An interesting statistic came out of our recent adviser licensee movement analysis for Quarter 2, regarding the changing nature of licensees themselves. June figures show that or the first time in nearly 5 years, the number of discontinued licensees was greater than the number of new licensee entities for a particular month. We discuss the potential reasons and ramifications here...

An interesting statistic came out of our recent adviser licensee movement analysis for Quarter 2, regarding the changing nature of licensees themselves. June figures show that or the first time in nearly 5 years, the number of discontinued licensees was greater than the number of new licensee entities for a particular month.

We found that in the last financial year 340 new licensees have been registered. Our first chart shows historical data for both newly registered and discontinued licensees from the last four and a half years to the present. The spikes in newly registered licensees from mid 2016 to early 2017, which may have been caused in a belated response to the Financial Systems Inquiry and talk of institutions getting out of wealth, shows when the big shift away from institutionally owned and aligned licensees really started gaining some steam. 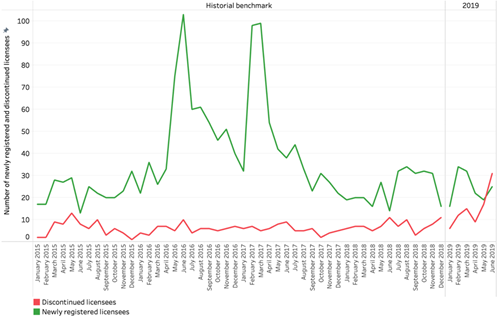 The uptick in discontinued licensees may be the result of the impact of several factors. Increased regulatory and compliance pressures may have taken their toll. There are over 2,200 licensees currently registered, but over half of these (1207) have just one or two advisers and 1,650 have 5 or less advisers. It may be that the unexpected cost pressures alluded to when changing licensee would be compounded with self-licensing - and have started to take their toll. We can see that May and June 2019 have seen the two highest totals of discontinued licensees per month since January 2015. 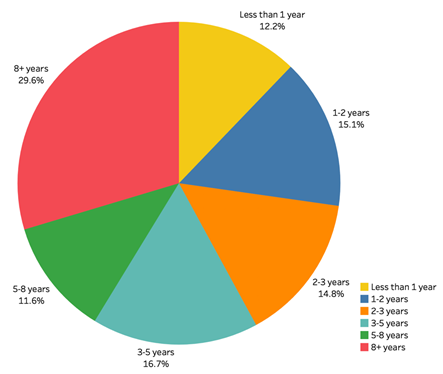 The age of licensees that have recently shut down may provide some more clues to the emerging trends and changes in the licensee environment. Our second chart, which shows the shutdown age of discontinued licensees, indicates nearly 60% of discontinued licensees in the period were less than 5 years old, with nearly half that number closing down after less than 2 years in operation. Clearly for some advisers transitioning to a newly registered licensee was not a long-term sustainable option.

Further evidence perhaps, of the preference for larger, privately owned licensees as being the destination of choice for advisers who are on the move.

We’ll keep track of these movements and continue to investigate the reasons behind them. Their potential importance is reflected in the interest shown by industry media where details of our full quarterly reports have been highlighted, including in the Fin Review and Professional Planner.

"I would think , that by having smaller AFSL holders would prove to be better than large groups! smaller lic holders would be hopefully more diligent and would I hope be more transparent and diligent in working in the best interest of their clients , as they would not want to bear the brunt of dealing with ASIC ETC ! whats everyone else's opinion?"

"How does ASIC propose to to keep an eye on 1,650 licensees that have 5 or less advisers? So much bad stuff could happen in the years it takes them to investigate potential breaches. We all know how slow the bureaucracy can be, meanwhile it will only take half a dozen shonky or out of their depth licensees to keep soiling the name of advice. And where will the recompense come from when these tiny licensees go belly up?"