Is Time Up For The Banks?

The spectre of a Royal Commission into the finance industry is again firmly on the radar and now something the industry should be prepared for. With a lack of cut through by a government facing questions over legitimacy of a number of its MP’s as well as ongoing internal intra-party destabilisation, there is a real possibility of Labor forming government at the next election. Further scandals involving banks are doing nothing to shore up their reputation or purge the notion that there are structural and cultural problems besetting their industry.

The spectre of a Royal Commission into the finance industry is again firmly on the radar and now something the industry should be prepared for. With the latest opinion polls showing the coalition trailing the Labor party 54-46 in the two party preferred category and the seeming lack of cut through by a government facing questions over legitimacy of a number of its MP’s as well as ongoing internal intra-party destabilisation, there is a real possibility of Labor forming government at the next election. Further scandals involving banks are doing nothing to shore up their reputation or purge the notion that there are structural and cultural problems besetting their industry. 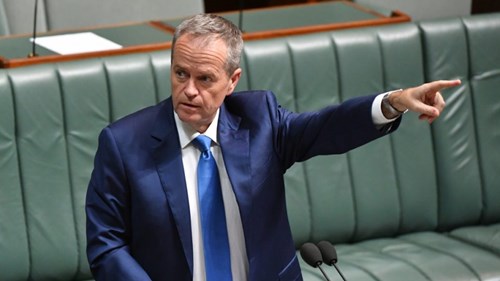 Shorten indicating the corner he is backing the banks into

In a wide ranging interview with Professional Planner the Labor leader Bill Shorten reiterated his party’s conviction to hold a Royal Commission into the banking industry that would include “close examination of the conduct of banks in financial advice and superannuation”.

The banks are still struggling to explain why a Royal Commission is not needed and are doing themselves no favours in trying to convince the public it is a bad idea. The money laundering scandal at CBA is just the latest high-profile hit to the bank's reputation, and with criminal elements and terrorism linked to the scandal, it makes it a lot harder to frame this particular shortcoming in terms of "class warfare against the finance sector".

Bill Shorten is currently experiencing a "golden run", in part because of government inadequacies, and has had time to outline what a government headed by him would look like.

In the interview, Shorten countered the argument that "we’ve had enough inquiries and reviews into the industry already". He said “A Royal Commission is the King of all inquiries…it has the power to look behind. There are basically no excuses you can give not to give evidence. It has very strong powers”. He continued, saying: “we’ve tried just about everything else, haven’t we? Too many problems occur too often. And every time it does, we all "get the mea culpas" and they say it won’t happen again, until the next time.”

Undoubtedly the Labor leader would see recent events further bolstering his case. Recently the CBA faced rare criticism on three fronts from the Reserve Bank, the Treasurer and ASIC. Reserve Bank governor Philip Lowe slammed the banks for a short-term profit mindset and cultural flaws. Meanwhile ASIC Chairman Greg Medcraft, said he was "a little stunned" he had not been told by the bank about the Austrac investigation. Medcraft said “Amongst many of the major banks, we routinely encounter a culture of seeking to delay and frustrate our surveillance, investigation and enforcement work”.

Speaking more broadly about the banking sector, Mr Medcraft said there was a "serious cultural problem" in how the Australian banks dealt with regulators, saying they were "far too legalistic" and did not give enough attention to non-legal risks, such as the hit to corporate reputations.

This "legalistic" issue actually mirrors concerns many advisers have expressed over compliance and regulation in their own industry. Onerous box ticking and red tape compliance, in many cases, does nothing to improve consumer outcomes and simply adds further cost burdens to the industry. It is the finance industry’s own version of security theatre.

A recent long term review report published by ASIC regarding firm compliance with financial services laws found that there were shortcomings in the current compliance and reporting regimes of the “Big 5” that the report covered. The report looked into five of Australia’s largest banking and financial institutions between 1 January 2009 and 30 June 2015. One of the findings indicated that licensee’s adviser audit processes were effective in only 18 per cent of files reviewed – “effective”, meaning the findings by the licensees’ auditors aligned with ASIC’s own file review. If current regulations are not effective one has to question what effect further regulation will have. The answer is obviously not more regulation, but more effective regulation.

Until this is achieved, the industry will continue bleed trust with the wider community.

"Add to this the class action just announced and the CBA is toast. Getting rid of Narev now seems like a sacrifice. The board must be scrambling with more details being made public about what they knew and when they new it. Sitting on this for 2 years may at first have seemed prudent. Now it just makes them look dodgy."