We like to think that we make rational decisions when purchasing things, but research in the field of Behavioural Economics shows that is not always the case.

If we’re going to spend our hard earned on something, most of us would like to think that we’re in control of the thoughts behind the decision making process and that we make more or less rational decisions when purchasing. We all like to think we’re not really influenced too much by advertisements and marketing. However, research in the field of Behavioural Economics has shown that our decisions can be influenced by factors that result in decidedly irrational choices.

In his book Predictably Irrational: The Hidden Forces That Shape Our Decisions, behavioural economist Dan Ariely talks about factors that influence our decision making that we’re not generally aware of.

Ariely illustrates in his book how this plays out using the choice of all expenses paid holidays in either Paris or Rome. Both are great cities of the world, have great sightseeing, food and shopping. The decision between the two is not effortless. It is quite hard to compare. However, if we introduce a third choice – that of the Rome package without breakfast included – something strange happens.

This “relativity bias” applies across all sorts of decisions, large and small.

By introducing the third “decoy” offer, advertisers can predicably steer consumer choices in a particular direction. A famous example Ariely uses was when the economist magazine advertised three offers for subscription to their publication. Web subscription only for $59, print subscription only for $125 or both web and print for $125. The middle offer is obviously inferior to the last offer. When he surveyed 100 people on which they preferred, 16% chose the first web only offer no-one chose the middle offer and 84% chose the last offer. 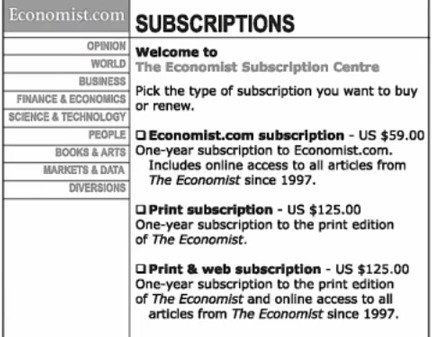 So why bother putting in an obviously inferior middle offer?

The reason is revealed in the choices of 100 people who are offered the same first and last offer – but with the middle (inferior) offer removed. In this survey the number of people who chose the cheaper “web- only” offer jumped to 68%, while only 32% of people chose the more expensive combined offer.

This is the power of our largely unconscious relativity bias, and variations of this heuristic can be found everywhere. Wine lists, for example that have a very cheap and very expensive bottle at each end, with the choices they would like you to make bunched up in the middle. Similar unconscious heuristics are on display in the famous “jam experiment” which showed the idea of choice overload – that presenting customers with too many choices actually inhibits customer purchases.

Author of The Idiot Brain, Dean Burnett provides further evidence of our illogical, irrational brain as illustrated via the polemical nature of much political debate, whether it be about Climate Change, Brexit or the election of Trump. He writes “Recent polls show support for Brexit and Trump is relatively unchanged, at least among those who supported them originally. One important factor that pollsters will forever struggle to account for, is that the human brain really doesn’t like changing its mind. As long as we believe the original choice (such as a political choice) was our own, it doesn’t matter if it was made based on ridiculous and impossible promises; the human brain seems wired to just accept it rather than admit it may have got it wrong.”

Burnett explains that one argument why this is so is that “our decisions are a big part of how we define our sense of “self”, and if we doubt our decisions, this causes uncertainty and unease at a very deep level of our being. We made a decision based on our own evaluation of the information presented, which was obviously filtered through our existing attitudes, beliefs, opinions and conclusions. As a result, our brains reflexively downplay or dismiss any information that causes us to doubt our decisions, because that casts doubt on our very ability to function. Anything that causes our behaviour and our beliefs to come into conflict is not something our brains like. This results in well-known cognitive biases, where we do our best to dismiss anything that suggests we are wrong, or responsible for bad things happening”.

Behavioural economics has highlighted time and again that we are anything but the “rational, self-interest maximising Homo Economicus” that traditional economic textbooks promoted. In fact, we often make irrational choices and as this becomes accepted, we are open to be manipulated, cajoled and steered in all types of directions by these clever marketers and advertisers who have access to the latest psychological research.

We’ll never be fully conscious of all our decision making processes, but just being aware that these types of dynamics exist is nice to know. So if you still think you’re not effected by advertisements – remember the business dictum proffered by well-known Australian entrepreneur and media buyer Harold Mitchell, who says – “You wanna know why big companies spend billions of dollars on marketing and advertising their products? …They do it because it works!”

"One would think that the best financial planners and coaches would be primarily focus on human behaviour being the dominant determinant of real life financial outcomes for people....hmmm."

"This is SO fascinating!! I've long been interested in the psychology behind decision-making, but I am now going to think twice before I make a choice between 3 options with my money!"