The exit of Westpac from advice has seen hundreds of advisers forced to seek new licensees to operate under. The closure of Financial Wisdom less than 12 months away and the fate of hundreds of AMP advisers still up in the air. These and other announcements point towards continued fragmentation of the advice market. Given the sheer number of advisers looking for new homes, many advisers may be anxious that they won’t be able to secure a new licensee, but closer analysis shows this fear may not be warrented.

The exit of Westpac from advice has seen hundreds of advisers forced to seek new licensees to operate under. The closure of Financial Wisdom less than 12 months away and the fate of hundreds of AMP advisers still up in the air. These and other announcements point towards continued fragmentation of the advice market. Given the sheer number of advisers looking for new homes, many advisers may be anxious that they won’t be able to secure a new licensee, but closer analysis shows this fear may not be warrented.

Adviser movements are nothing new, but the scale and speed of adviser cessation and migration in recent times is. The closure of one mid to large sized licensee can scatter advisers into literally dozens of new licensees. To demonstrate the effect that closing down the licensees of a major player has, and to see the contribution it makes to the continuing fragmentation of the industry, we can take a look at adviser movements for just one of Westpac’s discontinued aligned brands – Securitor.

Securitor ceased providing licensee services on September 30, 2019. At the beginning of Q3, there were 175 advisers still licensed under the Securitor brand. During Q3 alone most of these advisers (167) found new homes, while 8 remain without new authorisations at the end of the quarter.

Outgoing Securitor advisers were housed at 32 different licensees. As an illustration of the advice industry’s fragmentation, Securitor provides a characteristic example. 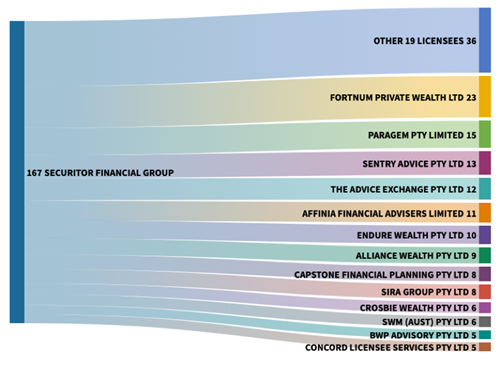 The story is similar for the other Westpac licensees, with the 69 remaining Magnitude advisers going to 18 different licensees and 207 former Westpac Banking Corporation (WBC) advisers being spread across a total of 61 new licensees.

Elsewhere in the industry, there have been several events and announcements that will continue the fragmentation of the licensee market. Aside from Westpac, the announced management buyout of AON in Q2 saw more than a third of AON’s advisers leave since, with 50 of these going to 21 different licensees in Q3.

AMP’s recent announcements of the rationalisation of their business model and continued uncertainty around their BOLR provisions has made life hard for many of their associated advisers. Q3 saw 23 AMPFP advisers move to 21 new licensees.

Q3 also saw the continuing reduction of advisers from Commonwealth Financial Planning, which shed over 20% of their advisers with 27 advisers going to 17 different licensees, while a further 95 advisers remain ceased at this stage.

We can see from the case of Securitor – the vast majority of advisers sucessfully found new homes within 3 months. This would be seen as a positive for any moving advisers, as it indicates an appetite in the industry to house moving advisers AND the ability to do so across a disparate number of licensees. The concerning figure would be the large number of Commonwealth advisers still ceased after leaving their licensee in Q3. Whether this is just a function of timing and most will find new homes in Q4, or a consequence of the unwillingness of the market to house former advisers from a particular licensee, remains to be seen.

Overall, the scale of this re-distribution, and its effects on the stability of the industry should not be underestimated. Fully 5% of the country’s advisers were housed in new licensees during Q3 alone (this used to be the approximate size of the annual migration), meaning they will have to transition to different licensee obligations and adjust to alternative reporting and business practises while still trying to adequately maintain their core business of servicing their clients.

The other side of the equation is of course the challenges faced by the licensee’s taking new advisers and managing their own licensee expansion. Mid-tier licensees taking on dozens of new advisers like Viridian, Fortnum and Sentry face the challenge of successfully integrating scores of advisers and the attendant due diligence and onboarding concerns. These are challenging times all round.

"This does not even factor in the hundreds departing the NAB Licensees as a result of the significant fee increase. The industry is going to be decimated as a result of the RC fallout. Whilst myself being part of these numbers the concening part is that some licensees conduct very little due diligence in comparison to some other groups. By far the best due diligence I experienced was Affinia. I was literally blown away how thorough they were and in fact 10 times more thorough then any annual audit I’ve ever experienced previously across multiple different licensee."

"I think that the headline should be re-framed... what will it mean to consumers.. politicians might actually take notice"

"it would also be worth highlighting that many of the new licensees that are now home to ex-Securitor advisers are businesses that have gone down the self-licensed path. That in itself creates further fragmentation of the advice network."