In Case You Missed It - Guest commentary on Ethics in FA

It’s sometimes hard to keep up with everything that’s going on and you’ve told us you want to be up to date with the latest developments in the industry so we’ve started to compile a list of topics and articles that catch our attention - things that you might have missed…we asked a guest commentator for their take on Ethics in finance after reading the SMH article below. They said sure – as long as we attributed it to a person called “Age Old Wisdom”. So here is what they said…

Improving the public perception of the finance industry is always on the agenda, along with increasing qualification standards for individual advisers, the value of an ethical approach is often talked about to change the “culture” of institutions. But are moves to improve culture genuine or are there other motives like fending off proposed regulation? Maybe it’s a bit of both? Clancy Yeates discusses in the Sydney Morning Herald. We asked a guest commentator for their take on Ethics in finance after reading the SMH article above. They said sure – as long as we attributed it to a person called “Age Old Wisdom”. We don't necessarily agree with this piece, but it did get us thinking and we wondered what you might think? So here is what they said… 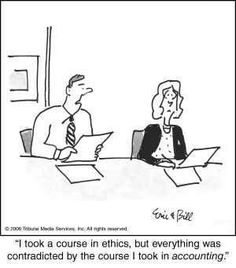 Ethics in finance can be a mine field for some – it’s about “where do you draw the line?” When it comes to making money, the comments of the former Chief of Citigroup Chuck Prince III during the GFC come to mind –  “as long as the music is playing, you’ve got to get up and dance”. It’s a bit like the heroin dealer’s lament – If I don’t sell it to him, he’ll just get it from someone else…

Ethics... good in theory, a bit like the self-regulation of corporate social responsibility (CSR). But then communism was good in theory, look at how that worked out. When people realise that the electricity has gone off while they’ve been listening to all the Doves and peaceniks joining hands and talking about world peace, they call for the Hawks of realpolitik to get the lights turned back on. Realpolitik (or as some say – real politics) is where moral obligations take a back seat to the current situation we find ourselves in.

When it comes to making money, doing it in a “nice’ way would be good, but doing what your company needs gets the bills paid. Just don't be greedy - or we may face proper regulation. CSR means less regulation and less regulation means less things are illegal. Which means more room to try things (it’s called innovation you commies). This is why our system beat the Soviets and why the Chinese are coming on board now. Do whatever - as long as it’s not illegal – and if it might be illegal, do your cost/benefit analysis and see if you'll make more than you get fined. Jail's for blue collars and mugs luckily!

"Tristan is right - the system is broken. Greed is rewarded to the greediest get promoted to the top and thereby perpetuate the system. If it worked for them why change? Penalties really are laughable compared even to what someone gets for shoplifting. White collar crime pays!"

"We're operating in a broken system. Sadly. I'm talking about the business world. And believe the corporation's obligation to maximise profitability for shareholders as THE PRIMARY OBJECTIVE of its existence is what's wrong with it. Until we can reorder our priorities, I don't believe that ethics will ever become systemically concreted into our business practices, no matter the industry - not unless we legally enforce "doing the right thing".. and that's never worked, not in theory or practice. I believe strongly that every business, and in particular small businesses, should have enshrined in their constitution a PRIMARY OBJECTIVE which reflects the ethics it attempts to operate by. Purely for example: Priority 1: Increase the wellbeing of Australians aged XX - YY by providing quality financial advice. Priority 2: Do so profitably, in order to remain financially sustainable and to reward the shareholders for their efforts. No-one, when being authentic to themselves, can genuinely say that they exist to make money as their no.1 priority. Our businesses are an extension of our selves and of our collaboration and of our purpose, so they shouldn't be able to claim lunatic and pretend like their number one goal is to make money. Does anyone agree?"