Hume Confirms FASEA Deadline Should Be Extended This Week

Senator Jane Hume has confirmed that the legislation to extend FASEA deadlines for exam completion for all registered advisers should be passed in this week’s sitting of Parliament. This needs to happen as our analysis indicates around 16,000+ advisers still need to sit and pass this exam in order to keep practising. At present the pass rate stands at about 85% which means potentially thousands of advisers may need to sit the exam more than once.

The industry awaits a decision on whether to extend FASEA deadlines for exam completion for all registered advisers (currently end 2020) and achievement of minimum educational standards (currently end 2024). Senator Jane Hume has confirmed that this legislation should be passed in this week’s sitting of Parliament. The draft legislation, already passed in the House of Representatives, has been listed as “non- controversial”, meaning both sides of politics agree it should pass.

Despite the FASEA extension legislation being generally supported by both the Government and the Labor Opposition, it is part of an omnibus bill which also includes arrangements around listed investment companies (LICs). Though the bill passed in the Lower House, the opposition attempted to amend some legislation not relating to the FASEA extension. Labor has signalled it would continue to pursue amendments to the bill in the Senate. This action could further stall the bill's passage and with it the FASEA extension.

The lack of certainty on the exam deadline has created substantial angst amongst advisers and licensees. As can be seen in our chart below, according to FASEA - 7,488 advisers have sat the exam and 86% or 6,408 passed over the last 11 months. The last exams were in February 2020 and those scheduled for April were cancelled. Pass rates have dropped consistently since the first exam, possibly because the most motivated and proactive engaged early on. 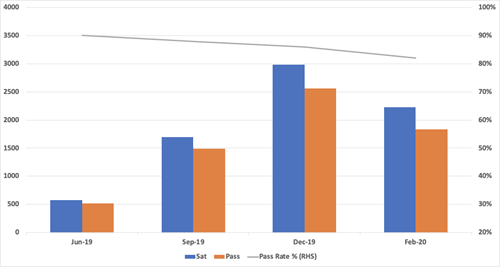 Another 16,000+ advisers still must sit the exam. Allowing for an average 15% failure rate on their first attempt, 2,400 advisers will require two attempts to pass. The four previous sittings have averaged 1,500 advisers each. Assuming the extension legislation is passed, there are likely to be another 8-10 exam sittings by end 2021. Even then, that would represent 1,800-2,000 advisers for each exam, representing a 20-30% increase per sitting.

At least the next exam sitting in June will be held remotely.

Conducting exams remotely eliminates the inconvenience of travel and, arguably, should allow for substantially higher participation rates. But right now, with the imminent passage of the legislation gifting advisers another 12 months of breathing space, compounded by the intensity of supporting clients through the pandemic, we are probably going to see a drop-off in participation rates for a while.

Anecdotally, advisers are frustrated by the lack of feedback from FASEA on their performance where they have not passed. Guidance is reportedly generic and does not help advisers know where to focus their re-learning efforts. The apparent ease of completing the exam on-line may also not be as straightforward as it first seems. There are specific conditions that advisers must meet to ensure they are appropriately “supervised”, including downloading proctor software and installing mirrors to show the proctor what is around the adviser’s computer. And for some, the vagaries of internet connectivity mean that technical disruptions of more than 30 minutes require the session to be rescheduled.

The impending deadline to complete the FASEA exam is a factor for advisers thinking about whether to remain in the industry. The difficulties of studying for exams while running an advice business has been compounded by the intensity of inquiry and client hand-holding at the moment from COVID-19. Interestingly, the academic qualifications and FASEA educational pathway requirements of advisers leaving the industry versus staying are largely the same. We have reported on this previously and little has changed, suggesting that the hype surrounding the FASEA educational requirements driving advisers out of the industry is overblown. Having said that, with this huge bottleneck looming to complete the exam before the end of 2020 the expected extension should see a collective sigh of relief from advisers who currently have several priorities to work through.

"Instead of worrying about a bloody extension just sit the exam and get it over with. It is one exam covering things we do everyday. Another year is not going to make any difference. A day or two for reading over exam topics then sit the exam the following day. Job done. If advisers doubt their own ability to pass one exam they should be looking for a new vocation. They certainly should not be providing financial advice. There should also be a one resit limit."

"well, im old, i passed the exam. some of you guys should go write some business, do your 10 appointments a week, put your energy into helping your clients. now im wasting time on this."

"Agree with Perplexed. Let's cease the carping and move on. If an adviser fails the exam twice, well, there's clearly a bigger issue present. "

"I agree with Perplexed. What is concerning is that the failure rate is still around 15% and rising."

"If you have been a practicing advisor for a while you shouldn't really need to "study" for the exam at all as your CPD would have reasonably covered it all. As such, I can't really see why any practicing advisors would need to allow much more time for it other than attending the exam itself and perhaps an hour or two brushing up on topical areas you might feel week in. I mean really, between degrees, diplomas, CPD over the years and professional designation studies many planners will have studied much of the content 3-4 times already. "

"HI Deputy, it's tough out here in the real world isn't it. If 10 or 20% of advisers fail to pass the exam by the deadline, I reckon many advisers who have passed like me will definitely benefit. No pass - no practise. Did you miss that memo? I feel sorry for the clients who will be adviser less, but hopefully some advisers will be organised enough to refer their clients on if they are no longer licensed to service them."

"In the stockbroking sector, and way over 65, I have no intention of doing an ethics exam … I will retire. Yes I did a degree and the SIA's post grad diploma but they are judged to be too old. I introduced many clients to SMSF and have lectured to U3A groups on super. This real life experience is totally unrecognised"

"Just reading the comment by "too bad so sad". Well, aren't you a clever boy! I bet you've got a degree or two to go with it, and will have another one by 2026. Good luck mate, because all of the education in the world won't make you a better adviser or give you a better attitude towards other advisers. If you think that passing the exam before some of us slower ones will somehow advantage you then think again. "

"Reading the comments in the ifa piece could be summed up as 'advisers blame labour for their own ineptness'. Labour didn't implement FASEA did they? Mugs. It will be sad if the extension isn't passed but there will be more sitting weeks for parliament to pass an extension to the coalitions regulation before the end of the year. Fear not liberal stooges!"

"If advisers got their $#!¥ together and did the exam sometime in the last 12 months it wouldn't matter whether the Fasea deadline was extended or not. Advisers like me who have already sat and passed the exam will hopefully benefit from those who have put it off. The exam must be passed. No amount of prevarication will save you. Just do it."

"Correct: Labor are currently planning a non related Amendment to the Bill which has the potential to delay the process yet again. The AFA are desperately attempting to appeal to Labor to desist in pursuing this Amendment until after the extension to the FASEA exam time frame is passed. Whilst Minister Hume may want this to pass, I am unsure as to whether she will have any control or influence over what Labor will put in it's path. This is most unfortunate in the current environment and just extends the anxiety and delay in relation to a reasonable and fair request. "

"The content of this post contradicts the message from IFA Magazine which referred to statements made by the AFA, in that it's unlikely the bill would be passed: https://www.ifa.com.au/news/27963-take-action-immediately-on-fasea-bill-afa"