How Will Advisers Be Policed In The Future?

The government has put forward a plan for fewer regulatory and oversight bodies in a bid to increase access to affordable, quality advice. There have also been several concessions for advisers who are yet to pass the exam. But there are unanswered questions about how compliance and professional obligations will be monitored.

The future of regulation and professional standards is set for a bit of a shakeup, with FASEA scheduled for dissolution and ASIC’s powers to be extended. What this will mean for advisers remains to be seen, as the details of who manages what are ironed out.

Late last month, a bill was put to parliament in response to the Hayne Royal Commission’s recommendation for a single disciplinary body for financial advisers. It proposed ASIC’s Financial Services and Credit Panel be expanded to police advisers, even those with less serious misconduct. It also put forward stronger penalties for Corporations Act breaches, beyond banning an adviser.

“While sanctions are available to ASIC, the lack of less serious sanctions means that ASIC generally only focuses on the most serious incidents,” Minister for Homelessness, Social and Community Housing Michael Sukkar said when introducing the bill.

In response, CPA Australia has expressed concerns ASIC could be “swamped” with minor matters that wouldn’t materially affect client outcomes.

In further streamlining efforts, FASEA’s current functions are set to be divided between Treasury and ASIC, with Treasury to oversee standards and ASIC to administer the exam.

The Government says it will pave the way for more affordable, quality advice, as it cuts the number of bodies involved in the oversight and regulation of advisers.

While the wind up of FASEA has been largely welcomed by industry associations, the proposed reforms have prompted questions about who will be responsible for setting and enforcing professional standards and CPD.

The Financial Services Council said “new spread of responsibilities between licensees and advisers should be clarified over time” in a submission to the inquiry, while CPA Australia sought more information about who would monitor standards.

“While we note that the standard setting powers will sit with the Minister, it is not clear who will perform the work of maintaining the existing FASEA standards and Code of Ethics, ensuring they remain current and fit for purpose, and developing any new standards that may be set by the Minister,” Dr Gary Pflugrath, CPA executive general manager said in a submission to the Senate Economics Committee.

Meanwhile, the SMSF Association called for an “urgent review” of the CPD framework and guidelines, especially around the technical components.

The Financial Planning Association said the move to a single disciplinary body opens a new opportunity for advisers to keep a record of their own CPD completion, which they would submit to ASIC each year.

The FPA also suggested FASEA pass on important documents to the new responsible minister or ASIC, including practice exams, information regarding a remark and examinee responses to questions (but not the questions themselves).

As the baton is about to be passed from FASEA to Treasury and ASIC, a series of concessions have now been made for those who have not successfully made it through the exam.

The Minister for Financial Services Jane Hume gave advisers extra time to pass the hurdle if they’ve had two failed attempts. Those who have taken the exam twice before January 2022 have until the end of September next year to pass.

The exam authority also relaxed the three-month rule, which prevented advisers from re-taking the exam shortly after failing.

“This amendment will allow all candidates who have been unsuccessful at any prior sitting to sit the November exam, which will be offered via Remote Proctoring and at exam venues, subject to COVID protocols,” FASEA said in a written statement.

Recent data from FASEA shows 74 per cent of advisers on the Financial Adviser Register have sat the exam and passed.

However, Adviser Ratings’ analysis indicates a passed exam does not necessarily signal an adviser’s intention to continue practising. We found one in five advisers who departed the industry last quarter had sat and passed the exam. For more, see Adviser Ratings Q2, 2021 Musical Chairs Report. 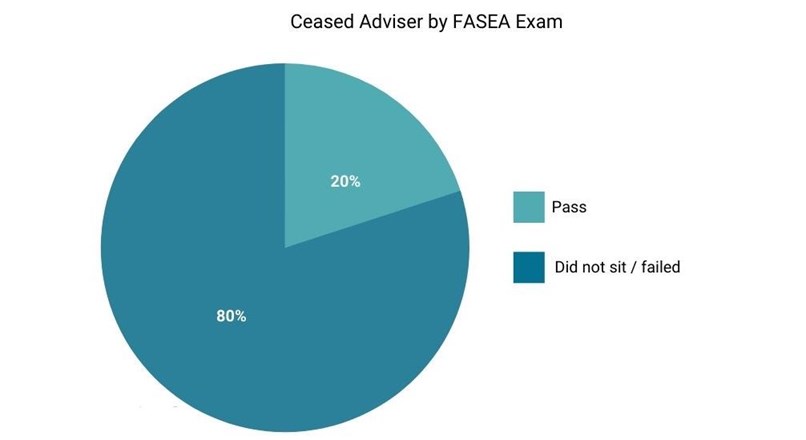 "I agree with you Warren (for the most part). Whilst I am very much in favour of education, so much of what has come out the RC is not going to benefit clients, as it is going to make advice un-affordable for so very many. With fewer advisers, and higher costs, how can that do anything but increase costs to clients. Top that off with the hefty Increase in Advice Practice and Adviser Fees and you have rising costs that can only be passed on to consumers. And then AMP comes up with the following (from Money Management News 27/7) "When asked whether the increase would flow on to retail clients, AMP chief executive, Scott Hartley, said “absolutely not”. Really? so perhaps Mr Lawler doesn't understand how a business runs - all business owners calculate their costs and use those costs to set their prices. Lets make it clear, we are not a charity, Advisers are running a business, and MUST pass cost increases on to clients or they would not be running a sensible practice."

"Warren and Chris, i agree with you both 100%. The cost of doing business is increasing - ASIC fee jumped 30% recently. The time it takes to do business to cover our (Adviser's but) for the pricing we are 'dictated' to charge from some guy who has never practiced in the real world is not worth it sometimes. ...and therefore the little guys (low balance, lower socio economic) people can't get any advice...and they really need it. Govt and bodies putting into place 'mandates' of what we 'caring, and integrity' Advisers have always done, just complicates our and the clients strategies. Never once i have had a client in 15 years ask to see my credentials, proof of my qualifications, business search, compliance style paperwork...not once with over 270 current or ex-clients. People like to deal with local people face to face, they buy the person and their integrity, not the big faceless corp's."

"Advisers are not the problem. Period! Banks, industry superfunds and credit providers are the problem. AFCA's recent complaints statistics prove that! When ASIC and THIS Government (namely the Treasurer and Senator Hume, who have very clear conflicts of interests in my opinion - maybe not now but for the future) finally stop focusing on the windscreen scratches and start focusing on the bigger picture, which is that this industry is spiralling out of control now as a result of their interference, not what financial advisers have done, that will be the day that this industry begins healing. All this fluff about what's in the best interests of consumers has been nothing but exactly that – fluff! It's never been about consumer outcomes. Massive insurance premium increases and unforeseen policy lapse rates also prove that. The fact that they've also made being an advisor that bloody difficult, that over 10,000 have up and left the industry, also supports my belief here that it was never about consumer outcomes. The last 5 to 6 years have been about nothing but setting up an industry for the banks and industry superfunds to come back in to rape and pillage Australian consumers' pockets like never before. Financial advisers have just been standing in the way. The fact that yet another article appears here today talking about compliance and regulation is just laughable."

"Looks exactly the same as the strategy for the vaccine rollout - confused. "

"The super funds are actively pushing for increased scope of intra fund advice. This is in keeping with what Josh Frydenberg (ex bank director) and Jane Hume (ex Australian Super policy adviser) wants. Financial advice will soon be the sole realm of large banks and super funds, and independently aligned advisers will be taxed out of business and buried with red-tape. Everything is progressing to the Liberals plan. They represent big business, not small business. "