With our industry population tipped to fall below the 17,000 mark shortly, we looked at how our advice universe compares with a few of our global counterparts. Some of the results are predictable, while others may be surprising.

As calendar year 2021 comes to an end, the financial advice industry is on the cusp of another grim milestone. By early 2022, we expect more than 10,000 advisers will have left in three years.

The departures leave the ratio of advisers to Australians at nearly 1 to 1300. Three years ago, it was 1 to 900.

While we’re not suggesting the whole population needs advice – especially in younger age groups – the sharp change will have ramifications for people who are seeking an adviser’s guidance in the next decade.

Increasingly, advisers are reporting having to turn clients and prospective clients away, even with numbers still well above our forecast nadir of 13,500. With fewer advisers to serve a booming population, it’s inevitable that more Australians will have unmet advice needs before and during their retirement years. 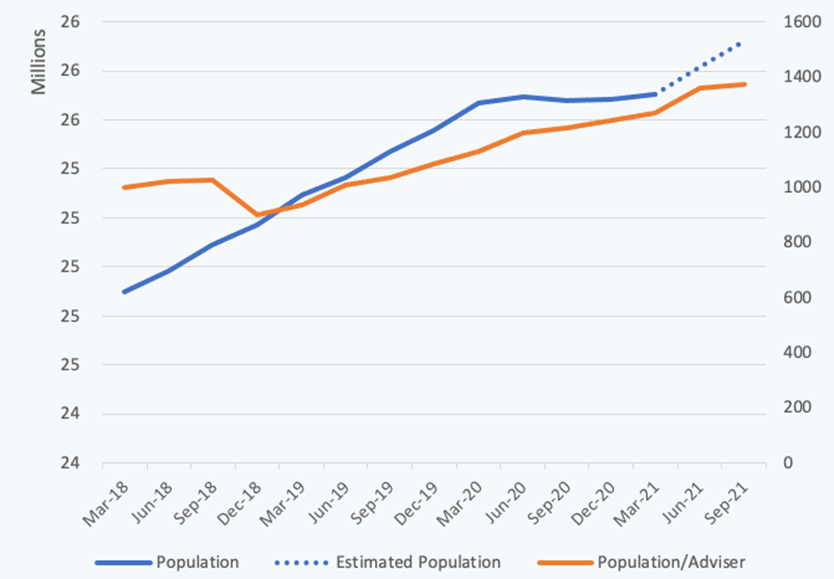 Source: AR Data. Note: Population predictions are based on ABS and UN data but COVID-19 may affect them.

Given this reality, we thought it was worth taking a look at some of our global friends to see how their advice markets are tracking comparatively. For the analysis, we selected New Zealand, the United States and the United Kingdom.

Unsurprisingly, New Zealand has more advisers per person than Australia or some of its bigger global counterparts. Currently, our figures show there is one adviser for just shy of every 500 New Zealanders. In other words, there are more than 10,000 advisers for a population of around 5 million people.

At the other end of the spectrum, the United Kingdom has just 28,000 advisers to serve more than 68 million people. In similar fashion to the Australian experience, the UK’s Retail Distribution Review led to a mass exodus of advisers when professional standards and pricing structure reforms were introduced. Now, there’s one adviser per almost 2500 people.

Figure 2 – How our allies compare: Population per adviser in global markets 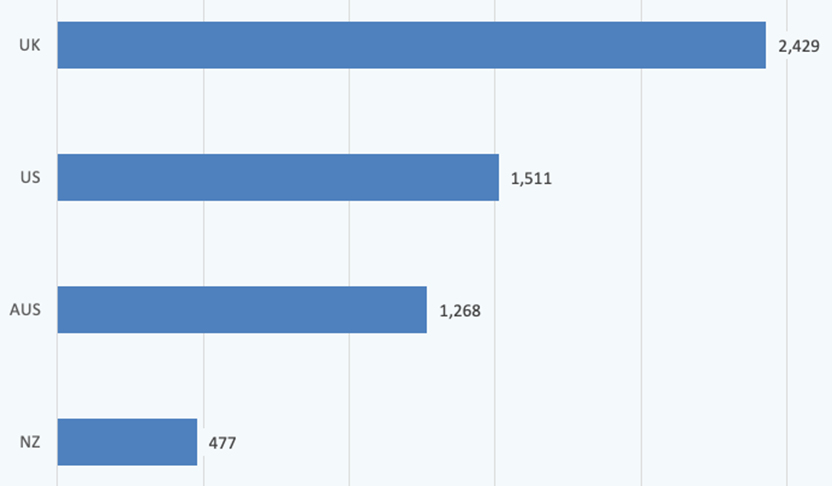 Source: AR Data. Note: Population predictions are based on ABS and UN data but COVID-19 may affect them.

Both Australia and the United States lie somewhere between these extremes, with a single adviser per roughly 1300 and 1500 people, respectively. In Australia, this ratio is continually increasing, with the number of advisers dropping quarterly and the population growing.

In fact, our most recent forecast suggests the number of advisers in Australia will drop below the 16,500 mark by early next year. If this happens, the ratio of advisers to Australians will change to almost 1 to 1500, bringing it into line with the US. Grim times indeed.

For more on the latest adviser numbers, don’t forget to check out the most recent Musical Chairs report.

"Not surprisingly out of the 4 subjects the UK and the US also have the greatest disparity in affluence in their populations. Seems like a relevant correlation to me "

"Its OK folks. The banks will be back, with robo advice and horrible products. Their 10 year strategy to halve the number of self employed advisers will have worked – LIF forced out the risk advisers, "holistic" adviser departures normally associated with scheduled retirement will have been accelerated by FASEA exam, and the one January 2006 diploma bombshell will have finished off the job. The banks will have the resources and size to be able to afford to mentor a whole new stream of new "advisers" to replace the departed self-employed advisers. You really have to ask yourself why it was that CBA, NAB and Macquarie fronted up $11 million in 2015 to provide the initial funding for FASEA, when at the same time their boards were planning a strategic withdrawal of financial advice. Some broom, some sweep! I feel I've been watching a poorly scripted Bond movie. The villain is highly organised, has "sleepers" everywhere, and more importantly, has the support of the government that claims to support small business."

"So by the time the educational qualifications come in we should be at or above the UK population per adviser. Good times ahead for those that can make it through the painful period leading up to this happening."