The popularity of the government’s early access to super scheme has raised eyebrows at the ATO following reports that many of those accessing the scheme may not have been eligible and that large chunks of the cash have been spent on discretionary items. There have been over two million requests to access the scheme with nearly $16 billion withdrawn so far. The ATO has said that it will consider action against all ineligible applicants. It said that individuals who accessed their super funds without meeting the eligibility requirements could face up to $12,000 in penalties for each false and misleading statement.

The popularity of the government’s early access to super scheme has raised eyebrows at the ATO following reports that many of those accessing the scheme may not have been eligible and that large chunks of the cash have been spent on discretionary items. There have been over two million requests to access the scheme with nearly $16 billion withdrawn so far. The ATO has said that it will consider action against all ineligible applicants. It said that individuals who accessed their super funds without meeting the eligibility requirements could face up to $12,000 in penalties for each false and misleading statement.

Access to the first tranche of early withdrawals from Australians super accounts has just one week to go. The government estimated $27 billion would be withdrawn and around 1.5 million Australians would avail themselves to scheme, but over 2 million have already requested for an early release of funds, with nearly $16 billion withdrawn so far, with still a week to go in the initial access period.

According to the federal government’s scheme, only people out of work and facing financial hardships due to the coronavirus pandemic can access up to $20,000 in super and take it out tax-free. The first $10,000 can be taken between April 20 and June 30, 2020, and a further $10,000 will be available between 1 July 2020 and September 24.

The ATO said “Members should carefully check the requirements before applying for access to their super, if the claim is found to be ineligible, they could be lumped with a far higher tax bill. Applicants found to have made a deliberately misleading claim could also be slapped with a $12,000 fine.” Culprits will have the amount withdrawn added to their taxable income, likely claiming back around a third of the withdrawn amount for the government. In instances where applicants can be seen to have deliberately duped the ATO, fines of up to $12,000 may be issued, leaving them worse off than they began.

Billions Gone From Retirement Savings
Adviser Ratings analysis of government and ATO data around the scheme has delivered some interesting results nearing the end of this financial year. Our table is based on the government latest up to June 15. 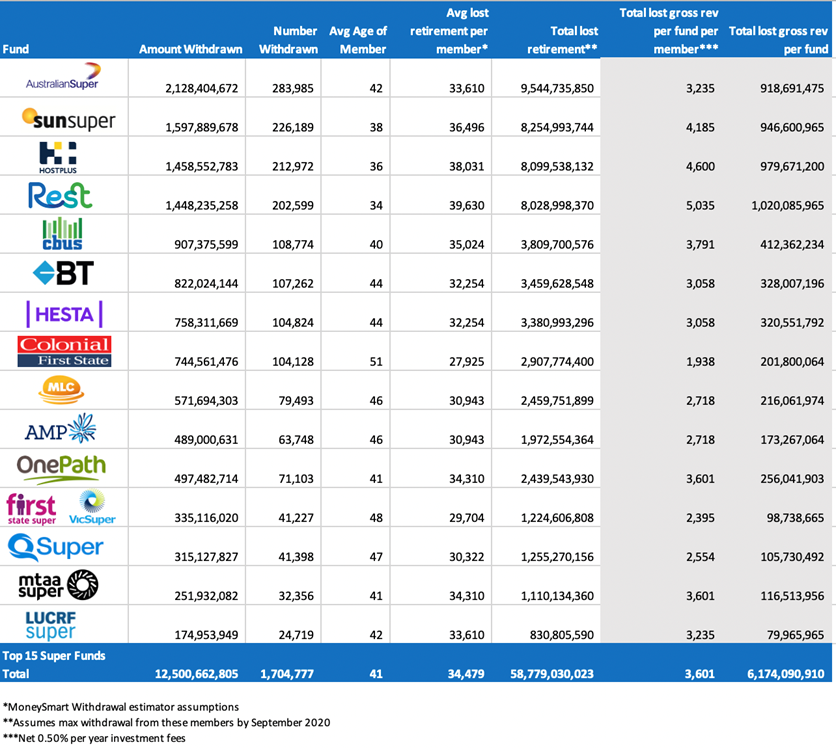 It shows the top 15 funds based on the number of members who have withdrawn cash from their super accounts. AustralianSuper, Sunsuper, Hostplus and Rest have all had over 200,000 members paid out over a billion dollars in total each. These figures will have a sizable effect on many Australians retirement savings. Whilst many Aussies are undoubtedly in need, the stats show for the 15 major funds, nearly $59 billion in retirement savings will be lost from those members withdrawn to date, and $6billion in foregone revenue for these funds over the clients' lives.

Whilst we have taken average members' age with the funds as our assumption for withdrawals, younger members are more likely to withdraw so the figures regarding the impact on retirement savings and foregone revenue is actually very conservative. From 1 July, we will see some of these back at the well for more, but perhaps the younger ones have already tapped out there super funds - Hostplus have a relatively low withdrawal amount of $6,849 – and compounding the issue is the fact that many younger people would also have lost the insurance provided by their super.

There is undoubtedly a need for more Australians to tap financial advisers for guidance, especially around this scheme. Many Advisers could well be acting as the super funds’ saviours right now, by helping to provide alternatives to accessing super now. In spite of the undisputed benefit the release of this cash may give to those in particular need, there are further questions facing the government in the coming months. How long will this benefit last for those continuing to face financial stress in the near term? Will all this extra liquidity and safety net cash contribute to a harder fall if the potential cliff materialises on September 30? And what about those who have already drained the well to survive who will exist solely on JobSeeker and JobKeeper in July to Sept?

The government has yet to commit to a definite windup or extension of its emergency response policies such as JobKeeper just yet. If the Coronavirus pandemic itself hangs around longer than hoped or, worse still, we see some sort of resurgence that requires further or extensive lockdown periods, the government will have to re-calibrate their response. The latest employment numbers were pretty ugly and if employment doesn’t recover soon the question has to be asked “where are we headed?”

"The damage done to the retirement futures of millions of Australians by this shoddy scheme is incalculable. The set up was massively floored from the start and now the ATO says it will fines those (it must be many thousands) who were not really eligible, thereby actually getting a kick to the government coffers! A cynic would suggest this was a deliberate plan by Scummo's government hell bent on scaring money from Australia's most vulnerable. Early access to super is simply user pays writ large instead of the government doing what they're supposed to do. They're responsible for the robo-debt debacle after all. Not to mention blatant pork barrelling with sports roots, gas-led post-covid economic recovery - when any idiot would invest in renewables, and half a billion bucks to extend the war memorial in Canberra. We should not forget the damage this government is doing to this country in its ongoing quest to retain power."