What do advisers think the post-FASEA world will look like? Are they anticipating a relaxation of the standards or an extended timetable for implementation? Will they be more proactive in completing current requirements, or retreat into their shells and hope for some more legislative largesse?

For many advisers, Christmas came early in December when the government announced the disbanding of FASEA, supporting a promising new narrative from Canberra about reducing red tape and lowering the cost of advice. Standards setting, including responsibility for re-evaluating the contentious Standard 3 in the Code of Ethics, will fall to Treasury, while ASIC’s Financial Services and Credit Panel will become the single disciplinary body overseeing operational matters like examinations and enforcement.

The reality is that the industry has to wait for Parliament to endorse this proposed legislation “in the first half of the year” before anything changes. We are feeling a sense of déjà vu here, remembering how this time last year we were kicking around the imminent prospect of legislation to extend the FASEA deadline for exams to January 2022 and the completion of educational qualifications to January 2026. That took another eight months, ultimately passed in August. To be fair, it was a favourable outcome, invariably delayed by a pandemic.

So what do advisers think the post-FASEA world will look like? Are they anticipating a relaxation of the standards or an extended timetable for implementation? Will they be more proactive in completing current requirements, or retreat into their shells and hope for some more legislative largesse? In its caretaker role, will FASEA sit on its hands with feedback from recent industry consultation on the Code, or suspend early initiatives to increase information disclosure and data sharing?

As part of our ongoing Financial Advice Landscape study, we asked advisers when they expected to achieve the January 2026 gold standard of an equivalent tertiary educational standard. The results in Figure 1 were quite startling, with almost two-thirds (63%) of over 1,000 surveyed advisers already meeting the FASEA standard or expecting to be there by the end of next year. This is three years in advance of the official January 2026 deadline and a very encouraging signal for government, regulators, and the industry. 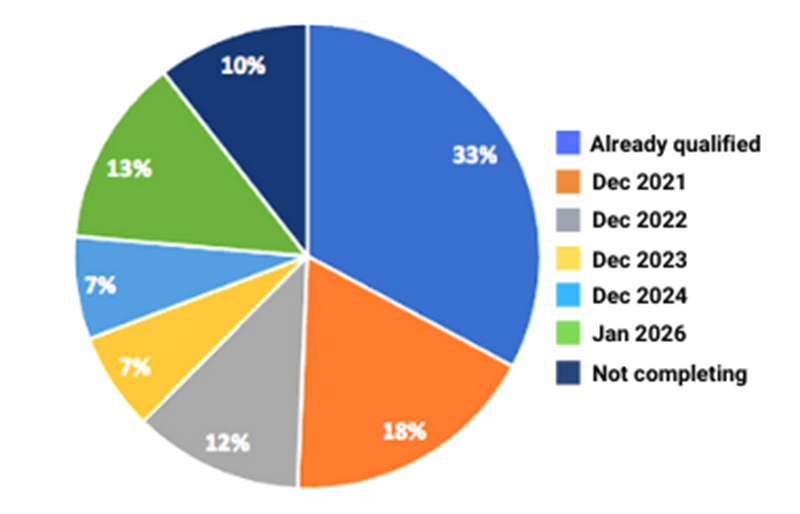 Drilling deeper, we can reveal that three quarters (74%) of the same adviser cohort had either completed the FASEA exam or were currently waiting for their results, compared with 52% across the entire community. Clearly, these survey participants are a motivated bunch with a positive outlook on the future of the advice industry.

Interestingly, another 10% of surveyed advisers do not intend to complete the educational requirements, suggesting that they will exit the industry or switch to non-advisory roles at some point. Depending on when they intend to make those moves, it’s unlikely that they will also complete the exam over the next 12 months, or be necessarily motivated to do their best should they be compelled (by commercial circumstance, or pressure from their licensee or clients) to follow through. By extrapolation, this equates to over 2,000 advisers. Given all that, it won’t surprise if the downward trend in the exam pass rate from Figure 2 continues. 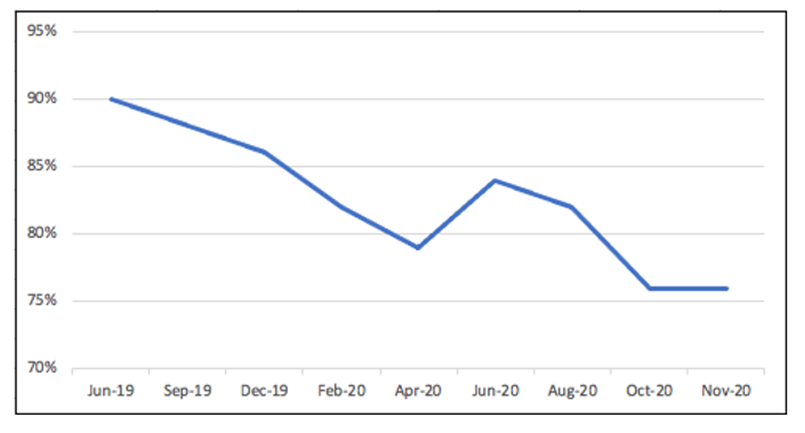 Is completing the exam a badge of honour? Do advisers think this will make a difference in how they are perceived by clients and prospects? On December 18 2020, FASEA launched a new exam register that contains all the names of advisers that have completed the exam. Interestingly, only 70% of the 10,000 qualifying advisers agreed to allow their names to be displayed.

Professionalising the advice industry still has a long way to go, and it was never going to be easy. If you have some strong views on important issues like this, please have your say at www.adviserratings.com.au/yoursay and be in the running to win from the $30,000 prize pool drawn on January 29th.

"I totally agree with Jeremy here, and it is not just Risk advisers that are considering their education options. I would love to have kept going till I'm closer to age 70 because I know I can, but I will be cut short by 5 years because I'm not going to spend upwards of $20,000 (plus Time lost etc) to get a Degree just to stay advising and self-employed with staff for only 2-3 more years. I have been face-to-face advising for 40 years and have only had 1 person ask me my Quals. Just this morning I had a 34-year-old straight up say we have rung you because we don't want a new adviser with almost zero life experience advising us in our life's investment journey. I have known no other employment, so I will be literally thrown out onto the dump, that is not a great way to retire from an industry that I get a real buzz out of alleviating people's concerns about their financial future. Not just educating them about how products work or how the economic situation has affected their Super. We do so much more than what a degree can teach. "

"The initial excitement of FASEA being disbanded, quickly wore off when it was clarified that really nothing has changed around education requirements that still needed to be completed by Advisers. The Government has not reduced red tape, it has moved the red tape. There are many thousands of experienced risk advisers who are still going to exit the Industry by the end of this year and many more over the next 4 years who will not be doing irrelevant studies in areas that has nothing to do with the advice they provide. As usual, the very people who will be impacted the most, will be the vast majority of Australians who need advice and will not be able to get it. What is disturbing, is it all appears to be about adviser numbers, rather than what actual experience the advisers have. Ask any Australian if they would prefer to pay for advice from an experienced adviser, or an inexperienced adviser who has very little practical capability, due to the simple fact that they have not had many years of actually living and breathing all the intricacies of Financial Planning and the answer is nearly always the same. If the many thousands of experienced advisers who have had enough and exited, are replaced with young and enthusiastic, though wet behind the ears, theory based graduates, is this in the best interests of Australia? It is a rhetorical question and considering that the new adviser influx is more of an insipid trickle, the self congratulation club of providing less red tape, currently is more akin to the great series, Utopia. For Life and Disability advice alone, there is a need for a minimum 30,000 risk advisers in Australia. Considering there are only approximately 3000 specialist advisers left, blind freddy can see there is a problem. FASEA created the turmoil. ASIC and Treasury will continue it, which means unless there is substantial change, more advisers will be leaving and the replacements will not be ready to fill the advice gap for many years until they have attained real world experience. The current and future bits of paper being promoted as a cure all, that tells Australians very little of what they can actually achieve from the advice provided, will not solve the issues, it will exacerbate them."