The latest details from APRA regarding the Super early release scheme show that over $33.3 billion dollars has so far been paid out to applicants. There have been 4.5 million applications to the scheme, including initial and repeat applications, with the average payout figure being $7,676. We spoke to some advisers to get their thoughts on the scheme and to see how popular the scheme has been with their clients. Some of their responses may surprise you.

The latest details from APRA regarding the Super early release scheme show that over $33.3 billion dollars has so far been paid out to applicants. There have been 4.5 million applications to the scheme, including initial and repeat applications, with the average payout figure being $7,676. We spoke to some advisers to get their thoughts on the scheme and to see how popular the scheme has been with their clients. Some of their responses may surprise you.

The dashboard below was released by APRA and reveals some of the key statistics about the scheme. 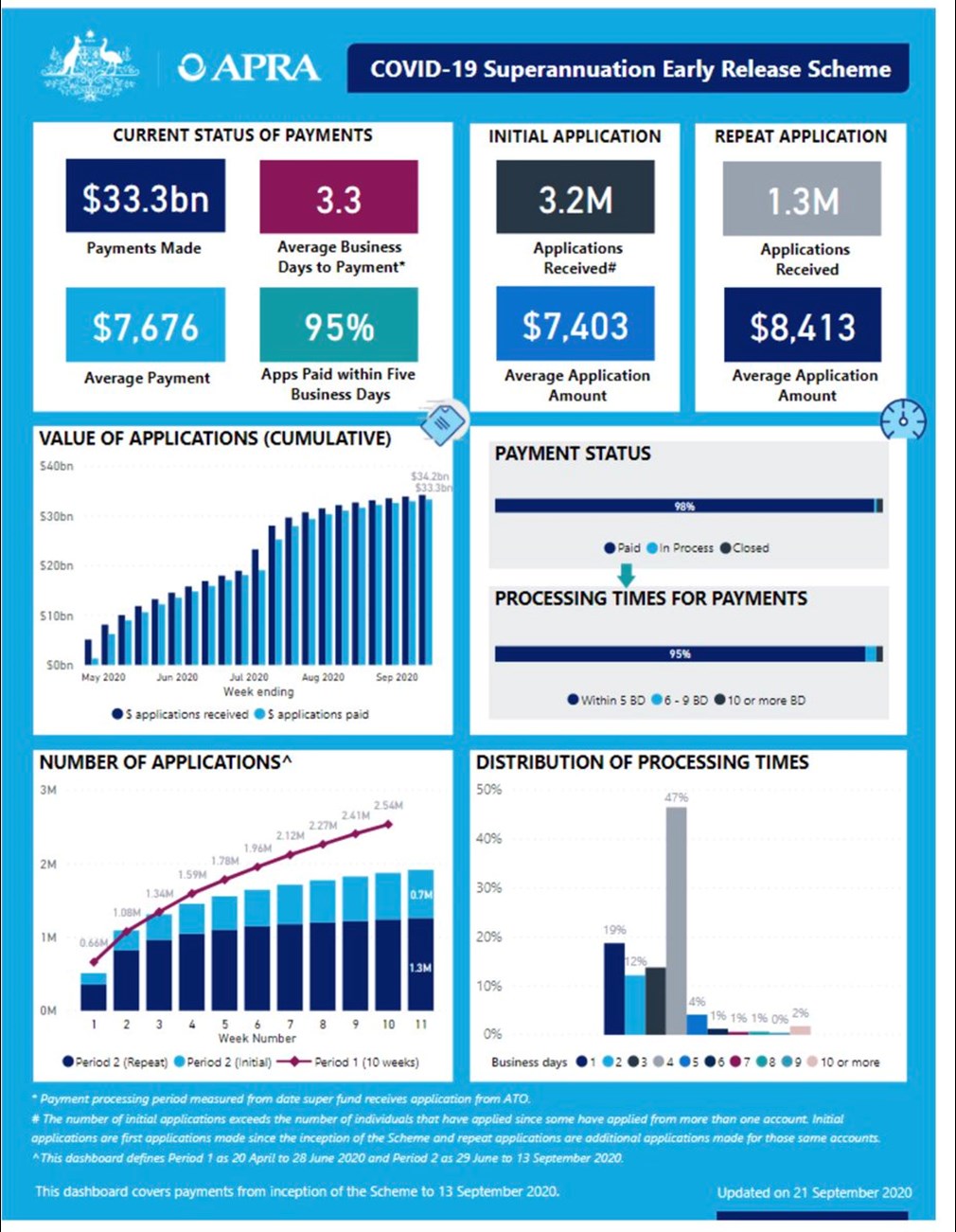 The ten funds with the highest number of applications received from the ATO have made 2.9 million payments worth a total of $21.9 billion. The average payment from these funds was $7,610 with 96% per cent of payments made within five days. The top 3 payouts came from AustralianSuper ($4.51 billion to 587,763 applicants), Sunsuper ($3.21 billion to 442,662 applicants) and the Retail Employees Superannuation Trust ($2.98 billion to 412735 applicants). A total of 7 funds have paid out over a billion dollars as a result of the scheme including MLC super fund ($1.23 billion), Hostplus ($2. 88 billion) and BT Funds Retirement Wrap ($1.57 billion).

In their additional comments, APRA said that 98% of applications were paid and the payments were made within 5 days of the application in the vast majority of cases (95%).

Adviser Ratings contacted some advisers to check in on the popularity or otherwise of the Early Release scheme with their clients. While some advisers had not yet had any enquiries regarding the scheme, there were a number who shared some interesting feedback with us. Many advisers have had clients access the scheme without the adviser’s knowledge. One adviser said they had had just one enquiry from a client, but they had found out later that “numerous” clients had accesses the scheme and they had only become aware when they noticed the super balances had dropped considerably. The clients hadn’t lost any work hours prior to accessing their super. Two of these clients now had less than $300 in their super accounts. On realising this was happening, the adviser notified all their clients that accessing the scheme inappropriately meant individuals could face fines of up to $12,000 and that they should get in touch if it was something being considered.

Other advisers also had instances of their clients accessing the scheme “behind their backs”, and also reported people asking for investment advice for the super they had just received. One said their client had put the money towards a new TV and new car while another said that their client had inquired about it because someone at their place of work had done it, and because the application process was so easy, everyone at the workplace started doing it.

Unfortunately, many advisers had first-hand knowledge, or heard stories of mortgage brokers and “property spruikers” encouraging people to use their super to buy property. One client had $20k saved for a deposit and was told by a mortgage broker to access their super twice to get their deposit up to $40k. When the adviser asked if they had any reduction in their working hours, the reply was “no - they’ve gone up actually”. It begs the question; will anyone be fined for inappropriately access their super using this scheme? ATO officials have told a senate inquiry that people who have inappropriately accessed super could be taxed on withdrawals or face penalties of up to $12,600 for misleading statements. While there have been reports that the ATO is auditing members who accessed early withdrawals, we’re unaware of any fines that have been issued.

Most advisers seemed to agree that the idea of accessing super in extreme situations was a reasonable one, but that the scheme was rushed out, and could have definitely benefited from better implementation, in particular with more scrutiny of applicants and a better process in dealing with applications. With literally millions of people accessing the scheme, even if a tiny percentage of applicants were found to have acted inappropriately, the fines could total tens, if not hundreds of millions of dollars. But as one adviser put it – the threats on this from the tax office are just threats to try to discourage people from doing the wrong thing. “If they started fining people, they would end up having to fine thousands of people and it would cost the government even more money to achieve. In these times, they’ve got better things to spend their money on than fining people for accessing their own money”.

I guess we’ll have to wait and see.