Demand Rises and Supply Falls In A Cracking Quarter Of Change

It was another cracking quarter, dominated by global events, major regulatory updates, and ongoing corporate actions. With a new year bringing more musical chairs for advisers and practices, we see the adviser population shrink by another 431, pushing numbers below 21,000

A new year, and another year of musical chairs for advisers and practices. As the old saying goes: “the grass is greener on the other side”.

It was another cracking quarter, dominated by global events, major regulatory updates, and ongoing corporate actions. Along the way, the adviser population shrunk by another 431, pushing numbers below 21,000 as shown in Figure 1. Promisingly, adviser exits have definitely slowed - this was the second lowest quarterly decline since the industry started net contraction in 2018 following a similar result in Q3 2020. In fact, total adviser movements for the quarter was the lowest in more than two years, with subdued results for both exits and switches. Are advisers simply taking a breather after a tumultuous 2020, or will we see a return to the relentless pace of 2019 / H1 2020? 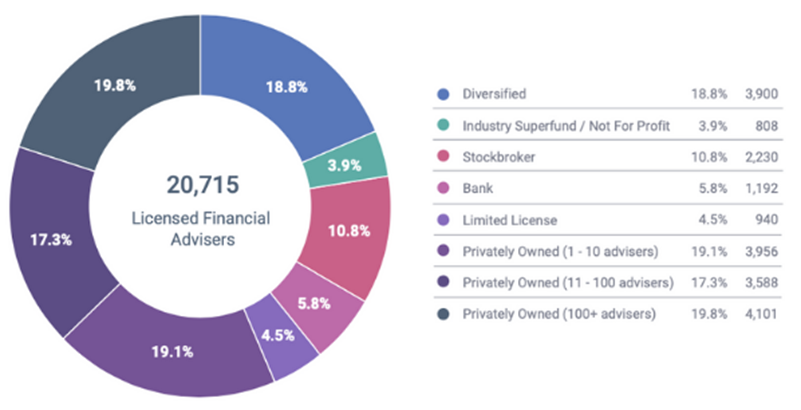 What happened in the last three months that defined our world? Australia recovered from COVID-19 to a “new normal” of daily activity, although flare-ups like Sydney’s recent northern beaches cluster and ongoing movement restrictions between states are constant reminders of the pervasive influence of the virus. By extension, our economy and business, in general, is slowly improving, although patchy and fragile.

It was also a busy period for government and regulators. FASEA was put on life support, however, this proposal still requires passage through Parliament and may not be actioned until mid-2021 depending on legislative priorities, perpetuating industry uncertainty about the likelihood of restrictive covenants within the code of ethics being relaxed. ASIC provided further clarity on key structural changes around scaled advice and product distribution respectively. And last rites were performed for grandfathered commissions.

Corporate actions continued at an unrelenting pace across the wealth industry and provided more evidence to support the notion that vertical integration is not a poisoned chalice for corporates or regulators. The two biggest advice players were both in action during the quarter, with US fund manager Ares Management Corp lobbing a $6b non-binding takeover offer for AMP in October while IOOF announced $1.3b of net outflows from its advice business, highlighting how there is plenty more water to flow under the bridge before that major acquisition is settled.

With the continued shrinking of the total adviser pool and plenty of real-life examples of businesses collapsing and increased mental health pressures including extreme cases of suicide, it is easy to be gloomy about prospects for the industry.

However, results from two surveys run by Adviser Ratings over the last two months brings some hope and identify a core of advisers that are excited and motivated about what the future brings. They are completing their exams and tertiary qualifications well in advance of peers and regulatory deadlines. And they report plans to grow their customer books and take on more advisers into their businesses. Anecdotally, consumer demand is also increasing, fuelled by a combination of financial stress from COVID-19, improved awareness from the government’s early access to super program, and through a greater variety of channels offering help, including expanding super fund advice programs and the emerging digital finance tools sector. As we have said before, an imbalance between demand and supply augers well for financial advisers who choose to stay.

In Q4 2020, 511 advisers (9.7% annualised) switched licensees according to Figure 2, which was comfortably the lowest rate seen in the last two years. The major adviser purges from AMP and ANZ from earlier in 2020 have potentially flared out, although we anticipate seeing more IOOF-MLC departures in Q1 2021 as negotiations on stay versus go are concluded.

Our latest survey of over 500 practice owners indicated continued strong interest in switching, although we know intent does not always translate into action.  When advisers finally get serious about making the move, many are daunted by the actual effort involved or don’t know who to trust for advice.

This is an abridged extract from our latest Q4 2020 Musical Chairs report that you can access here.

"@Marty - what 'compliance nightmare'? Any adviser on the FAR that hasn't passed the FASEA exam by the time the final batch of exams (9 Nov) have been marked will be removed from the FAR after 31/12/2021 and will therefore no longer be a registered financial adviser. Checking the FAR to see if an adviser is registered is hardly rocket science. The clients of de-registered (former) advisers will need to be moved to a currently registered adviser, exactly the same way as happens every day when an existing adviser becomes unregistered due to retirement or changing careers. IMHO some financial advice 'professionals' need to stop whining about educational requirements and the FASEA exam and get with the program (or get out). Nay-saying the need for the FASEA exam is hardly in line with Standard 12: "you MUST uphold and PROMOTE the ethical standards of the profession""

"I wouldn't be surprised to see a massive acceleration in departures through the middle of this year once Jobkeeper ends. There will be a lot of firms getting Jobkeeper at present. I also suspect that there will be many younger and fully qualified advisers that have other career choices leaving the industry as well - it's just not as attractive as it used to be on so many fronts. From speaking with people - fatigue is setting in - and many people will make the move when the full financial impact of the loss of their grandfathered commissions starts to fully bite once jobkeeper rolls off. I am betting on lots of M&A from Q2 onwards."

"Justine, to your point about the age distribution of the exam "completers" versus the "hold-backs", we will draw any differences out in future analysis. One would expect older advisers to be in the latter group, but that may not be the case. In the same way that people leaving the industry over the last two years haven't necessarily had materially lower average academic qualifications than those who have stayed (who in many cases still need to complete bridge courses or degrees). "

"Marty I reckon by June we will have a really clear idea of what's going to happen with numbers for advisers...surely those planning on sticking it out would want to give themselves an opportunity for a do over if they don't do well in the exam? I think we will be in a for a huge drop off at the end of this year. IMHO at least 10% probably at least 15%...it would be good if we could see what the demographics of those who have completed V those who have not to see ages of advisers, cant help but think heaps will be hanging up their boots on Dec 31!"

"Projections would suggest at least another 10% or more advisers will leave prior 01/01/2022. In fact the December 2021 quarter will probably see the largest single decline as many advisers are yet to sit and pass the FASEA exam and may well have already decided they will not sit the exam and will simply exit on 31/12/2021. The FASEA exam really should be abolished as failure to do so may cause a significant compliance nightmare for many advisers and licensee's who remain when the music stops. Not to mention the many platforms with newly orphaned clients. "