Adviser Ratings analysis shows the end of the year saw a massive increase in the number of advisers joining licensees, as they scrambled to beat the Financial Adviser Standards and Ethics Authority (FASEA) education requirement deadline.

The end of the year saw a massive increase in the number of advisers joining licensees, as they scrambled to beat the Financial Adviser Standards and Ethics Authority (FASEA) education requirement deadline that applies to new advisers entering the industry from January 1 this year. The spike saw more than half of the entire years’ worth of new adviser authorisations come in November and December. While 8,883 new advisers jumped on board in 2018, nearly 40% were registered in December alone. More than half of this acceleration in numbers was absorbed by just 50 licensees. 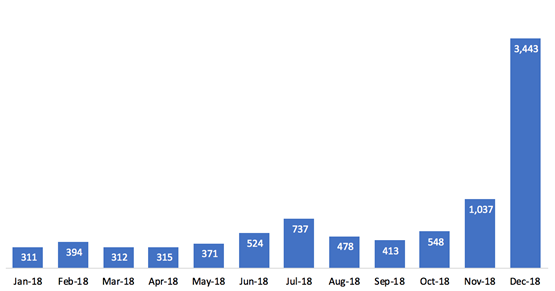 This chart shows the numbers of new advisers taken on by licensees for each month of 2018, and the massive increase in numbers at the end of the year.

New regulatory requirements came into play on January 1st this year that stipulate new advisers have to have completed a bachelor or higher degree, or equivalent qualification, approved by the standards body. Existing advisers (those registered prior to January 1, will still have to achieve the qualifications, but have a further 5 years – till January 1, 2024, to meet the standards.

Whilst a total of 8,843 new advisers joined in 2018, overcoming the initial regulatory hurdle, the rush for the exit is already happening with 6,014 advisers leaving the industry in the last 12 months (close to 25% of the 25,000 that were operating at the start of the year). This left a net increase of 2,869, meaning there are about 10% more advisers now, than at the same time last year.

Adviser Ratings analysis of adviser movement data showed that 4,480 new advisers joined licensees in November and December. This included a rush by accountants to join the two specialist accounting licensees, the SMSF adviser network and Merit Wealth who took on an additional 361 advisers between them, growing the total number of advisers they license 23% and 25% respectively, in December alone.

Other licensees who took on large numbers of adviser in December were Commonwealth Financial Planning (84 Advisers), NAB (70), ANZ (66), La Verne Capital (61) and GWM (58).

The announcement states that under the policy the maximum requirement for a new entrant will be an approved bachelor degree of 24 subjects (units) and for an existing adviser will be a graduate diploma of 8 subjects. Degrees include single units of study with approximately 120 hours of learning required, as per the AQF (eg. 8 course Graduate Diploma and 24 course Degree).

"Ok, net inflow of advisers so far. However, licensees are budgeting for a reduction of around 1/3 by December 2023 (around 8000 advisers will exit ). So thank you very much Fasea, cost of advice is rising, you have ignored our technical knowledge that no degree will teach, and you have made honest and hardworking advisers who have done nothing wrong take the fall for the actions of others. As if having a degree will improve ethics- how naive! I will stand corrected but the head honchos who have fallen on their swords as a result of the Royal Commission were all degree qualified, some with advanced degrees. And you're making us take an ethics exam on top of post-graduate studies! Well I am exiting the industry I have been in since 1998. Ive never had a complaint, have always looked after my clients ( I have lost 15 clients in total since 1998, 11 passed away, 2 have moved overseas), and I receive referrals from clients. Ive done many pro-bono plans for people who were desparate, and yet I have to now justify myself to some BS board in order to stay in the industry. So I've made my choice and am selling my practice and Fasea can get stuffed. "

"@ Jason - according to this article accountants joining the two specialist accounting licensee totalled 361 in december - leaving well over 3000 new authorisations. The monthly average looks to be about 400 - so I don't think you can say it is all accountants"

"@ John J and Typical, These are accountants providing advice in the SMSF space registering and not Financial Advisers. Prior to 2016 +/- an accountant could provide you with a recommendation to set up a SMSF on the back of beer coaster and give consumers all the protections such documents would provide. These individuals are now required to be liccensed and have a licensed restricted to SMSF advice and they cannot take into account investments outside super or make a product recommendation. It's a limited license. These numbers reflect 1) accountants finally being registered or 2) junior staff in advice firms. As the article mentioned it is largely accountants. This is not financial advisers "leaving it till the last minute" and being registered, it's accountants who feel they are above the law finally being registered to avoid having the requirement to have a Bachelor of Financial Planning and the new education standards. The numbers of advisers leaving the industry are still rightly justified. "

"That seems quite extraordinary! Dodgy even. squashing in all those advisers just before the cut off. Doesn't send a positive message to the public. "

"Wondering if ASIC would be paying any interest to many of the advisers who seem to have been rushed through at the end of the year?"

"All the industry mail was that the FASEA changes would decimate adviser numbers - yet according to this we have 10% more advisers that at this time last year. Scaremongering much?"

"Good to see advisers are so organised that they leave it to the last minute!"