In these times of industry disruption and change, there is plenty for advisers to think about if they are contemplating changing licensee or even becoming self licensed. Basic things, like how you might want to structure your remuneration are obvious, but there are also considerations that come with running your own business that advisers without this experience would do well to not underestimate.

Most financial advisers in Australia are moving away from being licensed by institutionally or aligned entities. The alternative; being self-licensed or being licensed by a privately-owned licensee is the preferred option for a growing majority of advisers. In these times of industry disruption and change, there is plenty for advisers to think about if they are contemplating going down this path. Basic things, like how you might want to structure your remuneration are obvious, but there are also considerations that come with running your own business that advisers without this experience would do well to not underestimate.

There has been much debate around the industry about how advisers and licensees will generate revenue, given the legislative and cultural changes that we’re currently enduring. What a successful business model will look like in 2-5 years’ time is still to be settled. Removal of commissions and increasing compliance are forcing these changes and the upshot is advisers and licensees alike are having to improvise and rejuvenate their business models to remain relevant. Currently advisers are paying an average of between $40-$50,000 to their licensee, which in turn operates on relatively thin margins for the services they provide.

The new CEO of IOOF, Renato Mota, said recently that advice businesses will have to move to new commercial model which accommodates the reality that the days of “subsidised” advice will not work in the future.

“That model simply will not work in the future” he said. “We are going to have to build a model based on advice and the value of that advice.” He believed that the intricacies of how this would actually work would become more obvious as the self-employed licensee model continued to evolve.

Rob jones, MD of Peloton Partners told Professional Planner that like advisers, licensees will need to start freeing themselves from revenue-sharing arrangements and will likely move towards revenues generated by fees paid by advice businesses.

Angus Benbow - the CEO Centrepoint Alliance has begun shifting the business to an entirely fee-for-service model, free from cross subsidisation via a process he’s termed “socialisation”, which involves actually defining what fees are being charged and what services are being offered. It is a massive change, considering an estimated 80 per cent of the company’s revenue was made up of rebates sourced from external providers and margin from in-house product. Speaking of the effect it has on advisers, he said “Absolutely, advisers are under pressure, we will see quite a few advisers from our network go as a result of what we’re doing”.

For adviser themselves, many firms have moved completely to fee for service revenue models, but to achieve a model that is completely “free of conflict” some are arguing that percentage based fees, should also be removed from business models. The chairman of the ADF Financial Services Council, Robert Brown, for one, has argued that percentage-based revenue should be seen as a form of “conflicted remuneration”.

Industry data indicates that many advisers believe self-licensing is one way to achieve sustainability in the current uncertain environment. Our latest data indicates there are 2,231 licensees registered, with 2,152 of these being privately held. The number of these private licensees with one or two advisers stood at 1240, while those with 5 or less advisers numbered 1711 (80%) as at the end of May 2019. 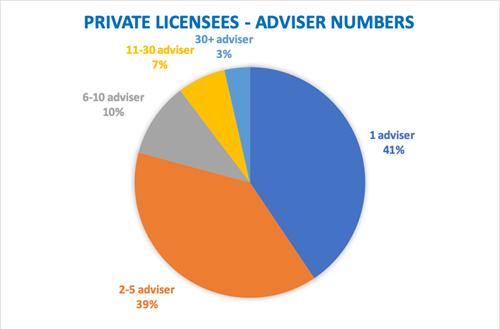 There seems no end to the growth of self-licensing, and many advisers, particularly those thinking about moving from institutions, might consider it an attractive option. But taking on responsibility for your own firm as well as the licensing aspect of your business does not come without its own challenges. Running your own business requires you to act as chief in all roles including HR, Payroll and compliance and when you go from working in an organisation where these are not your major concerns to owning all of these functions, there can be a struggle to devote as much time to clients as you would like. Then throw in all the obligations of a licensee, and self-licensing is not necessarily the attractive option it may appear as at first glance.

It may be that these requirements prove too much for some newly self-licensed advisers, and the ability to be in a small, boutique licensee which offers specialised services with an appropriate fee structure would be more preferable. If such a licensee model comes to fruition, whoever nails it may be a big winner from the current disruption.

"It strikes me as being just like the GFC...the bad eggs that caused the problems get away more or less unscathed (and will probably make a good deal of money for divesting their businesses) with bags full of other people's money, while those of us who are committed to our clients & their outcomes are thrown under the bus with ever increasing stress, higher workload than ever & higher costs outside our control. We are clearly living in "interesting" times. "

"If charging % FUM is a conflicted remuneration then perhaps fund managers and ETF providers shouldn't be charging % FUM and PI insurers would charge a flat fee regardless of FUM. When that happens then I would be happy to oblige. "

"Everything is up the creek now. I long for the days when I could just concentrate on servicing clients without all the rubbish about conflicts and the regulatory burdens that go with it. Advisers are being forced out in droves and it is sad."