For a consumer seeking financial advice for the first time, several factors may come into play when choosing an adviser. One of those factors may be whether they seek an aligned or non-aligned adviser.

For a consumer seeking financial advice for the first time, several factors may come into play when choosing an adviser. One of those factors may be whether they seek an aligned or non-aligned adviser. With headlines in the media about advice and general financial scandals, consumers could be forgiven for seeking out advisers who were not perceived to be associated with one of the offending companies.

It is important to note that the terms aligned, non-aligned and independent have been or are contested. According to Sterling Publishing (owners of ifa, risk adviser and other industry publications) in the broader financial community, what is colloquially known as the non-aligned financial advice sector equates to roughly 20 per cent of the industry or 4-6,000 individual practitioners. This describes financial planners that are self-licensed or licensed by companies not owned by or aligned to the major financial institutions (the big four banks plus AMP, insurance companies and the like). The same site notes that using the Australian Corporations Acts' definition of “independent” (which is far stricter and has more conditions) leaves only 40-100 financial planners legally being able to use the term independent.

Very recently we spoke to an adviser who felt obliged to remove “Independent” from their business name because they had just 2-3 products from one of these large institutions on their Approved Products List (APL) even though they were independent as far as all other criteria were concerned.

Notwithstanding this point, we want to take a brief look at some of the pros and cons that have been raised from various media publications on being an aligned or non-aligned adviser under its colloquially understood definition. 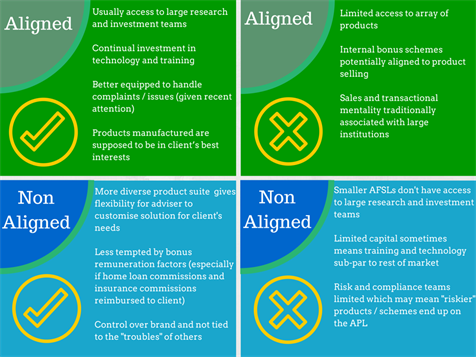 While not an exhaustive list, we sought comment from advisers regarding these points. Jake Ruse, Platinum adviser and MD of Innovative Wealth Management (which is licensed by Charter Financial Planning which is owned by AMP) said “the pros and cons noted are valid but should not be the only determining factors when choosing a financial planner or advisory group.” He noted that “In reality it doesn’t matter whether a financial planner is aligned or non-aligned provided they are working and acting in the best interests of the client”.

“Non-aligned” Platinum adviser Phil Thompson of Rise Financial described himself as “passionate about truly independent financial advice” and argues that “when you remove all potential conflicts of interest, then you have the best environment and structure possible to provide advice that is in the best interest of the client only”. (Thompson’s impassioned reasoning and detailed reply to our points can be read here)

So both advisers agree that the key point is making sure advisers are working in the best interests of the client. This is the nub of the matter and the aspect that the “best interest” clause in Fofa attempts to set in stone.

The ways to achieve this are where the debate can get controversial.  Mr Ruse noted that “when seeking financial advisory services (aligned or non-aligned), one should conduct appropriate research on their financial planner, vet their qualifications, seek testimonials and check for any conflicts of interest.” This sound advice puts part of the onus onto the consumer to vet the adviser. Mr Thompson argues that structurally removing all conflicts of interest (and reasons that potential for conflict is higher in some aspects with aligned advisers) is the only way to deliver the best interest outcome. This puts the onus on the industry to structurally negate potential conflicts and see that they are minimised as much as possible.

It should be noted that whether an adviser is considered aligned or non-aligned does not in itself guarantee that advice will be in the best interests of the client and that the alignment discussions are just one aspect of the best interest debate.

In our next edition we’ll look further into alignment and ask what role compliance, higher education and culture play in attempting to get the best interests of consumers served.

Aligned or Non-aligned? Have your say below....

"I have no beef with the above comments. Just to add: Large Licensees have the financial capacity to rectify adviser misbehaviour quickly for the client from their own resources, and then seek recovery from the adviser (PI and/or cash and/or employment insecurity). Some large licensees are good at this, some not so good, but even they are being made to realise their responsibility and I expect improvement. My point is that some clients see a large Licensee as a plus for their own security."

"Most advisers work within a vertically integrated business model and are therefore incentivised in some way by product distribution. Vertically Integrated models are not exclusive to aligned AFSL's. These conflicts distort advice. All other things equal, the consumers best chance of getting advice in their best interest is to deal with an adviser whose only source of incentive is from the client."

"I agree, being aligned to a major bank or large insto doesn't in itself dictate the quality of advice. What it does is cast serious doubt. It also introduces the notion of systemic failings within the financial planning community because when something goes wrong it happens on such a scale, dare I say, a Commonwealth Bank scale, it leaves us all tarred with the same brush. It's an easy fix. ASIC just needs to say the following to the banks and major insto's "you need to decide whether you make products or sell products, you can't do both." "Dealing with peoples' life savings is too important to be clouded in a haze of potential conflicted interests which are unavoidable when you try to do both". Fix this and you haven't solved everything, but you have made giant strides to eliminate much of what's wrong, and the industry can finally get itself on the right path."

"Best interests is just a term that has been thrown to make the masses feel better. It's PR marketing speak for the industry. Aligned or not - what is the definition of best interest and how would you prove it if push came to shove in court. If an adviser insisted he believe he acted in the best interests of a client he would have to be monumentally hopeless to get caught out otherwise."

"It isn't fair to say that an aligned licensee has limited access to an array of products. Larger institutions benefit from their sheer size - they can offer an extremely wide array of products that will suit virtually every investment need because they or so big."