ASIC To Focus on 50 Licensees?

The regulatory and compliance burden facing growing licensees is perhaps, the X-factor that should not be frivolously dismissed by anyone concerned with the future of the advice industry. With the big guys exiting advice, there will be a renewed focus by ASIC on smaller licensees. Adviser Ratings analysis shows that while there are over 2,200 licensees operating in Australia, around half of all advisers are authorised by just 48 mid to large sized licensees.

The regulatory and compliance burden facing growing licensees is perhaps, the X-factor that should not be frivolously dismissed by anyone concerned with the future of the advice industry. With the big guys exiting advice, there will be a renewed focus by ASIC on smaller licensees. Adviser Ratings analysis shows that while there are over 2,200 licensees operating in Australia, around half of all advisers are authorised by just 48 mid to large sized licensees.

There are a few things to keep in mind regarding where ASIC’s regulatory gaze will fall in the near future. ASIC’s regulatory performance was questioned, and in some cases admonished during the Royal Commission, such that the government has already announced ASIC’s funding will increase. ASIC announced its media friendly “litigate first” strategy, and though it’s initial forays into said litigation have not necessarily gone to plan, it would be prudent to think the strategy will remain in place for the foreseeable future. So, who will be in the spotlight?

Regarding licensee’s, that ASIC will focus on the “small end of town” is the view put forward by the director of a specialist strategic risk and compliance management consulting company, Conrad Travers, in a recent article in Professional Planner. Travers pointed out the facts outlined above and more: ASIC were beaten up in the Royal Commission for their compliance performance and have had their budget increased by nearly 20%, to almost half a billion dollars for 2020-21. Along with their “litigate first” strategy, ASIC are starting to use data analytics to target advisers. With the exit of so many of the biggest players, Travers says it is reasonable to expect that the smaller and mid-tier licensees will come under increased scrutiny. The advice Travers gives is that “businesses need to plan for the fact that ASIC could come into their business. Explaining something away or saying, “I haven’t done that sorry” will no longer cut it when you run a licensee.”

It would be naïve to think that even smaller licensee will not face scrutiny from ASIC as well. The new code monitoring body (in whatever shape it finally takes) will be linked to ASIC and one single complaint could spark an investigation. It should be understood in the industry that ASIC will find a way to attempt to manage the hundreds of smaller licensees under their remit, particularly considering this licensee fragmentation is the direction the industry is continuing to head toward.

This fragmentation is illustrated in our chart, which shows the continuing growth in the number of licensees authorising advisers over the last 5 years, and the breakdown of these licensees according to size. 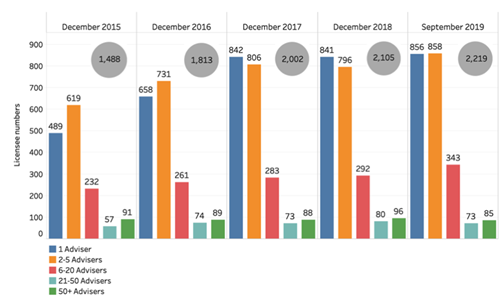 While the number of licensee’s is growing, in terms of adviser numbers, there are 158 licensees with more than 20 authorised representatives, representing just under 18,000 of advisers (73%), and just 48 licensees that have more than 100 advisers on their books. These 48 mid to large licensees represent 12,500 people - just over half of all advisers (51%), and it’s a fair bet they this group of licensees would most likely be the initial focus of any scrutiny ASIC decides to impart on the industry in the coming months. How ASIC plan to keep an eye on the 93% of licensees with 20 advisers or less should become more apparent in the not too distant future as well.

"My compliance support is significantly better than what it was working under a Bank owned licensee. As the owner of a small AFSL, the knowledge that I go directly to goal and do not pass go, governs everything we do. We put the advice needs of our clients first. Many advisers do that now but unlike large licensee there is no direct accountability for it's advisers and the industry has been damaged by advisers jumping ship. If Doctors can do it then advisers can do it also. Doctors are not licensed by drug companies after all. Of course, there is a need for large licensee's particularly for starting advisers and advisers that want to do high risk strategies but being licensed under a large product manufacturer is fraught with compliance risk."

"The move away from institutions and product developers running licensees is fantastic, its more unbiased advice for consumers. The industry needs to remove its reliance on the commissions paid from insurance providers, moving to fee for service of level commission rates. I moved from an institution in the last 12 months that was rampant with conflicts of interest and its head stuck in the sand to the change of the industry. Now being in 5 adviser self licensed practice has shown me how simple giving complex financial planning and wealth management advice should be, not just pressure to sell products. "

"I maintain there is no way ASIC will be able to regulate the nearly 2000 small licensees. It will only be after something goes wrong that information comes to light."