Are Higher Qualification Requirements Leading To An Adviser Exodus?

There has been much speculation that the new qualification regime facing advisers may help contribute to a crash total adviser numbers. It has been suggested across much of the industry media that this, combined with changing remuneration models may create potential reductions of 30% to 40% of all authorised representatives. While only time will tell if these predictions are correct, here we take a closer look at one of these catalysts that will no doubt influence the number of financial advisers in the industry in the short to medium term, educational qualifications.

There has been much speculation that the new qualification regime facing advisers may help contribute to a crash total adviser numbers. It has been suggested across much of the industry media that this, combined with changing remuneration models may create potential reductions of 30% to 40% of all authorised representatives. While only time will tell if these predictions are correct, here we take a closer look at one of these catalysts that will no doubt influence the number of financial advisers in the industry in the short to medium term, educational qualifications.

Recent announcements have seen of a reprieve for advisers – at least in terms of timeframes.  After sustained lobbying from industry and member associations, the new Financial Services Minister, Senator Jane Hume announced a one-year extension to complete the FASEA exam. A potentially more notable extension that was also announced was an extra 2 years to meet FASEA qualification requirements.

A 2-year extension to become degree qualified could act as somewhat of a handbrake on a rush of advisers exiting the industry, as it gives advisers debating their future more time to solidify their plans. While the FASEA exam requirement still needs to be completed by the end of 2021, that should be more of an “inconvenient formality” for most practising advisers. Early results from the exams already held indicate a pass rate of over 90%. Potentially the more formidable obstacle for ‘under-qualified” advisers is the bachelor’s degree qualification.

Adviser Ratings preliminary analysis indicates there are about 40% of advisers not currently qualified to that level, and many more without FAESA approved degrees. The decision to take on a degree, which could take up to 3 or 4 years of full-time study, is certainly weighing heavily on many advisers – particularly those closer to retirement than their younger peers.

However, most advisers will not have to start from “scratch” and will get credit and recognition for prior learning. These advisers can obtain qualification through Recognition of Prior Learning (RPL) streams which their qualifications (including “relevant” – but not “approved” degrees) to date count for credits to waive the number of courses in the educational pathway. This means many advisers will not have to undertake a full bachelor’s degree from beginning to end.

So, are the additional education requirements contributing to advisers leaving the industry? We’ve done some analysis on the educational qualifications of the 950 or so ceased advisers from Q3, which has thrown up some interesting results. 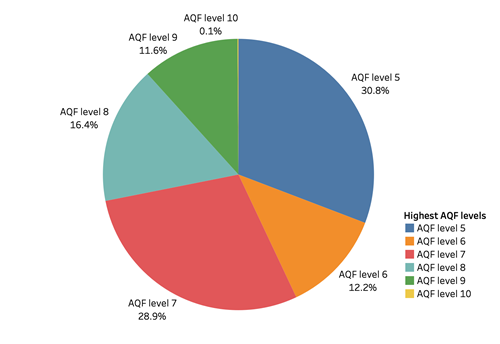 This means that around half the advisers who ceased authorisation this quarter were appropriately qualified, and half were not. These results on their own indicate it would be difficult to blame the heightened regulatory qualifications for adviser cessation at this point. We will follow these numbers with more rigorous analysis in the coming months to help determine the strength of any link between adviser qualifications and adviser cessation.

We must also factor in the exceptional transformation the industry is currently going through. With Institutional dominance evaporating before our eyes, migration of advisers from one licensee to the next is occurring at a greater rate than any time in the last decade. This means we cannot interpret ceased advisers’ numbers as indicating advisers are leaving the industry for good. As we have seen with almost 250 advisers this quarter, many ceased advisers will return before long. We would expect the “returning adviser” dynamic to continue as more announced licensee shutdowns and mergers take place.

The other mitigating factor that stops us from reaching a definitive answer regarding the relationship between adviser cessation and qualification requirements at this stage is the deadline extension. The new deadline of January 1, 2026 is over 5 years away, giving advisers a further two-year buffer in which to determine whether whatever additional study they may have to undertake is worth their while. This reduction of time pressure may be just enough encouragement to keep many advisers who would have otherwise left the industry, engaged.

We'd love to hear advisers thoughts about remaining in the industry, and how much the qualification regime is factored into the decision making process.

"Realistically why would you become an adviser now? If you can't answer that question then why would you stay? I find it is interesting that people with degrees are leaving but potentially they are also able to get better paying jobs without the consistent threat of being sued and your income taken off you by the government."

"I agree with every financial planner that's going through this. Experience has not been measured or thought of by FASEA. The FPA is still pushing CFP instead of banding together and making an argument that experience in the game does matter. Has anyone ever thought about Work Shopping experienced planners across the line instead of exam and assignments ?Do we need to go back to school the same way as a uni student? The pressure of time, exams and assignments (which is what we've already been through) is what's hurting us. Take it away. Have a 2-3 day workshop on each topic and work us across the line. DONE. I have 18 years industry experience as a Senior FP and can provide full financial advice right now. BUT. In 2024 or 2026 I can't. What a JOKE. "

"Our Business has been advising clients for 32 years and we have a 100% success rate with all our clients Life Insurance claims. We have vast experience and our clients range from Sole traders to Corporate entities turning over, up to a Billion dollars a year. Yet on 31st December 2025 I will be qualified and the next day, I will no longer be qualified to advise my clients, because I will not hold a piece of paper that has for the most part, NIL bearing on what service I, my partner and staff provide. The world has gone insane when the most qualified and experienced advisers are forced out because the education mafia has taken control of the asylum. It is not about numbers of advisers, it is about the numbers of experienced advisers who contribute to the Industry in immeasurable ways for their clients, being forced out, so inexperienced advisers who will not have the trust of Business clients, be allowed to show how many bits of paper they have, which quite frankly, does not cut it with Business people, who want their advisers to have more knowledge than them. It is being bandied around that our generation of advisers can just give up being able to provide advice and instead mentor younger advisers. Great in theory, bad in the real world. My Business needs me to generate revenue and I for one are not inclined to take on more risk of allowing a new adviser to try and replace my skill set and earning capacity, while I also have to pay that persons salary and additional expenses from an increasing cost base and declining upfront revenue. The risk to my Business, does not warrant the limited reward, with the end result, a worsening Under-insurance epidemic and Multi Billion dollar blow out to the budget, when thousands of advice practices like mine pull the plug unless there is a overhaul of the system that has become unworkable."

"I think some will exit due to education but at the moment the exodus is the cutting of Grandfathering and especially those with significant debt are taking any job they can to support the debt as their business will be largely worthless in 13 months. There is also a large percentage of people fed up with change and the compliance burden that has made it almost impossible to provide advice to a large swathe on the community."

"I am a General & Life Insurance (Risk) Broker, NOT a Financial Planner. In 2025 I will be aged 61, and will cease providing Life Insurance Advice, and/or retire early. I see absolutely no sense in Life Risk being treated in the same was as Financial Planners - when I DO NOT provide advise on Share & other investments, along with retirement strategies. My sole reason for practicing in the Life Risk area is to ensure my General Insurance clients have a quality Income Protection plan, along with Keyman & Partner Buy/Sell. I have spoken to lots of other Life Risk ARs who are in the same & older age group and they will likewise be finishing up and not completing a Degree. Note: I have been providing Risk Advice for 38 years, and can obtain RPL for 16 of the 24 subjects. The cost of doing these 8 subjects is not justified considering the halving of my income in this space."

"Can I ask is the 2 year extension past through parliment or are we thinking it will happen as a matter of course. Afterall there is another election before then and the Labour side of politics I thought were against any extension of the FASEA exam and the Degree Qualification dates"

"I predict that having to get degree (or equivalent) qualified will send many out of advice but we won't see a big rush now that there is another 2 years. The thing that will really kill is rem/commission changes. No money = no business."

"I've spoken to a number of advisers who aren't going to stay in the industry despite having decades of experience, primarily because they have no intention of meeting the education requirements. They commented they can see no advantage to them in studying when they're so close to the end of their working life. The extension of the educational time limit means they'll have another 2 years of working life before retiring a couple of years early. Both intend sitting the FASEA exam, but that's it!"