One of the most unforgettable experiences of my life was witnessing the migration of wildebeest through the plains of Africa, but I couldn’t help thinking how similar the wildebeest are to many investors!

One of the most unforgettable experiences of my life was witnessing  the migration of wildebeest through the plains of Africa. Every year three million of them move in a big circle from the southern part of Tanzania through to Kenya as they search for new and better grazing.

I was privileged to be a witness to this enormous migration as they reached the Mara River in the Serengeti. I was lucky to be present on the banks of the river at over twenty crossings. It was nature at her best, but I couldn’t help thinking how similar the wildebeest are to many investors! 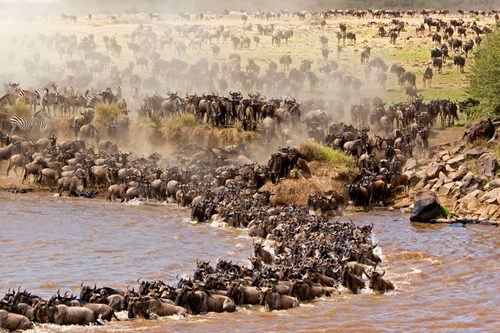 The Migration Itself Is Instinct

The wildebeest follow their instincts to move north for better grazing. However, all around us there was lush vegetation - which they ignored. They were migrating as a result of instinct rather than necessity. And by doing so they were taking unnecessary risks. Investors do the same. It is very difficult to get investors to understand that there is no point taking risk you don’t need to take. Few even know what return they need to achieve their cash flow objectives. They simply want the highest possible return even if they don’t actually need it for their desired lifestyles.

It seems that the migration creates tension and as they congregate on the side of the river they get easily spooked. It only takes one to begin running in one direction or another and very soon others follow – sometimes creating instant stampedes. It wasn’t uncommon for a stampede in one direction to meet a strong flow heading in the opposite.

Investors are the same. They get more and more skittish as the tensions rise when the media starts talking about potential market corrections. Investors want the maximum return and get out just before the collapse. It often creates stampedes to or away from investment categories with no particular logic based on underlying fundamentals.

The First One In Is The Most Careful

I noticed that a number of them seemed to investigate how best to cross the river. Initially there is nervousness, uncertainty and turning back. Then one takes to the water slowly and carefully - checking for the “risks”. The first one seemed to do a lot of testing (we might call it research) but it is not too long before the rest of the wildebeest are charging – even diving - into the water. But as the current pushes them further downstream, they are crossing in a completely different place. The river has changed. They have assumed the risk is the same but in reality it has increased quite significantly as crocodiles, rocks and congestion become factors.

How many times do you hear investors point out that some friend or colleague that they respect has made a similar investment and therefore they feel safe! I heard this only recently when an investor into a fund told me that, “It must be okay because James Packer has invested in it”. What this investor didn’t realise is that Mr. Packer was also part of the management company and was deriving benefit from investors fees whilst probably paying  far less himself. His risks were significantly different but later investors had assumed they were the same.

They Have Short Memories

One of the crossing spots was very rocky with strong currents. Previous crossings had resulted in a number of fatalities and carcasses littered the other side of the river, with hundreds of vultures and a few hyenas gathering to feed. Yet the wildebeest didn’t notice the obvious signs of risk even though there was a much safer spot upstream not more than 500 m away. They preferred the path they knew and seemed blind to the risks.

We see this same kind of behavior amongst investors who have a strong bias towards local assets because that is the path they have always followed. They’re familiar with the names and can’t see the risks. 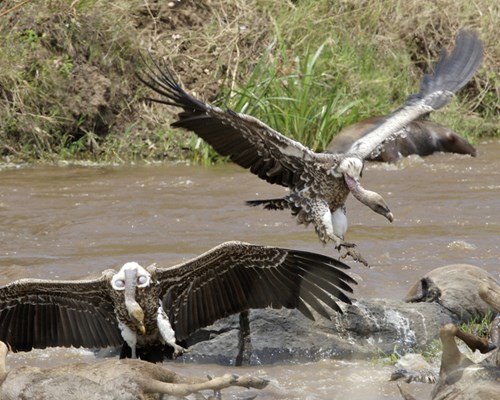 Death And Despair Bring Out The Uglies

There’s no leniency for the weak and the ‘undertakers’ of the wild are not pretty nor do they have compassion. They have a job to do and they are opportunistic. There is no mercy.

Just as there are the Big  5 of Africa, there are the 5 Uglies as well, one of which  is our wildebeest: Three are ‘undertakers’ and were present in large numbers - vultures, marabou, stork and hyena were having a banquet - whilst the last member is the warthog.

The lappet-faced vultures have a particularly confronting role: their job is to open up the carcasses starting with the soft parts, eyes, anus, and ears. This makes for an undignified exit for the deceased.

And so it is with the carcasses left behind by investors. There is no pity  or dignity for failed investors even if they have made honest mistakes. That’s why avoiding bad decisions is more important than making good ones.

The Inexperienced Freeze Under Pressure

The experienced adults kept going - even where they got caught in currents and swept away. But often a calf, either because of exhaustion, inexperience or fear, would be left behind. Perhaps the stress becomes too much and they can’t go on. Sometimes they do and learn from the experience. Sometimes they don’t and perish.

It is very common for investors who get frightened after a terrible investment experience to also “freeze”. History is riddled with such examples and sometimes even entire generations are scarred by these experiences and “freeze” for the rest of their lives. The great depression caused our grandparents to “save for a rainy day” and were petrified of the stock market. Successful investing requires learning and adaptation.

Momentum Sucks Them In - Even Where They Had No Intention

When the first wildebeest start crossing the river, it  creates a greater and greater momentum. Eventually they are charging towards the river from kilometres away as they follow the instincts of the herd. It is like a vortex over which they have no control.

Again, investors are similar. When an asset class is running hot, it creates such momentum that the average investor finds it irresistible. In the book “Popular Delusions and the Madness of Crowds,” Charles Mackay chronicles many such events - including,  of course the legendary "Tulip Mania", and the "South Sea Bubble". In our own lifetimes, we will all remember the "tech bubble" and the frenzy that it created.

The Call Of A Mother Is Irresistible

As they cross, the chaos creates confusion, and in many instances mothers and calves are separated. We saw many calves reaching the other side only to stop and turn back towards the dangerous river, calling for their mothers. On one occasion, it took about 10 minutes for enough of them to have the same desire and begin a mini crossing back the other way. They headed directly towards greater danger but they couldn’t stop themselves. The call of a mother is irresistible. Investors are often encouraged by their friends to invest together. It’s difficult to resist a friend’s suggestion but it too often offers only a false sense of security.

The Noise Is Overwhelming

One of the most surprising aspects of the migration is the noise. So many wildebeest, all calling at the same time. It’s so loud that every one of them must be calling – either to find a lost one or to remain together. The confusion and anxiety is palpable.

Volatile investment markets create the same cacophony. The media and networks create so much “noise,” that investors become anxious and confused - and to them everyone looks like an expert.

The Timing Is Unpredictable

We had waited and watched for a number of hours, and were about to drive away , when without warning a new crossing started. It went on for nearly two hours.

Many investors think, that the experts should know when it’s the right time to buy or sell. The truth is, that is impossible to know exactly when things will happen, and sometimes markets don’t seem to make sense. Don’t expect to be precise when investing.

Buying when cheap, doesn’t mean the asset won’t get even cheaper. Selling when expensive, may mean missing out on further price rises. As Warren Buffett says, “the markets will remain irrational for longer than the investor can remain solvent.”

It Takes Leadership To Turn It Around

Another surprise was how quickly a crossing would stop. All it takes is one wildebeest to turn around, and the momentum vanishes. Calm returns to the herd.

Sometimes, all an investor needs is someone to remind them of the principles and mistakes to be avoided - to keep them from following the instincts of the herd.

"Great article on why you should use an unbiased third party, like an adviser, to help you invest wisely instead of instinctively."

"I've always wondered why my parents are so keen on bluechip Australian stocks - there are lots of great investment opportunities out there, if you know how to read the basic financials (or have an adviser who can)."

"Love your comment around "few know what they need in returns to achieve their cash flow objectives. My husband and I have no idea what is an "acceptable" return on our stock investments, in terms of our plans for the future. I once read "Rich Dad, Poor Dad" and I thought that the higher the risk, the better the return was where I should always aim. Thanks for providing food for thought..."