Alan Kohler on China, Trump and the Global Economy

The Constant Investor is the home of Alan Kohler’s writing, shining a guiding light on the issues that matter. This is a taste of one of Alan Kohler’s recent weekly overviews, joining the dots on China and Trump, as well as an outline on the global economy’s impact on Australia. 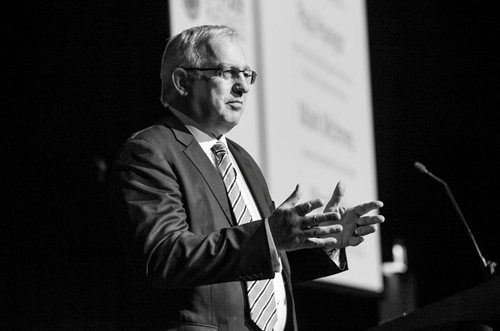 Prominent finance commentator Alan Kohler spoke at the recent Adviser Ratings FinForward 2017 industry event. The Constant Investor is the home of Alan Kohler’s writing, shining a guiding light on the issues that matter. Alan contributes this week by joining the dots on China and Trump, as well as an outline on the global economy’s impact on Australia.

Ask anyone what was the biggest surprise of 2016 and they will probably answer: No.1 Trump, No.2 Trump, No.3 Brexit.

They were big surprises, to be sure, although maybe they shouldn’t have been, but I think the most important surprise might have been something else entirely: the resilience of the Chinese economy. Specifically, it was China’s massive fiscal stimulus in late 2015, early 2016, that turned the economy around.

I remember at the start of last year, while I was having long service leave, hardly a day went past without some scare story about how China was about blow up, or implode, because of its slowing economy and massive debt load.

But everyone forgot that this is a government unconstrained by normal conventions of capitalist economies, and has no Opposition to whine about the budget deficit. What’s more, it fully controls the collection and publication of statistics.

So the economy stopped shrinking and stabilised. Here’s a chart from Shane Oliver at AMP: 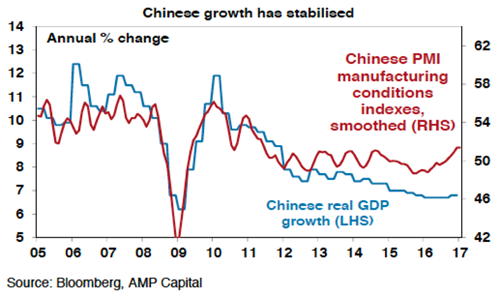 Did it really stabilise, or did the statisticians get new instruction from the Politburo about where to start their reverse engineering from?

Doesn’t matter. There are no other figures to contradict the Chinese National Bureau of Statistics, so what they say is happening is what’s happening.

So real estate rebounded, construction picked up, commodity prices started rising again. Supply restraint, also engineered by China, added to that and caused commodity prices to fly in the second half, having a huge impact on the Australian economy

This, it seems to me, is what started the reflation trade in the middle of last year and is therefore the main cause of the re-igniting of the bull market – not Trump. It’s the reason the Australian resources index rose 80% between January 2016 and January 2017.

It follows that the key risk for equities is that this re-acceleration of Chinese growth can’t be maintained.

Louis Gave of GaveKal Research calls it a “material possibility” (is that a probability? – ed.)

“After last year’s panic,” he wrote this week, “everyone is well aware of the challenges confronting China: too many zombie companies that only survive thanks to debt handouts and inefficient allocations of capital, deteriorating demographics, a population that is only too happy to escape a polluted country with an archaic education system, etc… Meanwhile, Beijing withdrew its fiscal stimulus last summer, and started to tighten monetary policy—if only marginally—as the winter rolled around.”

And a key risk in that context is if Donald Trump really does pursue a border adjustment tax, which would be likely to lift the US dollar, a lot. Emerging markets do poorly when the US dollar rises.

Now, Trump is dead against a strong dollar, so it follows that the more he talks the US dollar down and pursues weak currency policies, the more the “reflation trade” will run and higher equities markets go.

If he gives up on that, and goes for a border adjustment tax instead, the sharemarket will hit an airpocket and probably fall violently.

So while China launched the global rally, Trump can shoot it down. 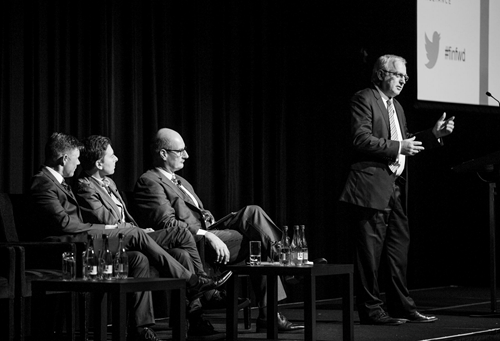 It’s becoming clearer with each passing week that the global economy is rebounding. Secular stagnation is OFF; reflation is ON.

Manufacturing output is growing at 3.2%, the fastest growth in three years. The United States, which was the world’s weak link for so long, is gathering steam.

Along with this, inflation is accelerating. The global CPI increased 2% last year and is on track for at least 2.5% this year, and in recent months it’s more like 3%.

This augers very badly for bond markets. The US 10-year yield spiked from a low of 1.36% in July to 2.6% in December and has basically tracked sideways since then, but if the data continues in the current vein it will be testing 3% before long.

It should be good news for share investors: money will flood from bonds into equities looking to trade the recovery and escape the coming bond bear market. The trouble is that equities are likely to “de-rate” at the same time – that is, valuations will be reduced because of rising interest rates.

Australian equities start this process a bit less expensive than American ones.

Yield stocks will face particular headwinds as interest rates rise, but it shouldn’t be too hard to tack into this, by concentrating on oligopoly stocks like the banks, whose profits are likely to be protected by market strength.

Stocks that will suffer are those with vulnerable earnings as well as lower valuations, such as REITs (real estate investment trusts) – especially those with big retail exposures.

Scentre Group, which owns the Westfield malls in Australia and NZ, managed to get the valuers and auditors to tick a $1.5 billion revaluation in the latest 12 months, but at the same time management announced a big capital spending programme to try to stay ahead of the curve, explicitly recognising the challenges ahead.

They’re trying to reposition shopping malls as “community centres”, which is really all they can do: the shopping mall oligopoly is being disrupted by online shopping, and specifically the coming of Amazon.

Rising bond yields will be a double whammy for these stocks, unless they can quickly transform the malls to get people to keep coming to them.

With daily reporting on companies, funds, research and Alan’s interviews with the influencers of the investing world, The Constant Investor provides the context to enable you to make informed financial decisions. You can have access to Alan’s daily updates and full archive at theconstantinvestor.com. It’s just $1 for the first month.