In our recently published Musical Chairs report on adviser movements in the industry, we identified that the overall industry shrank by 3% in terms of total number of authorised representatives. However, we can reveal here that this drain was offset by a large cohort of previously ceased advisers returning to new dealer groups and re-engaging in the industry. We also note a surge in advisers switching between licensees, which is up by 70% from the previous quarter.

In our recently published Musical Chairs report on adviser movements in the industry, we identified that the overall industry shrank by 3% in terms of total number of authorised representatives. However, we can reveal here that this drain was offset by a large cohort of previously ceased advisers returning to new dealer groups and re-engaging in the industry. We also note a surge in advisers switching between licensees, which is up by 70% from the previous quarter.

There were 949 ceased advisers in Q3 - a high number without question, but well down on the 1750 total ceased figure in Q2. There were only 10 “brand new” advisers registered, continuing these diminutive figures since the new regulatory requirements were introduced at the beginning of the year.

Though nearly 950 advisers ceased their authorisations in Q3, total adviser numbers shrank by "only' 700 over-all. The difference between the ceased number and the overall reduction number is accounted for by over 240 advisers transitioning back (returning) into advice land after being previously ceased.

This returning dynamic along with the continuing rationalisation of the industry led to a massive spike in switching adviser movements during Q3.

Not Necessarily Gone For Good - The ‘Returning Dynamic’
Our first chart shows all new, ceased and switching adviser movements since the start of the year. 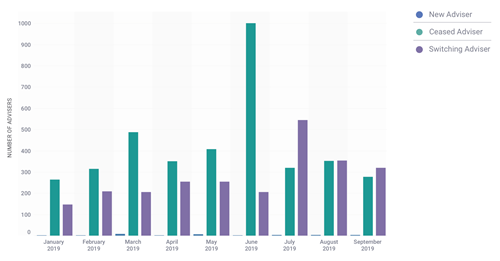 We can see the massive spike in ceased advisers for the month of June, which coincided with the end of the financial year. This spike in cessation in Q2 was followed by an increase in switching advisers who have gone from one licensee to another (illustrated in purple), in Q3.

Our chart shows that for the first time this year, each month of Q3 saw more advisers switching into new licensees than there are ceasing. This illuminates a “returning dynamic” that we have not seen before and demonstrates that a large surge in ceased advisers does not necessarily equate to an acceleration of advisers leaving the industry. On the contrary, we might expect our future analysis to also show this returning dynamic, with many of ceased advisers re-establishing their authorised status after a short hiatus.

Switching Advisers – One Big Switch?
This movement saw a 70% increase in the number of advisers moving between licensees in Q3 compared to Q2. While the increase in gross adviser movement numbers is a standout compared to previous quarters, it should be noted that proportionally, advisers’ movements between institutional, aligned and private licensees has remained remarkably similar to Q2. 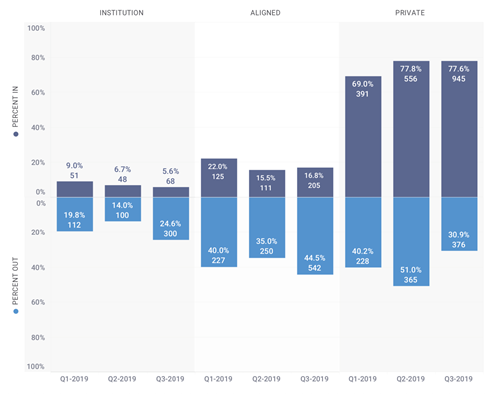 This is reflected in our second chart, which shows the breakdown of adviser movements between different licensee types. It indicates that similar to Q2, in Q3 nearly 80% of advisers are switching into private licensees. The other significant observation to note from Figure 6 is that nearly 70% of all advisers switching in Q3 came from institutional or aligned licensees, while only 30% switched out of private licensees – by far the lowest figure for this metric this year. These figures reflect Westpac's exit from the licensee space during the period, and the transition of those advisers to mostly privately held licensees.

These numbers represent a continuation of the established trend of advisers preferring for private licensees as a destination of choice over institutional and aligned licensees. Just a note of our use of the word “preference” here - the fact that institutional and aligned licensees are shutting down contributes to this trend so as the major players continue to exit the wealth space, the option to switch there is removed. You might say that rather than advisers “preferring” private licensees, increasingly, they have a restricted choice.

We’ll continue to bring you more detailed analysis of adviser movements and industry trends in the coming weeks.

"I'd say many more of the ceased advisers from June will be back within 6 months. Thankyou for the ongoing work bringing this info to light."