Is the big bear looming? If we listen to doomsday investor billionaire George Soros, the Royal Bank of Scotland and Société Générale, we could be heading for a calamitous 2016 with the 6% decline on the stockmarket in the first few days of the new year just a prelude of what’s to come.

Is the big bear looming? If we listen to doomsday investor billionaire George Soros, the Royal Bank of Scotland and Société Générale, we could be heading for a calamitous 2016 with the 6% decline on the stockmarket in the first few days of the new year just a prelude of what’s to come.

In recent days, we have had a significant uptick in the find an adviser function on our website and a few queries from investors wondering what they should or should not do. This is on the back of a query from Robert at Manly Vale re GFC Mark 2 prior to Christmas (see response here). As always, the first piece of advice is to speak to a qualified and competent financial adviser and talk through your detailed concerns with them.

So, why the recent doom and gloom? In short, Chinese growth is slowing and there are fears that the rest of the world will catch its cold - for some like George Soros, it’s not a cold but a deadly new strain of bird flu. Chinese policymakers are devaluing its currency, attempting to prop up growth by making its exports cheaper and competitive. With this having little impact there is a concern that China may have lost its ability to control their growth rates, and subsequently, ripple effects will be felt throughout the global economy.

But will this slowdown result in another 2008 scenario?

RBS analysts believe the world is in a global recession and 2016 should be a year investors think about a "return of capital, not return on capital." With this headline, along with alarmist media headlines (bad news sells!) circulating in Australian publications, it’s no wonder we’re fearful.

And then you have perma-bear, American investor George Soros, predicting Armageddon – as one poll suggests George Soros is the single most destructive leftist demagogue in the country. Fear often breeds fear as they say, and the fear contagion can be very destructive and self-fulfilling. 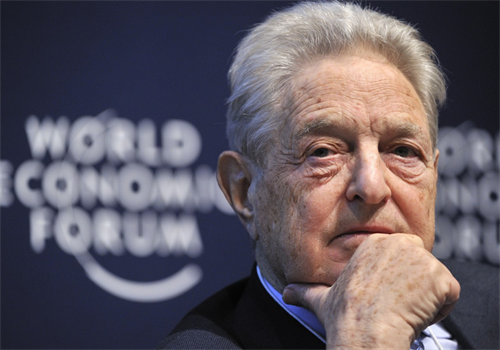 “China can't remain immune from cycles as it haltingly liberalises its economy. It's part of growing up. The great fundamental underpinning its economy though - the desire of people to have a better standard of living and their willingness to work for it - isn't changing and has a long way to run.

Beijing is not without ammunition to try to limit the pain of the nation's transition to relying more on consumption, but even if you're prepared to buy into the RBS supposition - that China's about to have a hard landing - .....China taking the world with it needs to be tested.

That has been rationally done by US Nobel prize-winning economist Paul Krugman, who is quite bearish about China but doubts that the impact of China's problems on the rest of the world will be as bad as the RBS types scream. He nonetheless admits to "doubting the courage of his complacency".

"The good news is that the numbers, as I read them, don't seem big enough," writes Krugman. "The bad news is that I could be wrong, because global contagion often seems to end up being worse than hard numbers say it should."”

The important thing about "the numbers" is that China's financial markets aren't as entwined with the rest of the world as US markets were when the great bank fraud of the subprime crisis hit [GFC of 2008].

In times when bankers are reaching into their pocket for their anxiety pills, and as customers and clients grow fearful, a good financial adviser is more important than ever to ultimately keep you well informed and help you understand the risks involved:

We spoke with Fergus Hardingham, Platinum Adviser of FM Financial Solutions Pty Ltd, to get his take on the state of play and the growing nervousness we are seeing from investors visiting our website:

We have no idea if Soros or RBS is right in regard to their view on the risks to the markets in 2016.  We do think that the RISKS have been building for some time as a result of low rates and accommodative policy pushing asset prices up and increasing gearing levels, and that as a result it would be prudent to take some RISK off the table, and reduce the exposure to LONG ONLY strategies that only make money in a rising market (which we have been doing for some time).

Look at increasing cash allocations and the use of investment strategies which can benefit from falling markets, such as long/short strategies and other alternatives.  Investors are unlikely to be paid sufficiently for taking on risk going forward, so being more cautious would be seen as an appropriate way to proceed regardless of the investor's risk profile and risk tolerance…a return of 0% is better than one with a minus sign in front of it…

During the 2008 global financial crisis one ‘expert’ was heard to say that  “anyone under 50 years of age should dance on the tables” because all future contributions to super were going to buy far more units due to the drop in prices.  You don’t have to be under 50 years of age to feel this way.  If you have a real financial plan in place, you can look forward to market drops, not dread them.

During volatile times investment markets will deliver you a report card that will grade you on the quality of your ability to make smart financial decisions.  Are you doing it alone; making decisions based on a patchwork of news bytes?  Or do you have an objective, independent third party, like an independent financial adviser on your side of the table helping you make quality decisions?

If there is a chance you’re going to fail this test, seek an independent adviser. The cost of a bad decision is too high.

Market fundamentals, fraudulent activity (as we saw in the 2008 US sub-prime crisis leading to the GFC) and investor psychology are so intertwined and so difficult to predict, not even the experts are going to agree. As can be seen by the forecasts of the ASX200 by year’s end:

This disparity is far starker when graphically represented: 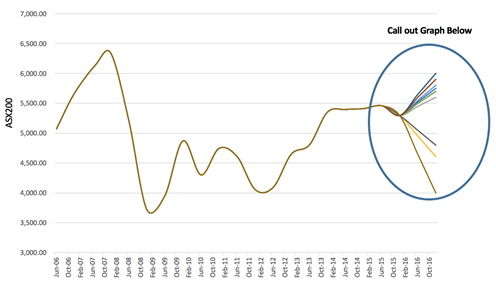 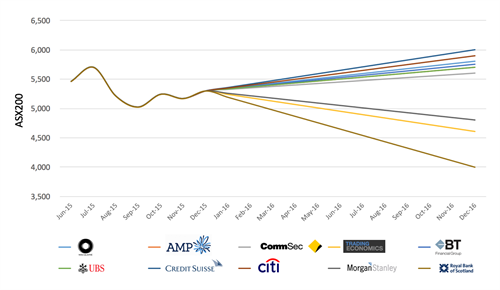 The range in predictions represents a difference in size of market capitalisation of about 30% on the ASX200 - or around $400 billion dollars!

Our advice, seek a financial adviser (www.adviserratings.com.au) who will have strategies at hand to help you understand and manage your risks, relevant to you.

"Nice article but not sure why you chose a quote that calls Soros "single most destructive leftist demagogue" in the country from a site that has "Powerful conservative voices" as a tag-line and "Guns and Patriots" as a tab. I don't see "the left" as being responsible for the GFC?? Quite the contrary."

"What a crock - economists know nothing and are never held accountable, yet the advisers are the ones everybody attacks."

"Good sane article from Switzer on this http://www.switzer.com.au/the-experts/peter-switzer-expert/outside-australia-is-worrying-but-inside-oz-is-looking-good/"

"Risk, risk, risk. Times like these present opportunities, but yes, also tremendous challenges. Have we just transferred credit risks from corporate to country on the back of the GFC? Fear is a scary thing - once it starts, it is very hard to stop. My advice to Adviser Ratings customers - steer clear of advisers selling you margin loans and spruiking properties. Clear any of your debt, and be sensible enough to hold enough in cash that can see you out for a while if this is a destructive year."

"Here here, Fergus! In the words of Michael Stipe, "It's the end of the word as we know it (and I feel fine)". I call myself both a chartist and fundamental trader - I've parked myself in cash and bonds for the next twelve months. A lot of investors are still down from 2008, and may end up taking another substantial hit. The old paradigm of hold and the markets will sort themselves out are no longer at play. The dynamics of capitalist markets have totally changed, and once economists, conflicted research houses and advisers (with their 6 month Diploma educations) understand this, then the poor mum and dads won't lose their hard earned."

"The main focus of investment should be not to lose money...reducing losses / risk helps to improve compounding returns: “In my book, trying to avoid losses is more important than striving for great investment success” Howard Marks and also from Marks “Risk control is invisible in good times but still essential, since good times can so easily turn onto bad times” and If Portfolio A earns a 10% return in two consecutive years, it will have a mean return of 10% per year. So $100,000 invested will grow to $110,000 (10% increase) in year one then to $121,000 in year two (another 10% increase). Contrast this with Portfolio B, which earns a return of 30% in the first year and minus 10% in the second year, also posting a mean return of 10% per year. So $100,000 will grow to $130,000 in year one (a 30% increase), then fall to $117,000 in year two (a 10% drop). While the mean returns are the same, the compound rate of return will differ. Portfolio A earns a rate of return of 10.5%pa while Portfolio B earns only 8.5% . This difference is known as variance drain or volatility drag, which can be described as the negative relative impact volatility has on portfolio returns. Hence lose less, protect capital and compound returns. "