The dust from the journalists stampeding from the budget lock-up has barely settled following Treasurer Josh Frydenberg’s first budget, delivered last night. Coming, as it does, a little more than a month prior to a federal election, it should be expected that a fair degree of politics, promises and other pork and sweeteners would be included. And so it was, with little in the way of reform that might have further alienated a distrustful population, or provided the opposition with more spears to skewer the government.

The dust from the journalists stampeding from the budget lock-up has barely settled following Treasurer Josh Frydenberg’s first budget, delivered last night. Coming, as it does, a little more than a month prior to a federal election, it should be expected that a fair degree of politics, promises and other pork and sweeteners would be included. And so it was, with little in the way of reform that might have further alienated a distrustful population, or provided the opposition with more spears to skewer the government.

The treasurer announced that the budget would be back in surplus in 2019-20 and has pinned its re-election hopes on $300 billion in tax cuts to be rolled out over the next decade. The budget forecasts a surplus for the first time in 12 years and proposes paying off net debt by the end of next decade. As Ross Gittens writes in  Faifax media, “The Coalition won office almost six years ago promising to make eliminating "Labor's debt and deficit" its highest priority (but) it's taken all this time to get to the point of being able to budget for a surplus next financial year, during which time the debt has doubled.” Indeed, clearing the country's debt would be a big ask and require all the rosy assumptions regarding growth, employment and trade to materialise perfectly, so maybe the less said about that the better.

In an amendment to last year’s 7-year tax cut plan, from 1 July 2024, the Government will reduce the 32.5% marginal tax rate to 30% and the 37% tax bracket will be abolished. This means that by 2024-25 around 94% of Australian taxpayers are projected to face a marginal tax rate of 30% or less. This is the change that contributes most to the tax cuts, which add an extra $158bn to the $144bn in cuts announced in last year’s budget and double the projected tax relief to just over 300 billion in the next decade. The bulk of these cuts will be realised in the second half of the decade.

The treasurer announced a $100 billion infrastructure spend, much of which is expected to go to regional areas – helping out their beleaguered National Party coalition colleagues. On top of this it also announced $3.2 billion in spending for the election campaign under the heading "decisions taken but not yet announced".

The big pitch to low and middle-income earners was to announce they will pay less tax because of a more generous tax offset. The low to middle-income tax offset (LMITO) is a measure introduced in last year's budget. Under the changes announced in this budget, the reduction in tax provided by LMITO will increase from a maximum amount of $530 to $1,080 per annum and the base amount will increase from $200 to $255 per annum for the 2018-19, 2019-20, 2020-21 and the 2021-22 income years. People earning between $925 and $1730 a week will get a tax cut equivalent to about $20 a week. This is a clear election appeal to those at this income level (tradies and teachers according to many) and will no doubt provide some welcome relief, but longer term the offset may no longer apply. Given the above tax rate changes, the LITMO may not be deemed necessary in 5 years.

Some commentators believe the content of this pre-election budget will mean that the election will see the younger generation and millennials set against the interests of older generations. Apparently Labor party polling suggests that for millennials, three issues dominate their political views — climate change, housing affordability and growth in wages.

There was very little regarding climate change and housing affordability was not specifically addressed (unlike Labor’s promised changes around negative gearing). Labor's proposed franking credit reform, designed to save billions for their budget will impact older Australians rather than the under 40's.

The other factor - wage growth, has been sluggish now for over half a decade and is continuing to create a drag on the growth of the economy. In the 2017-18 budget, wage growth was projected to rise to 3.5% by 2020. Last year this projection was pushed out by another year to 2021, and now this year it was pushed out a year further. Analysis and the chart included here, provided by Peter Martin, shows that wage growth forecasts have been overly optimistic for the best part of the last decade. 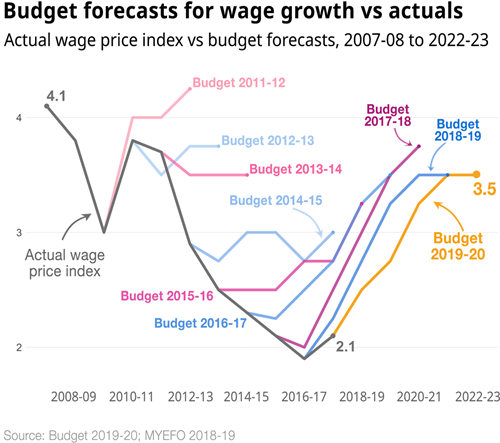 Economists argue that falling home prices, along with "lower-than-expected" wage growth, is depressing consumer spending, meaning Australia’s growth rate have been sub-optimal. Assuming, as the budget does, that economic growth will not dip below 2.75% in the near term does seem to be an optimistic view, especially given the shape of the global economy, in particular the continued slowdown of growth in China and the continued uncertainty around Brexit.

But if the budget is enough to get the coalition across the line against the odds in a month or so’s time, we might just get the chance to see if these rosy projections prove correct.

"Unfortunately I think that Union Thug is correct and fear that after taking a decade to extract the country from deficit we will once again return to the era of fiscal mismanagement. Hopefully the Coalition can terminate the white ants within and get some clear and clearly supported united leadership to continue some of the progress underway."

"Nothing in this Budget will matter. The aren't going to debate it in the next couple of days and when Labor win the election none of these promises will mean a thing. Better to look to Labor's budget reply on Thursday to see what policies are going to effect Australian in the next 3 years."